CAVITE, Philippines (UPDATED) – There was dancing, singing, free food, and a campaign jingle to the tune of Tom Jone’s “Delilah,” but if there was one thing that stood out during a birthday-celebration-cum-political-gathering in Imus, Cavite on Sunday, March 27, it was a comic book about Liberal Party (LP) standard-bearer Manuel Roxas II.

Titled “Sa Gitna ng Unos (In the midst of disaster),” the booklet tells the life of Roxas, the ruling party’s presidential bet, in a narrative that starts with the death of his younger brother, former Capiz Representative Gerardo Roxas Jr, and ends with him formally getting President Benigno Aquino III’s endorsement.

In between, the comic details Roxas’ accomplishments as Capiz representative, trade and interior secretary to former presidents Erap Estrada and Gloria Macapagal-Arroyo, and as senator.

The story includes personal details too – a mention of his only son, Paolo, and his 2009 wedding to broadcaster Korina Sanchez.

But it’s the retelling of more recent events that has sparked reactions from Roxas’ critics.

Roxas has been hit for his supposed lackluster performance in the aftermath of the storm, among the strongest to make landfall. National government then – and now – has been criticized for the slow pace of relief and rehabilitation.

His rivals for the presidency have cited complaints against him post-Yolanda as proof that he can’t lead. 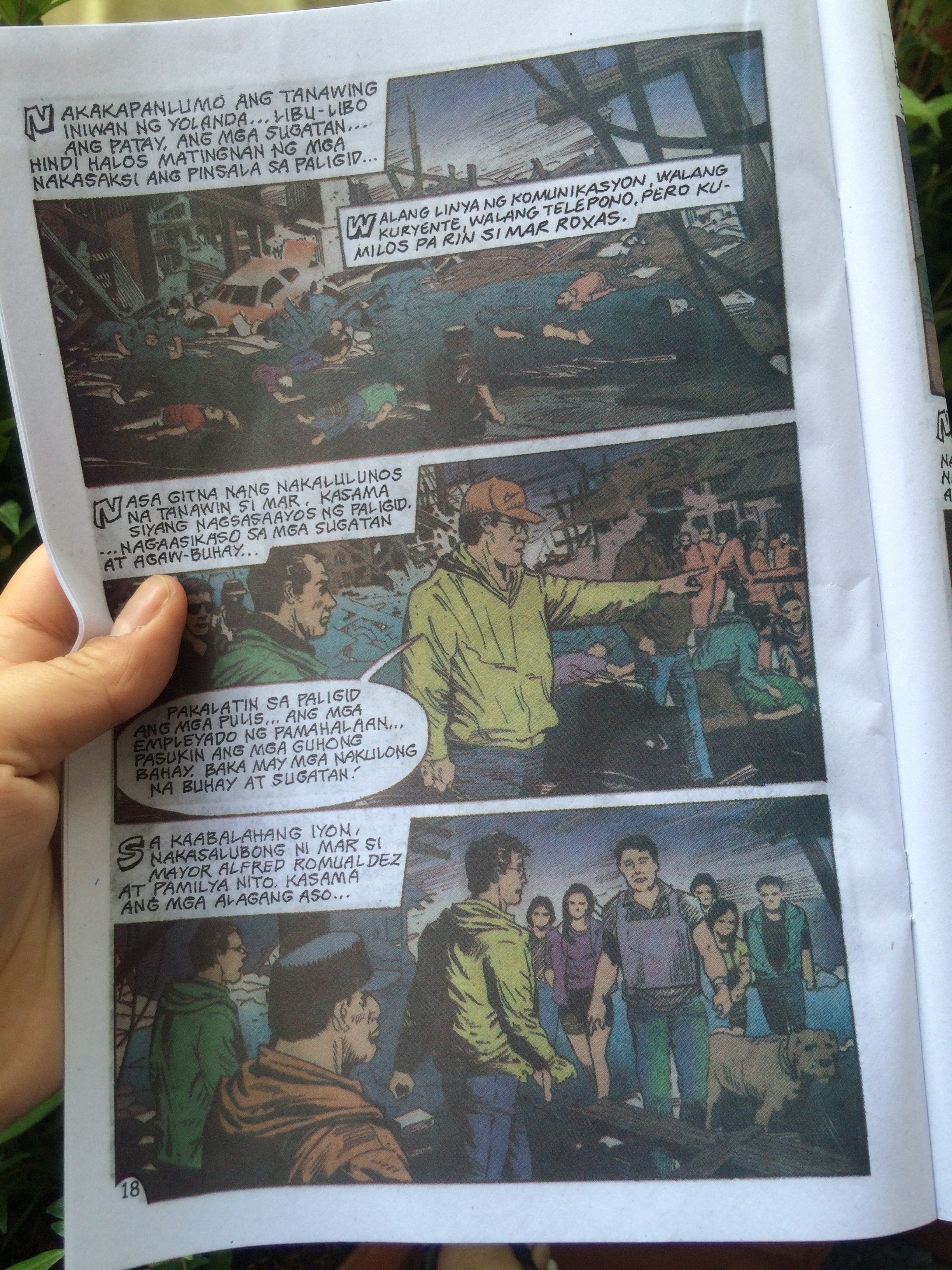 The comic made sure to debunk claims of both his electoral rivals and critics.

Roxas and Defense Secretary Voltaire Gazmin were in the province of Leyte in the days leading up to the storm, to spearhead national government’s preparations.

“Nasa gitna nang nakalulunos na tanawin si Mar, kasama siyang nagsasaayos ng paligid… nag-aasikaso sa mga sugatan at agaw-buhay (Mar was in the midst of the devastation and was among those who tried to fix what could be fixed, and paid attention to the wounded and the dying),” another panel read.

The comic mentions Tacloban City Mayor Alfred Romualdez, Roxas’ co-star in a viral video that showed the two in a meeting days after Yolanda.

(Despite his desire to help, the short disagreement was blown out of proportion by members of the media.)

Roxas had earlier cried foul over the short clip that spread online, pointing out that it was spliced. The comic made sure to mention that too.

The comic also makes mention of other controversial crises during Aquino’s administration – Typhoon Ruby and a photo of Roxas that went viral, and the bloody “Oplan Exodus” in Mamasapano, Maguindanao.

The comic ends with frames featuring Roxas’ family members – his grandfather, the late president Manuel Roxas; his father, the late senator Gerardo Roxas; his mother, Judy Araneta-Roxas, and brother Dinggoy. It does not indicate who had it made.

Thousands of Caviteños flocked to the Villa Emilia Farm on Sunday.

Among the campaign materials distributed during the gathering included baller bands bearing the names of Roxas and Robredo, as well as paper fans with Roxas’ name and face on it.

Speaking on Sunday, Maliksi called on Caviteños to support the LP tandem. Maliksi himself is not running for office in 2016 but his son, Imus Mayor Emmanuel Maliksi is gunning for reelection.

The Maliksi clan is only one of many political families who have declared their support for the LP ticket. Cavite is the country’s second most vote-rich province, with over 1.8 million registered voters in 2016.

Roxas has been lagging in surveys, trailing behind his rivals in a tight race. – Rappler.com