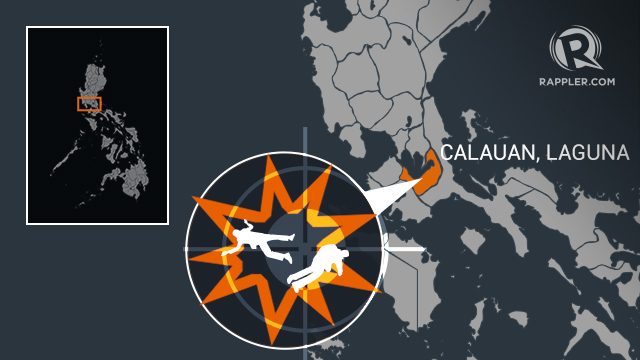 Facebook Twitter Copy URL
Copied
A reelectionist mayor in Laguna is wounded in an attack, the Liberal Party embraces the jueteng network in Pampanga, the Comelec's website is hacked

MANILA, Philippines – Barely two days after the start of the official campaign period for local candidates, a reelectionist mayor was wounded in an ambush on Sunday, March 27, that killed his two companions, including a 25-year-old candidate for councilor. It seems a portent of things to come given the violent history of local races in the Philippines.

A total of 18,083 positions are up for grabs in the May 9 elections. Excluding the president, vice president, senators, and the party-list representatives, 18,010 posts are for candidates for the House of Representatives and positions in the regional, provincial, city, and municipal governments.

Unlike in the 2013 elections, this year’s races include the president and vice president who are banking on local allies and networks to deliver votes for them. This promise – or myth – of a vote delivery system is obviously what has made the Liberal Party embrace clans and leaders that make a mockery of the “Daang Matuwid” slogan. Campaigning in Pampanga, LP presidential bet Mar Roxas and running mate Leni Robredo gamely posed for a photo-op with Governor Lilia Pineda, wife of jueteng lord Bong Pineda.

The Pinedas rose to power on account of their known involvement in jueteng – and nothing else. Asked about this, the LP duo expressed disbelief and suffered amnesia, yet again another proof that in politics, the more, the merrier.

Struggling in the surveys, Roxas is hoping that his local allies and beneficiaries of the government’s pro-poor projects will fill in the gap and make him win, as he is wont to say in sorties, in the “only survey that matters” on May 9.

In vote-rich Cebu, he’s banking on Bisaya kinship and social networks that his team put up since 2015. It’s Duterte, not the other Bisaya candidate, Roxas, who seized the “It’s time for a Bisaya” campaign peg in the Visayas region, with his volunteers putting up Facebook pages targeting voters aged 20-25 years old.

“We realized that if we gathered them and asked them to support a Bisaya, they would definitely agree to support Mayor Duterte,” says an organizer. 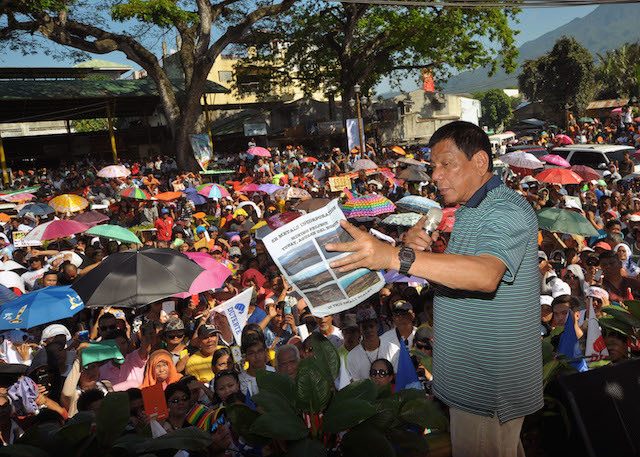 But Duterte himself has had his share of being unwelcome in an administration stronghold.

In Mambajao town in the small island of Camiguin, the Davao City mayor faced an audience of only hundreds – a small crowd compared to his other rallies. It’s small because the Camiguin local government, controlled by the LP, tried to sabotage the event by threatening local coordinators with delisting from national government projects, according to the Duterte camp.

Senator Grace Poe also faced a thin crowd in Manila on March 27, as hundreds left the Rizal Memorial Coliseum even before she and running mate Francis Escudero could speak.

They left because they couldn’t stand the heat, explained Isko Moreno, outgoing Manila vice mayor who’s running for senator under the Poe-Escudero tandem. Minutes after Moreno spoke, the crowd in the jam-packed coliseum started leaving, led by Moreno supporters, all clad in white.

Roxas had his share of blooper last week in the form of a controversial ad that was put online by the company that owns Pride detergent and whose owners happen to come from the birthplace of the Roxas clan: Capiz City.

Using children, the ad served as a “reminder” to voters and appeared to attack Roxas’ rivals. Each featured kid asked: Would you vote for a thief, someone who kills, or a candidate who is unprepared for the presidency?

Various themes of this ad have aired on radio, too. But the latest online version was taken down on March 24, hours after Rappler wrote about it. The poll body also made a last-ditch effort to persuade the SC to change its decision allowing Poe to run for president. In appealing the court’s verdict favoring Poe, a Comelec commissioner said it wants to avoid “political instability” if Poe wins the presidency.

Bloopers or delays notwithstanding, we will try to make relevant information accessible to you anywhere and anytime you want it.

Our pages on local candidates and contests, for example, are live, updated as additional information – and submissions by netizens – come in.

Rappler has a page for each of the 1,489 municipalities, 145 cities, 81 provinces, and the special region of the Autonomous Region in Muslim Mindanao. These local pages feature:

And have you found your match yet? Review the issues closest to your heart and check if any of the presidential candidates shares your views. On Rappler’s election page, you get to meet, compare, match, and explore. – Rappler.com