WATCH: Erap vs Lim vs Bagatsing in Manila race 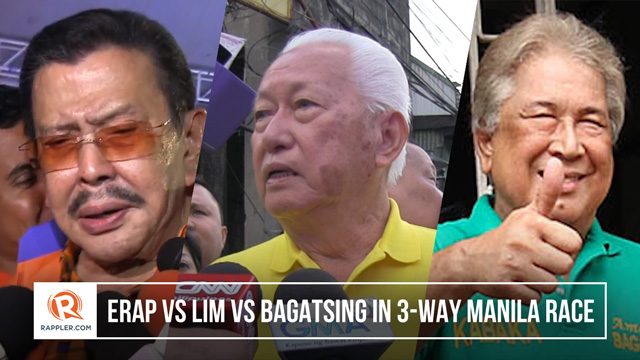 Facebook Twitter Copy URL
Copied
A re-electionist, a former mayor, and a congressman fight for the mayoralty of the city of Manila

Two of them had their shot at running Manila, while the other is trying to follow the footsteps of his father, former mayor Ramon Bagatsing. They all want to get the chance to restore the nation’s capital to its glory days.

The battle for Manila begins.

Massive campaign rallies mark the kick off of the official campaign period for local bets on Monday, as the ruling party attempts to regain control of the bustling Philippine capital.

Lim lost in 2013 to Estrada, patriarch of the influential Ejercito-Estrada clan.

It was a bitter fight that many saw as a proxy battle between the ruling liberal party and the opposition United Nationalist Alliance, headed by now presidential candidate Vice President Jejomar Binay.

Lim is still backed by the ruling party, headed by standard-bearer Mar Roxas.

On Monday, he formally announces his support for independent presidential candidate – his goddaughter –  Senator Grace Poe.

Lim seeks to downplay the tirades of 2013 but in the same breath, accuses Estrada of stealing that election.

Manila is key for several reasons.

Aside from being the Philippine capital, it’s also vote rich, home to nearly 1 million voters.

Wherever the LP goes, they push for continuity. But here in Manila, it’s the promise of change.

Which mayor will prevail?

Editor’s note: An earlier version of this story referred to Representative Amado Bagatsing as former Manila mayor. This has been corrected.