Poe defends choice of Querubin as her anti-crime czar 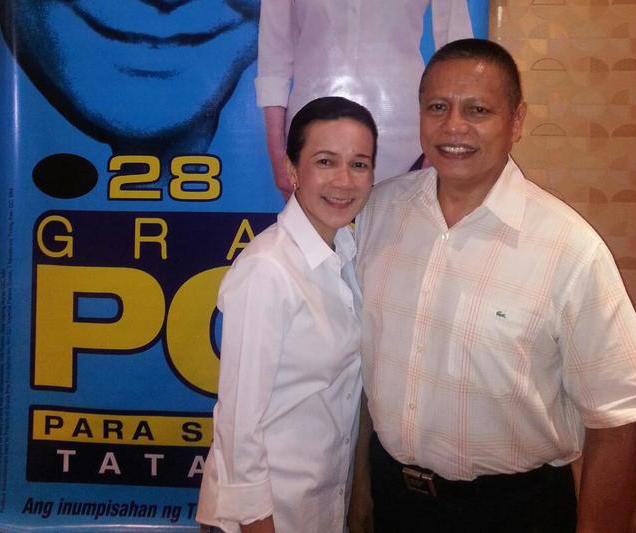 BATANGAS, Philippines – It’s all about trust, discipline, and credibility.

That’s what presidential bet Grace Poe said on Tuesday, March 29, as she defended her choice of Ariel Querubin as her “anti-crime czar.”

No less than President Benigno Aquino III questioned Poe’s pronouncement that she would appoint the retired Marine colonel to fight crime and drugs if she wins as president. (READ: Poe eyes ex-coup plotter as her anti-crime czar)

Aquino doubted Poe’s capability and readiness to lead the nation for supposedly confusing the roles of the military and police.

The commander-in-chief pointed out that cops are tasked with chasing after and arresting criminals while soldiers are taught to crush external threats.

Poe stands by her choice, however, citing Querubin’s experience in the military, which eventually garnered him the Medal of Valor award – the highest combat award given to a soldier.

(No, because when it comes to crimes, a retired military can lead in the fight against it. And also, he received a medal of valor, right? Not only that, you need someone whose background is trustworthy. Tactically, he is good. His colleagues respect him.)

Poe said she trusts Querubin as she has known him for years. The latter protested the results of the 2004 presidential elections, claiming then-president Gloria Macapagal-Arroyo cheated the late action star Fernando Poe Jr (FPJ).

(I’ve known Querubin for a long time now. We need a disciplined police or a disciplined individual who can run an agency. He has the credibility. In fact, he had been shot many times but because he saved other soldiers, he did not back down, he ended the operation. He saved a lot.)

Querubin was imprisoned from 2006 to 2010 for alleged involvement in attempts to unseat Arroyo in the aftermath of the “Hello, Garci” scandal that exposed her phone calls to an election commissioner during the canvassing of the 2004 election votes.

For the senator, Querubin had valid “reasons” for staging a mutiny against her father’s rival.

(Yes he is a coup plotter but look at who he disobeyed? They had reasons then because of questionable results of the 2004 election. For me, integrity is important even if he disobeyed the president becaus he believed the leadership then was unjust.)

(I think there was a reason. Now, if I would be that kind of president, I would not be surprised if somebody would do that to me. But we saw that if the president is good, the country will be the one to protect him/her.)

Querubin was also implicated in the December 1989 coup that almost brought down the government of then President Corazon Aquino.

Now, he is a security consultant for business conglomerate San Miguel Corporation, the same company helping Poe’s campaign. SMC is headed by Eduardo “Danding” Cojuangco Jr, one of the senator’s backers.

Asked if SMC has a role in her choice, Poe denied this, saying, “I think nagkataon sapagkat marami rin syang ibang tinutulungan at lalong lalo na mag-iingat ako kumuha ng isang taong di ko alam ang background.” (I think it was just a coincidence because he is also helping others and I will be more careful in choosing a person whose background I do not know.) – Rappler.com