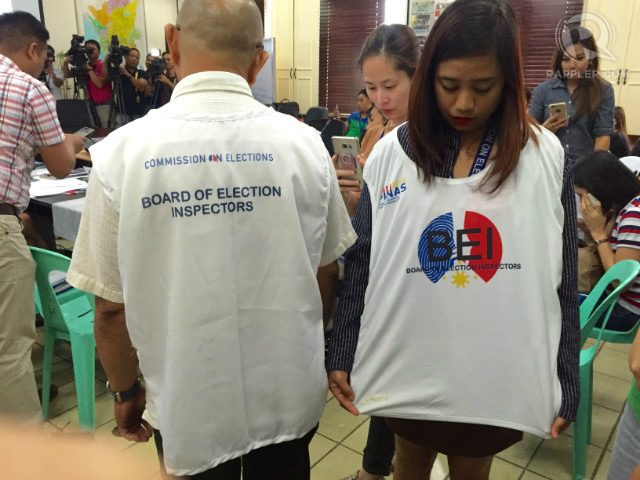 Facebook Twitter Copy URL
Copied
Senator Aquilino Pimentel III criticizes the Comelec for its plan to buy uniforms for election inspectors: 'What is the point?'

MANILA, Philippines – The chairman of the Senate electoral reforms committee, Senator Aquilino Pimentel III, criticized the Philippine poll body’s plan to buy uniforms worth at least P20 million* ($434,600) for teachers serving in the May 9 elections.

Pimentel told Rappler on Tuesday, March 29, “Why are we throwing away P20 to P22 million for an unnecessary expense?”

He added: “Why not just save the amount for some contingencies that might come up later, or even add it to the cash allowances of those who serve in the elections?”

The Comelec earlier said it is set to spend P20.81 million ($452,535) to buy these uniforms for teachers serving as board of election inspectors (BEIs).

On Wednesday, March 30, the poll body said it is buying thousands of additional uniforms, in the form of “bib vests.”

“Divert money instead to additional per diem of BEIs,” Lente said Sunday, March 27.

Pimentel: ‘What is the point?’

Jimenez said the election day uniforms, which look like bibs or aprons, can uplift the “dignity” of election inspectors.

Pimentel, however, said teachers “may not even be comfortable” wearing uniforms.

The senator explained: “I do not feel any clamor or request from the BEI members that they need uniforms. This will be the very first time, as far as I can remember, that we will have an election where the persons running our precincts are in uniform.”

Pimentel said, “So what is the point?”

“If they will be allowed to dress casually in accordance with their preference, then they are able to dress more comfortably,” he added.

Pimentel said, “I hope that they come to their senses even before the next hearing.” – Rappler.com