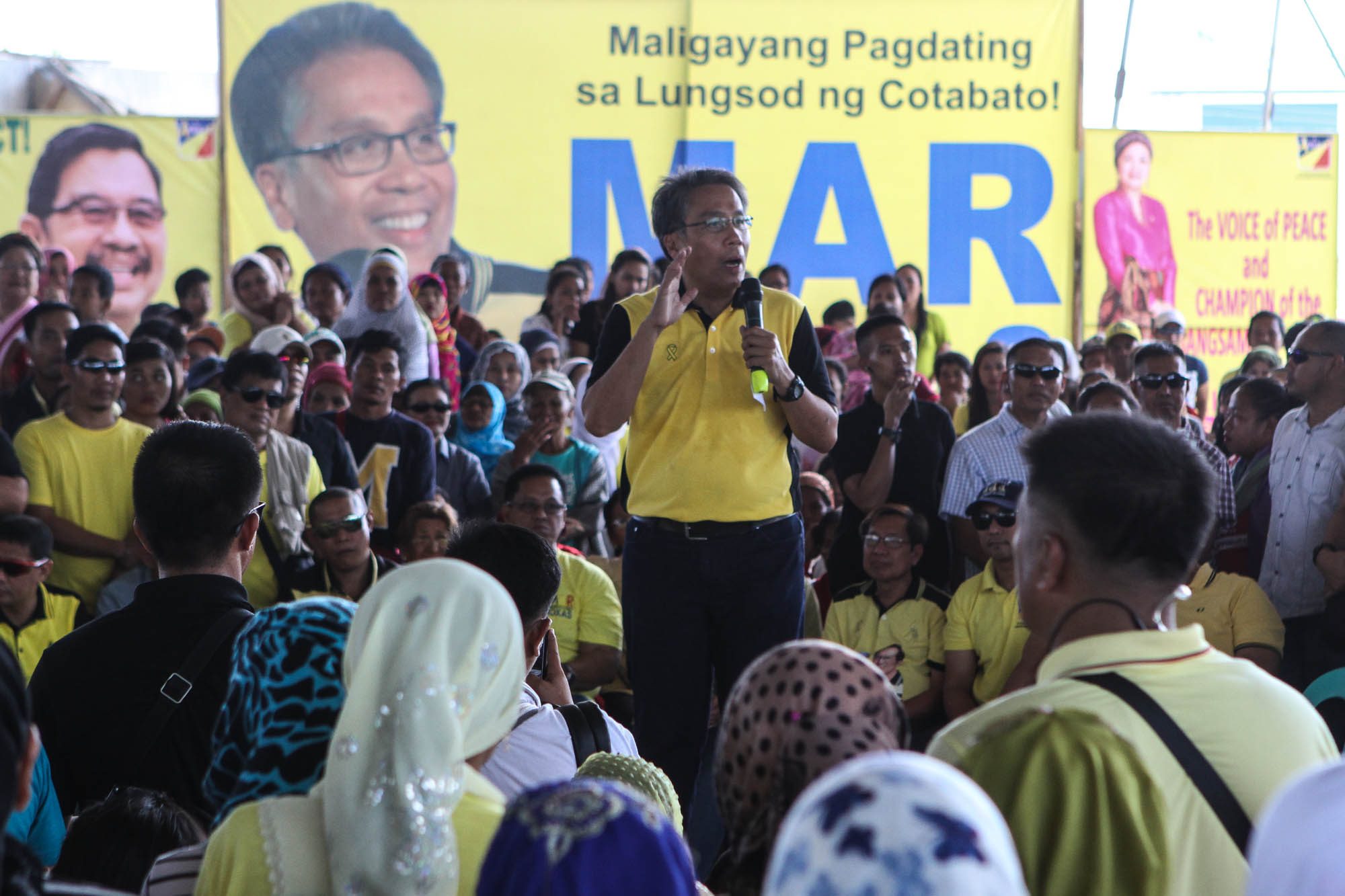 Facebook Twitter Copy URL
Copied
'I did not realize that it created quite a stir. It was not intended. Maybe the correct adjective would have been MNLF,' says the administration presidential bet

COTABATO CITY, Philippines – In a city that’s been witness to decades of war and conflict, Liberal Party (LP) standard-bearer Manuel Roxas II was asked a question that was both professional and personal: What exactly did he mean when he uttered the words “Muslim na mananakop” during a presidential debate in Cebu City?

During a forum with the organization Friends of Peace on Thursday, March 31, Roxas was asked to explain “how it happened” especially because “it affects the religion [and] when you say Muslims, the [entirety of] Muslims are effected.”

“May specific group ba na pinapatamaan (Were you referring to a specific group)?” Roxas was asked during a forum with Friends of Peace, composed of religious groups, the academe, and civil society organizations. (IN PHOTOS: Roxas campaigns in Cotabato, visits MILF’s Camp Darapanan)

Cotabato Archbishop Orlando Cardinal Quevedo, convenor of the organization, also served as moderator of the forum, the first in a series they’ve planned with other presidential candidates.

“I did not realize that it created quite a stir. It was not intended, it was simply used as an adjective. Maybe the correct adjective would have been MNLF… rogue MNLF mananakop, di ba (rough MNLF invaders)?” Roxas said.

Roxas had said the line during the recent presidential debate in Cebu City after Senator Grace Poe insinuated that President Benigno Aquino III did not trust him. (READ: Poe to Roxas: Isn’t Mamasapano proof Aquino doesn’t trust you?)

Roxas went on to speak in length about the bloody siege before adding: “I regret that maybe it was the wrong use of words as a description but certainly, there was no slight intended to the entire religion or the entire Muslim community.” (READ: Zambo crisis: The fog of war)

The administration bet, who was interior secretary during the siege, explained that when the assault on Zamboanga began, government forces did not know who exactly they were up against.

“Maybe I was using the terminology that was being used in the early days. Remember that we were there 21 days, it was only much much much later on after the investigation, after the interviews with all of the captured that it became known that they were rogue MNLF,” he explained.

But Roxas appeared slightly slighted – or at least surprised – when he was asked whether there was any dispute that the armed groups were trying to take over Zamboanga City. (Read more about what critics are saying about Roxas in Heir to the Kingdom)

“Is there a dispute that they were trying to take over Zamboanga City?

One member of the organization cited claims that theirs was merely a “peaceful rally.”

“How do you account for mortar, gun fire, grenades?” said the LP bet, who stayed in Zamboanga during the entire siege.

Hundreds of people – including civilians – died during almost month-long siege of the city.

The government has been criticized for its supposed mishandling of the crisis. – Rappler.com