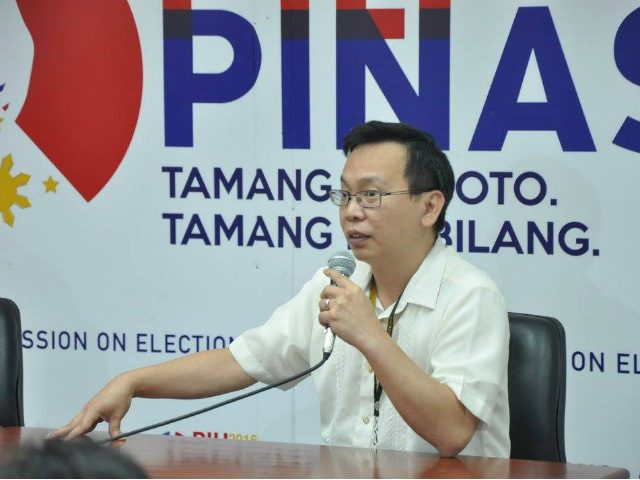 Facebook Twitter Copy URL
Copied
For the first time, Comelec Commissioner Christian Lim explains the changes in the voting process after the SC ordered the printing of voting receipts

MANILA, Philippines – What if the voting receipt doesn’t reflect a voter’s actual choices on election day?

Yes, a voter can air his objections. But no, the Board of Election Inspectors (BEI) cannot resolve his protest on the spot.

Lim, the Comelec’s steering committee head for the 2016 elections, said the chairman of the Board of Election Inspectors (BEI) can only “note” objections for future election protests.

“Hanggang doon na lang. Ino-note sa minutes na he’s objecting sa receipt (That will be it. They will note in the minutes that he’s objecting to the receipt),” Lim said.

Election officials, after all, have repeatedly explained that complaints by individual voters – with or without receipts – aren’t meant to be resolved on the spot. Instead, election inspectors have consistently been tasked to note these for future election protests.

For the first time, Lim on Friday explained the changes in the voting process after the SC ordered the Comelec to issue voting receipts.

The Comelec is supposed to detail this process in its general instructions for BEIs. The poll body is yet to release this document to the public.

Based on the Comelec’s plans, Lim said that after a voter inserts the ballot in the VCM, the machine will display his or her vote for one second.

This is part of the on-screen verification feature of VCMs.

Weeks before this, the Comelec had a different plan. Back then, the poll body had decided not to print voting receipts and to activate the on-screen verification of VCMs as a compromise.

A VCM was supposed to display a person’s votes for 15 seconds.

The SC, however, later required the Comelec to print voting receipts. With the voting receipts, Lim said, the SC already considers on-screen verification as a redundancy.

This is why the Comelec reduced the on-screen verification of votes to only one second – practically making the function useless for voters.

The Comelec could have turned off this function, but this would require the poll body to modify the source code or “master blueprint” of VCMs. It has no more time to do this given that the May 9 elections is only a few weeks away.

Receipt bin ‘away from the machine’

In his interview on Friday, Lim added that after the VCM displays a person’s votes, the machine will then print the voting receipt.

The BEI will have to fold the receipt and cut it at the bottom.

Before handing the receipt to the voter, the BEI will have to apply indelible ink on one of the voter’s fingers.

“Kasi baka pagkuha ng resibo, baka biglang tumakbo ‘yung voter (Because after getting the receipt, the voter might run away),” Lim said.

Lim was apparently referring to the possibility that a voter might vote again or take the receipt out of the election precinct. The Comelec bans both of these.

The Comelec commissioner also said that a voter cannot read the receipt “in front” of the line, thus “holding up the queue.”

He said the receptacle for receipts “is going to be located away from the machine.” This means a voter will have to walk a few steps away from the VCM after he or she gets the voting receipt.

The voter is supposed to place his or her receipt in the receptacle, to be retrieved if there is an election protest. – Rappler.com