Apr 2, 2016 8:20 PM PHT
Facebook Twitter Copy URL
Copied
The vice presidential race remains a close one, with Marcos obtaining a 25% score and both Robredo and Escudero getting 23% – within the survey's ±2% margin of error 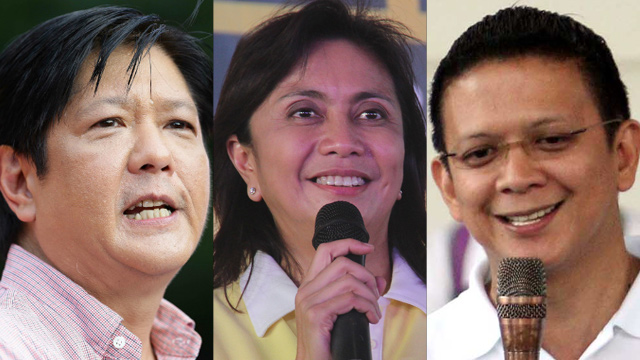 MANILA, Philippines – With 37 days to go before election day, the vice presidential race remains a close fight among 3 candidates who are statistically tied at top spot in the latest Pulso ng Bayan report by Pulse Asia.

But the survey’s ±2% error margin puts the 3 candidates at a statistical tie for 1st place. A copy of the survey results was obtained from Valenzuela Mayor Rex Gatchalian, spokesperson of presidential candidate Grace Poe.

The February Pulso ng Bayan survey had Escudero and Marcos practically tied at first place, with Robredo ranking 3rd with 19%.

The March survey, however, saw Robredo enjoying a surge in her numbers across all regions and socioeconomic classes, except for Class ABC.

The vice presidential race continues to be a tight one among the 3 candidates. An ABS-CBN commissioned survey held from March 15 to 20 showed Escudero and Marcos sharing the top spot with 25% voter preference rating, with Robredo’s 21% score nearly statistically tying with the two leading candidates. 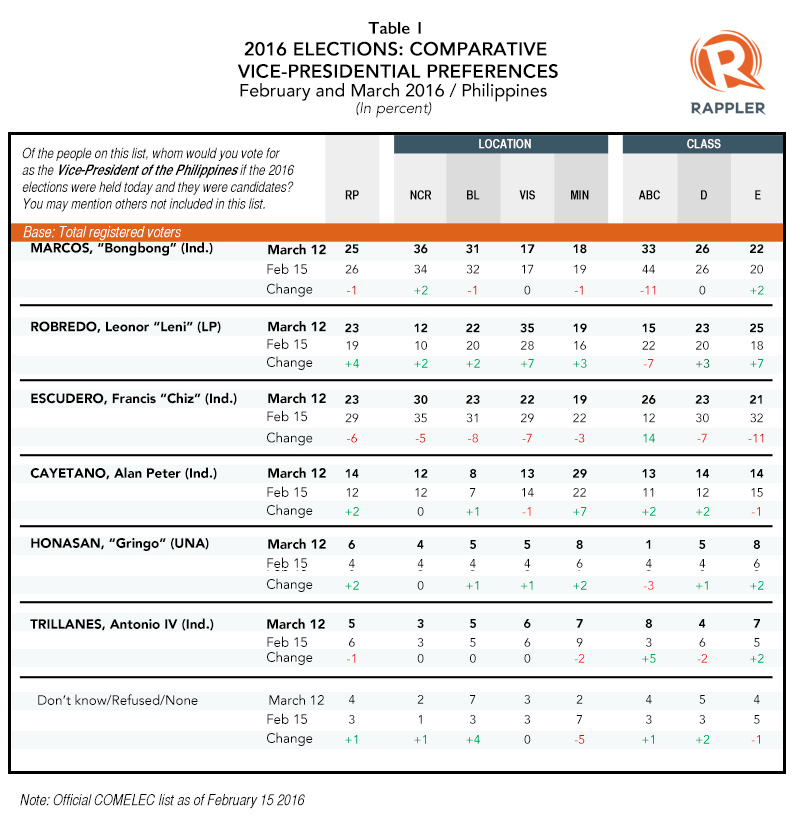 Coming in at third place was Senator Alan Peter Cayetano with 14%, a two-percentage point increase from his February numbers.

He is followed by opposition candidate Gringo Honasan with 6%, and Senator Antonio Trillanes IV with 5%.

Meanwhile, 4% of voters remain undecided on their choice for vice president.

Among the vice presidential candidates, Marcos is the top choice in both the National Capital Region (NCR) and Balance Luzon, obtaining ratings of 36% and 31% respectively.

In the Visayas, Robredo is the favored candidate with 35%, a 7-percentage point surge over her 28% rating in the February survey.

Cayetano, meanwhile, remains the strongest candidate among Mindanao voters with a rating of 29% – a 7-percentage point increase from his February numbers.

Marcos also leads among voters in Class ABC with a 33% score, despite dropping 11-percentage points compared to his 44% rating in the February survey.

He also leads slightly among voters in Class D with 26%, just 3 percentage points ahead of Robredo and Escudero.