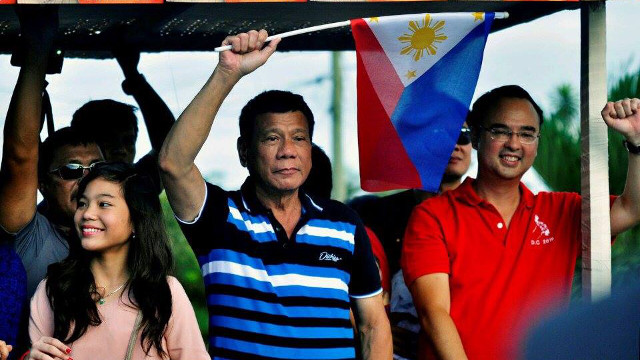 MANILA, Philippines (UPDATED) – Rodrigo Duterte enjoyed a significant rise in support from respondents in the latest The Standard Poll conducted by Laylo Research Strategies. He has a slight lead over Grace Poe, although the two are still statistically tied for the top spot.

The Mindanaoan presidential bet is the choice for president of 30% of respondents in the survey, conducted from March 26 to April 1. The results of the poll were first published on Manila Standard on Tuesday, April 5.

Poe follows with 27%, Liberal Party bet Manuel “Mar” Roxas II with 21%, Vice President Jejomar Binay with 18%, and Senator Miriam Defensor-Santiago with 2%. The survey has a national error margin of +/- 1.8%.

The poll was conducted a week after the second presidential debate held in Cebu on March 20.

It covered 3,000 respondents, all of whom are registered voters. The poll was conducted in 79 provinces and 40 highly-urbanized cities, including all cities in Metro Manila.

Support for Duterte rose by 6 percentage points from the last Laylo survey conducted from February 24 to March 1 (from 24% to 30%). 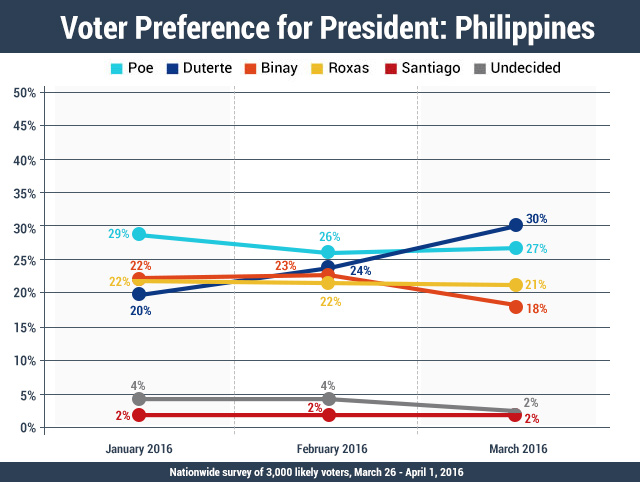 Poe improved slightly, increasing by one percentage point from 26% to 27%. Binay suffered the biggest drop, from 23% last month to 18% – a difference of 5 percentage points. This allowed Roxas to clinch 3rd place, although support for him dipped too, from 22% to 21%.

Duterte’s spokesperson Peter Laviña said the result of the latest Laylo poll “mirrors the true picture on the ground.”

“Duterte is no doubt gaining momentum that will carry to victory the people’s clamor for genuine change,” he continued.

Leoncio Evasco, Duterte’s campaign manager, said the survey results show that “slowly, we are are getting closer to our goal of ensuring victory.”

“That he is the presidential candidate to beat is becoming clearer and clearer for his rivals now,” he added. – Pia Ranada/Rappler.com