Facebook Twitter Copy URL
Copied
After drawing flak over P26.55-million ‘bib vest’ uniforms, the Comelec defends its new proposal to hold the canvassing of votes in the Manila Hotel

MANILA, Philippines – The Commission on Elections (Comelec) defended its plan to hold the national canvassing of votes in the Manila Hotel, a 5-star facility, instead of the government-owned Philippine International Convention Center (PICC).

“If people think that it’s all about frivolity, then perhaps it would be enlightening if they could inquire deeper into the thing that they’re commenting on, rather than just engaging in kneejerk reactions,” Comelec spokesman James Jimenez said Wednesday, April 6.

He explained, for one, that canvassing votes in the Manila Hotel can “actually come out cheaper” compared to doing this in the PICC.

He also said the proposed canvassing venue is not the main hotel building, but a tent owned by the Manila Hotel. The tent is reportedly located near the hotel’s main building.

He could not provide details, such as the cost of renting the venue, as of posting time.

This comes after Rappler reported that the poll body is considering to canvass votes in the Manila Hotel as part of the May 9 elections.

Comelec Commissioner Rowena Guanzon said this proposal is for the canvassing of votes for the Philippines’ next senators and party-list representatives.

The canvassing of votes for the next president and vice president, on the other hand, is traditionally done in Congress.

During his interview with reporters on Wednesday, Jimenez also addressed concerns that it might be harder to secure the Manila Hotel, a private facility, compared to government buildings like the PICC. 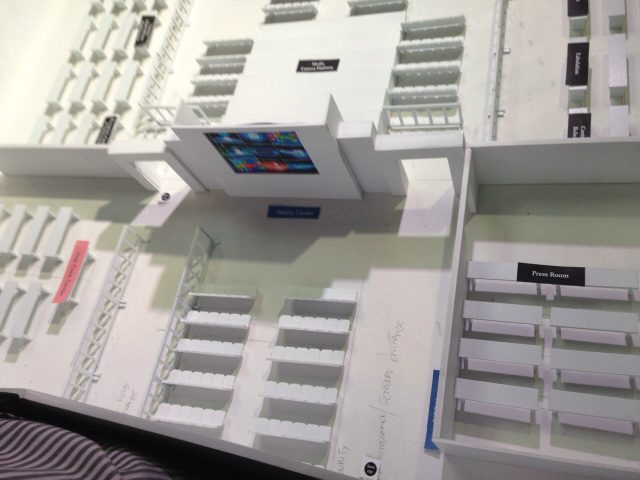 Jimenez stressed that the proposed canvassing venue is a tent apart from the main building.

“The only access to the public for it would be through a gated entrance, and then a driveway which is easily secured, because that’s just the one entrance,” he said.

He also said the Comelec isn’t required to hold the canvassing in a government-owned facility.

What’s important, he said, is that the Comelec will “have control over the space, and we can put in our own security people.”

He said public feedback so far involves “preconceived notions about how secure certain types of building are.”

“I would even hazard to say that a lot of the people who are complaining along these lines, they probably don’t even know that Manila Hotel has a tent. They’re probably thinking that this is gonna be held in the hotel itself,” he said.

The Comelec has been heavily criticized on social media for this proposal, but Jimenez made an appeal not to be “too eager to suddenly lash out” on the idea if one has incomplete details.

He then referred to the Comelec’s decision on Tuesday, April 5, to junk its controversial plan to buy “bib vest” uniforms worth P26.55 million ($574,300) for teachers serving as election inspectors.

The Comelec made this decision after the proposal drew flak from netizens and even from politicians like leading presidential candidate Senator Grace Poe. (READ: Senator hits poll uniforms: ‘Why throw away P20M?’)

Referring to the decision to scrap the bib vests, Jimenez said: “The Comelec yesterday proved that it is not deaf to public opinion, and I think that is true in everything that the Comelec does nowadays. So I would ask the public to take assurance from that, that everything we do, we do with due deliberation, after consultation and with the end in mind of really benefiting the Filipino electorate.”

The Comelec is considering this proposal under the leadership of elections chief Andres Bautista, who used to run Shangri-La hotels and resorts in the Philippines.

Bautista has consistently stressed the need to improve the Comelec’s image, but this sometimes comes with a heavy price tag.

For instance, when the Comelec accepted certificates of candidacy (COCs) of national candidates in October 2015, Bautista admitted that the Comelec spent “a few hundred thousand pesos.”

Referring to the taxpayers’ money spent by the Comelec for this ministerial duty, Bautista said in October 2015, “Hindi naman gano’n kalaki (It’s not that big).” – Rappler.com