Apr 7, 2016 8:00 AM PHT
Rappler.com
Facebook Twitter Copy URL
Copied
Senator Cynthia Villar earlier said that members of the Nacionalista Party are free to choose who will they support as VP

Aguilar is the brother of Nacionalista Party head Senator Cynthia Villar; Mark is the senator’s son.

Marcos is one of the 3 NP members who are running for vice president with different standard-bearers. Cynthia Villar earlier said they would equally support Marcos and senators Alan Peter Cayetano and Antonio Trillanes IV.

Is the endorsement of Mayor Aguilar and congressman Villar an indication of the NP head’s support as well? 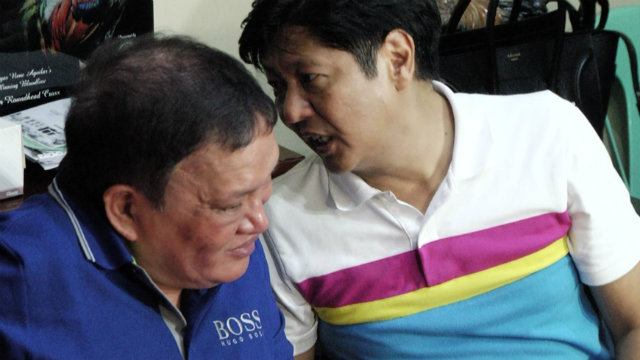 MARK VILLAR, LAS PIÑAS REPRESENTATIVE: Many have abandoned us but Senator Marcos did not.

Aguilar is Senator Cynthia Villar’s brother while Congressman Villar is her son.

Senator Villar is the leader of the Nacionalista Party, the 3rd biggest party in the Philippines.

VERGEL AGUILAR, LAS PIÑAS MAYOR: I vow that I will not only vote for Bongbong Marcos but also ask others to vote for him. All my friends will vote for him.

Marcos, Alan Peter Cayetano, and Sonny Trillanes are of the NP. All of them are running for vice president.

Senator Villar earlier said that members of the NP are free to choose among the three candidates who will they support.

Although there was no direct endorsement from the NP head, will her son and brother’s support help keep Marcos on top of the surveys?

Only one month is left before the elections and the race between vice presidential candidates is still tight. That’s why every promised support is very important to candidates.