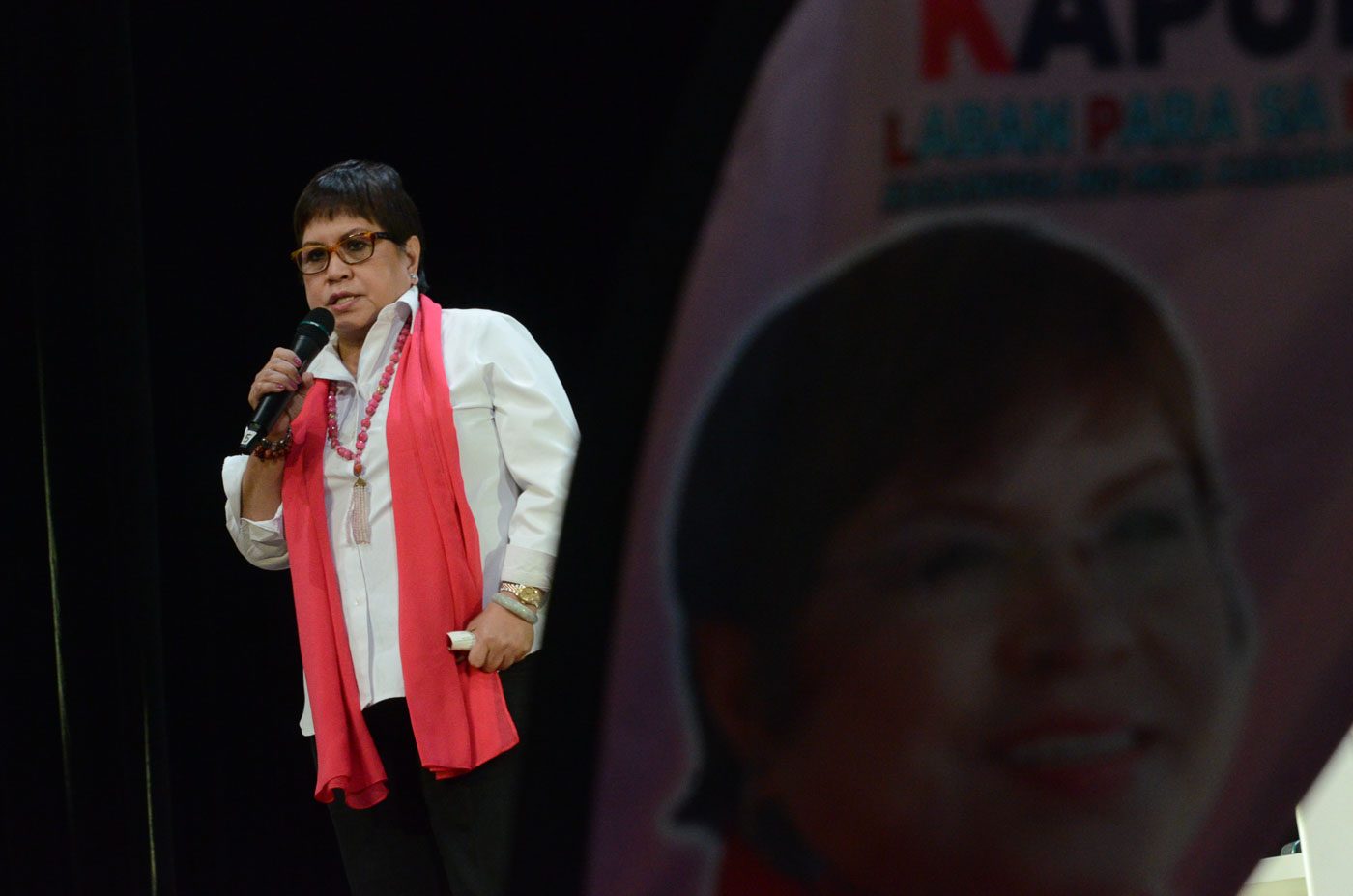 MANILA, Philippines – Lorna Kapunan, a human rights lawyer, is also known for handling high-profile cases of celebrities and well-known personalities, among them Janet Napoles, the alleged mastermind of the pork barrel scam.

While she admits that she has no track record in legislation, she is widely-known for women’s rights and family cases she has handled.

Running under the party Aksyon Demokratiko, Kapunan is pushing for free college education and affordable health care and basic services, such as electricity and transportation.

She also supports farmers and plans to review the Comprehensive Agrarian Reform Program. She also wants Overseas Filipino Workers (OFW) to go back to the country. She is against federalism.

If elected, Kapunan said she would do the following in her first 100 days:

As part of Rappler #PHvote’s “The Leader I Want” series, we look at Kapunan’s stand on key issues that the next batch of senators will have to address.

A lawyer for 38 years, Kapunan believes there is a need to fix the justice system to have an honest Philippine government. She specifically pushes for the creation of more courts and salary increase of justices in order “to remove hoodlums in robes.”

In 2013, Kapunan became controversial when she said that there is corruption in the judiciary. The Supreme Court asked Kapunan to explain her allegations on judges who allegedly accept bribes.

In a Rappler Talk interview in November 2015, Kapunan said that she believes increasing the salary of government workers is “a step towards the right direction.” She said that people in the government are tempted to accept bribe because they don’t receive enough pay.

If elected to the Senate, she vows to fight for the oppressed, Kapunan said during Rappler’s “The Leader I Want” forum.

Known as a women’s advocate, Kapunan believes that more women should be elected and appointed in government. But she also believes that, regardless of sexual orientation and gender identity, everyone deserves respect, hence, her support for the anti-discrimination bill and divorce bill. She also said she is pushing for ammendments in the Family Code, to protect men who are also victims of domestic abuse.

On farmers, she said she supports the extension of the country’s agrarian reform program, which ended in June 2014.

On healthcare, Kapunan wants to expand PhilHealth coverage so that patients from low- and middle-income classes will no longer have to worry about their laboratory expenses.

She specifically said she wants to review the K to 12 program, and stressed that it is geared for producing overseas employees instead of generating jobs locally.

She is against labor contractualization and wants to legislate laws that can remove it.

When it comes to disaster management, Kapunan believes coordination between local government units and the national government should be improved. She also said stronger climate change mitigation efforts should involve the private sector.

Kapunan also believes that adequate housing should be integrated in the fight against climate change.

In an ABS-CBN article, she said that “accountability and transparency through freedom of information is crucial in ensuring disaster victims are fully rehabilitated.” She also added that she wants to bring death penalty to all authorities accountable for all deaths from Super Typhoon Yolanda (Haiyan).

In a forum organized by the Ateneo Task Force last March, Kapunan warned that the Chinese want to invade the country for arable lands.

“Kaya pinapasukan tayo ng mga Intsik na ‘yan (That’s why those Chinese are coming in). That’s why they want to take over our country because China has no arable lands,” she said.

If elected senator, Kapunan said she will pass laws that would create business opportunities here so overseas Filipino workers (OFWs) can come home.

Kapunan opposes the proposed Bangsamoro Basic Law, citing unconstitutional provisions. She said the problem in Mindanao is not peace and order but poverty. She said less than 20% of Mindanao’s resources are being used for Mindanao. –Rappler.com

Lorna Kapunan is among the senatorial candidates who will participate in Rappler’s #TheLeaderIWant Senatorial Debates at AMA University and Colleges in Quezon City on Friday, April 8, from 3 pm to 5:30 pm.