Binay slams Duterte: ‘Why so proud of extrajudicial killings?’ 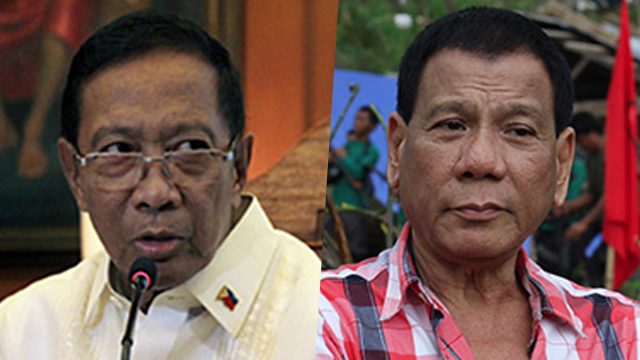 MANILA, Philippines –  Days after he slipped to fourth spot in a survey on presidential candidates, Vice President Jejomar Binay slammed poll front-runner Rodrigo Duterte for boasting that he would “continue extrajudicial killings” if elected president.

Binay echoed the sentiment of his other rival, administration standard-bearer Manuel “Mar” Roxas II, and others that Duterte’s promise to end crime in a matter of months is impossible.

Duterte has gained traction among voters for promising to end crime within 3 to 6 months of his presidency, even if he has failed, so far, to explain how he plans to do this. He has only said that his anti-crime campaign would be “bloody.”

The Vice President called out Duterte for boasting about his eagerness to kill criminals without due process, and then segued into cases of extrajudicial killings in Davao

(Extrajudicial killings are unlawful. It’s gruesome. If you can only see the picture of a 14-year-old boy who was knifed to death, just like his brothers. The court should be the only one to judge.)

He was alluding to Bobby Alia from Davao, who was among the 4 brothers killed in the city between 2001 and 2002 because they were minors in conflict with the law.  (READ: The Bully)

The Philippine Center for Investigative Journalism said little has been done to investigate the murder of the Alia brothers, among the extrajudicial killings plaguing Davao in the past years.

At some point, Duterte seemed to have softened his stance on extrajudicial killings saying “there is no honor in it.”

But the latest statement from his camp on Wednesday quoted him as saying that he was not joking when he said he would kill criminals himself. “Ginawa ko na ‘yan noon, gagawin ko ulit (I’ve done it before, I’ll do it again),” Duterte said. (READ: ‘Am I the death squad? ‘True’)

The Vice President, who used to be a human rights lawyer, said victims of extrajudicial killings are executed based on suspicion, not facts.

(When people spread rumors about you, authorities would believe them and you’d be killed immediately. That’s wrong. We’re not going to have due process if that happens.)

Even before he launched his presidential bid, Binay had personally attacked  Roxas, and later, Senator Grace Poe, but avoided criticizing Duterte himself until Wednesday.

The first time his camp hit Duterte was in March, when UNA spokesperson Mon Ilagan alleged that Duterte failed to keep Davao City graft-free. Two days later at the Cebu presidential debate,  Binay gave up a chance to ask Duterte about the allegation and instead said the mayor  was “qualified” to run for president.

But the winds have changed now that Duterte is surging in election polls. He is tied in second place with Binay in the latest ABS-CBN poll, trailing behind front-runner Poe.

In the recent The Standard survey, Duterte shared the top spot with Poe, while Binay sank to 4th place.

The Vice President is now trying new things in his campaign, visiting sectors he helped when he was Makati mayor, and  when he served as public housing chief and presidential adviser on OFW concerns.