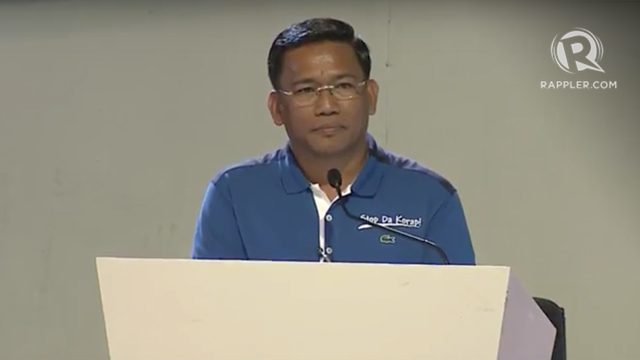 During the first leg of the Rappler senatorial debates at the AMA University in Quezon City, candidate Levi Baligod touted his involvement in the cases against lawmakers tagged in the biggest corruption scandal in recent Philippine history.

But he lamented that while dozens of lawmakers and high-ranking politicians were implicated in documents he submitted to the Department of Justice, only a handful of lawmakers – mostly those not allied with the administration – were prosecuted in the scam.

“What I saw was selective prosecution. In fact, the administration shielded some of its allies or supporters,” Baligod said.

Baligod was the first lawyer of whistleblowers Luy and Merlina Suñas. He was a co-complainant with the National Bureau of Investigation (NBI) in the plunder case against those involved in the scam, where lawmakers allegedly connived with supposed mastermind Janet Lim Napoles to channel discretionary funds into fake non-governmental organizations in exchange for kickbacks.

During the debate, Baligod was asked by senatorial candidate Lorna Kapunan why he did not push for the prosecution of more lawmakers.

Kapunan previously served as Napoles’ lawyer. She said that there were 5 lists of politicians supposedly involved in the scam. In Napoles’ own signed list, which she gave to Justice Secretary Leila de Lima, several administration allies were named, including Budget Secretary Florencio Abad and Agriculture Secretary Proceso Alcala.

“If you knew that the people facing charges were those from the opposition, what did you do to ensure that there is inclusive justice, that there is no selectivity in choosing whom to prosecute?” Kapunan asked in Filipino.

In response, Baligod said that it was the administration, not him, who chose which lawmakers to prosecute. He said it was the reason he quit as Luy’s lawyer.

He said that he submitted evidence to the DOJ which included at least 40 senators.

If elected to the Senate, Baligod said he wants to abolish the pork barrel system because it provides opportunities for corrupt politicians to steal public funds.

To fight corruption, Baligod said he will continue filing cases against corrupt officials. But a long-term solution, he said, was to educate children and teach them to love their country.