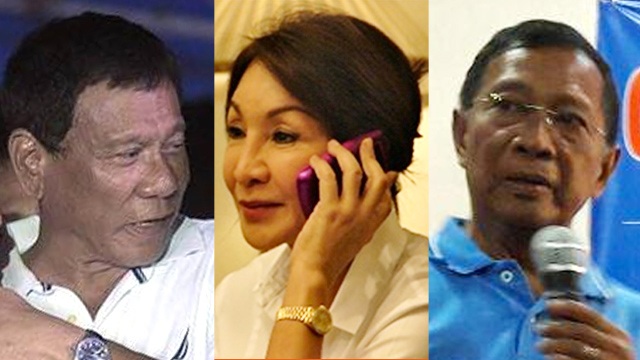 On Monday, April 11, former Cebu governor and 3rd District Representative Gwen Garcia announced she was taking a leave of absence from the United Nationalist Alliance (UNA), her party, to support the candidacy of Davao City Mayor Rodrigo Duterte.

“It was a difficult decision. I have to support the decision of One Cebu, it is the party I founded,” Garcia told Rappler in a phone interview.

On March 21, the Garcia-led One Cebu had dropped their alliance with Binay and UNA. Winston Garcia, the party’s chairman, said that UNA would disregard One Cebu and campaign on their own when they would visit the province.

Even after the alliance was dropped, however, Gwen said she would remain loyal and appeared with Binay at an UNA rally in Toledo City last March 29.

On April 3, One Cebu decided to back Duterte for president, promising to deliver one million votes in the province.

“I have to be one with the family,” she said.

Garcia said that another reason is that “I can no longer ignore the overwhelming clamor the Cebuanos have for change and their support for Duterte.”

She said she spoke to Navotas Representative and UNA Chairman Toby Tiangco when she decided to take a leave from her party. “We [Toby and I] are good friends. I told him I cannot stay silent, I cannot contradict,” she said.

According to Garcia, Tiangco said she was welcome to return to the party any time.

Cebu is the country’s most vote-rich province with 2.7 million votes. – Rappler.com