MANILA, Philippines – The Philippines incurs billions in productivity losses due to traffic, and the situation in the capital region may just get worse if the government fails to arrest the worsening traffic jams that paralyze Metro Manila every day.

It’s a major concern not only for Metro Manila residents, but for potential investors looking to do business in an economy that was among the fastest-growing in Asia in 2015.

The next leader of the Philippines is faced with the task of untangling the traffic chaos, easing the commuting burden for residents, and enticing investors. But the transportation problem isn’t just isolated to Metro Manila: to spur development in rural areas, transportation facilities and infrastructure must be set up as well.

With the national elections just weeks away, what plans and promises have presidential candidates laid out? Revamp the Metro Rail Transit (MRT3). The Vice President has promised to redesign and re-engineer the glitch-ridden train line – a frequent headache for metro commuters – within the first 100 days of his presidency.

Expand the railway system. Binay has also promised to revive the government-run train line, the Philippine National Railways (PNR). Once spanning over 1,000 kilometers, Southeast Asia’s oldest rail system has since been neglected and has incurred losses. Binay plans to revive the “Bicol Express” line and restructure the PNR to isolate its financial problems.

He also plans to push through with the construction of a subway along the major thoroughfare EDSA.

Split up the Department of Transportation and Communication (DOTC). Binay said the DOTC has too many attached agencies, and that it should be broken up to better focus on traffic and transportation issues.

Monitor and supervise coordination among agencies. If elected president, Binay said he would be more “hands on” in fixing the traffic problem, acting as supervisor of the agencies to ensure that they meet their plans and targets.

Improve airports, build new ones. Binay vowed to improve existing airports and ensure they have running water. He also promised to build new ones in strategic areas to encourage economic development.

He promised to oversee the completion of the Laguindingan Airport and expand the highway from Cagayan de Oro to Iligan City in Northern Mindanao. To ease air traffic in Manila, Binay is also pushing for the construction of an airport in Cavite and the development of the Clark International Airport in Pampanga. Build, improve airports and seaports. The Davao City mayor believes that the Ninoy Aquino International Airport (NAIA) in Pasay City can no longer handle the volume of passengers. Instead, the Clark airport should be used as an alternative airport, with a fast train to ferry passengers to and from Manila.

Duterte has also promised to have an airport built in extreme Northern Luzon.

He also proposed transferring seaports further south in Luzon to avoid having too many trucks clog Metro Manila’s streets. Duterte said that this will also be beneficial to traders.

Add more MRT carriages. To improve mass transit, Duterte said he plans to add 30 or 50 more carriages for the MRT3.

Create new train lines. As an additional option for Metro Manila commuters, Duterte said he also wants to put up a new train line that will run along the Pasig River.

The Davao mayor also said he plans to have 3 major railway lines built: one connecting Manila to Bicol, one from Manila to Batangas, and a rail system in Mindanao. Build more airports. Citing the need to boost tourism and investment, the senator has vowed to construct new airports and rehabilitate existing ones within the first 3 years of her term if elected president.

These include airports in Bohol, Iloilo, and Bacolod City. She has also promised to build a second airport in Negros Occidental, expand Laoag Airport in Ilocos Norte, and build an international airport in Pangasinan. Like the other candidates, she also wants to push for the full use of the existing Clark airport.

Complete infrastructure projects already in the pipeline. Poe promised that she would be able to ease traffic within a year by adding more trains, completing pending train line projects, and ensuring that the train projects are awarded to competent contractors.

Poe earlier called for the sacking of transportation chief Joseph Emilio Abaya for his “incompetence” in addressing the metro’s traffic problems. 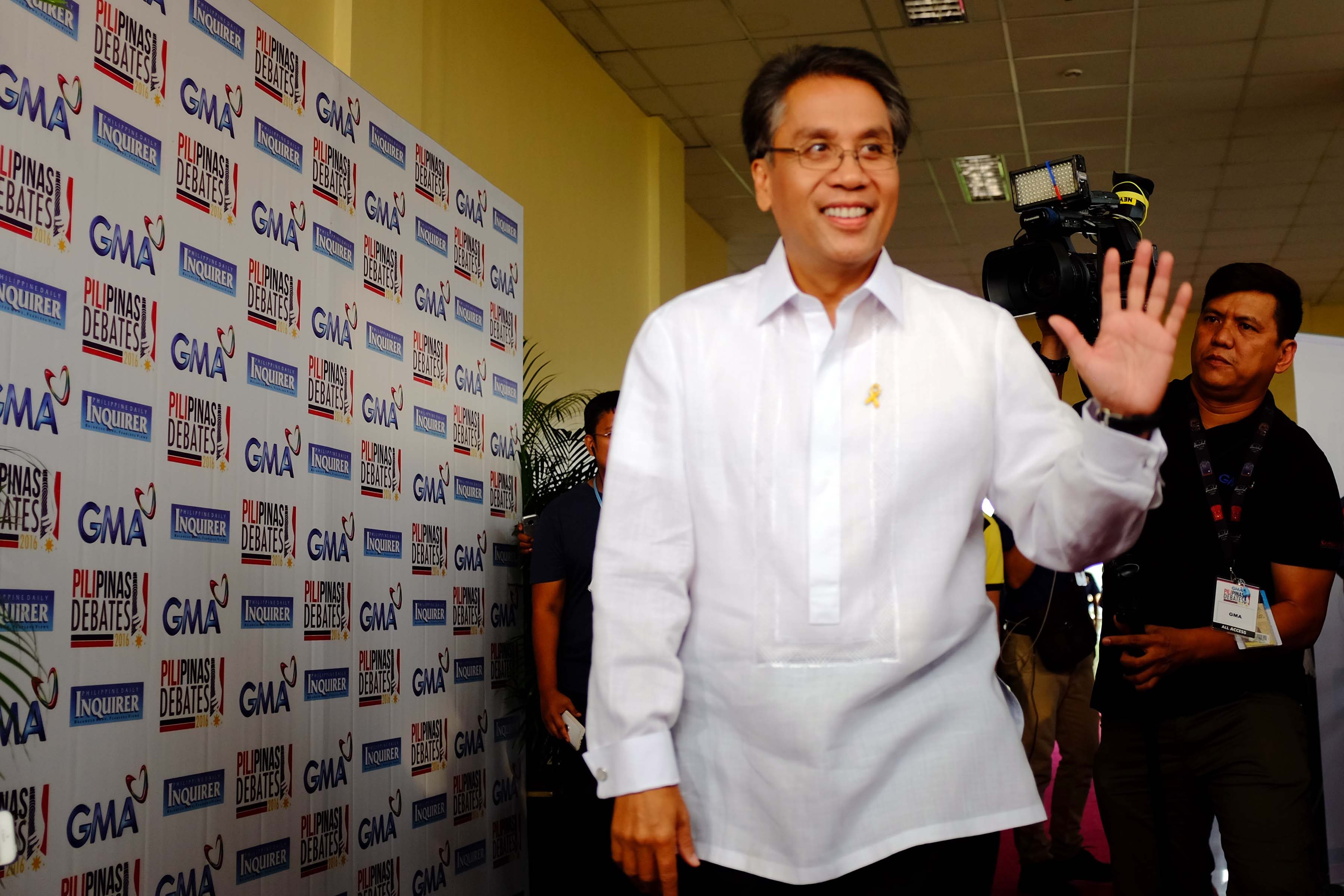 Fix the bus franchise system. Roxas said he plans to terminate the various bus franchises and have only one operator take charge of a specific route. This system, he said, will do away with the current scenario where dozens of buses compete with each other along the same route, adding to traffic and congestion. He also plans to change the “boundary system” and have bus drivers be paid fixed salaries.

Develop Clark Airport as main gateway. Citing the country’s growing population, Roxas said NAIA can no longer accommodate the high volume of passengers. Instead, the bigger, 2,000-hectare Clark airport Pampanga should be developed as the country’s main aviation hub.

Continue ongoing infrastructure projects. As administration standard-bearer, Roxas has consistently vowed to continue and expand the projects started by the Aquino administration. In a visit to Kidapawan City, Roxas also promised the completion of the M’lang airport that would make North Cotabato more accessible to tourists and investors. Establish mixed-use centers. Santiago has vowed to put up mixed-use government centers that will have residential, commercial, and entertainment facilities in the National Capital Region and in each of the 17 regions.

Increase infrastructure budget. Santiago said she plans to set aside at least 5% of the Philippines’ resources to develop infrastructure and spur the country’s development to be at par with its neighbors.