Apr 13, 2016 6:00 PM PHT
Ryan Macasero
Facebook Twitter Copy URL
Copied
Duterte's ex-wife Elizabeth Zimmerman says, 'I stopped my radiation treatment [for the campaign]. But I did it to help my family, my children.' 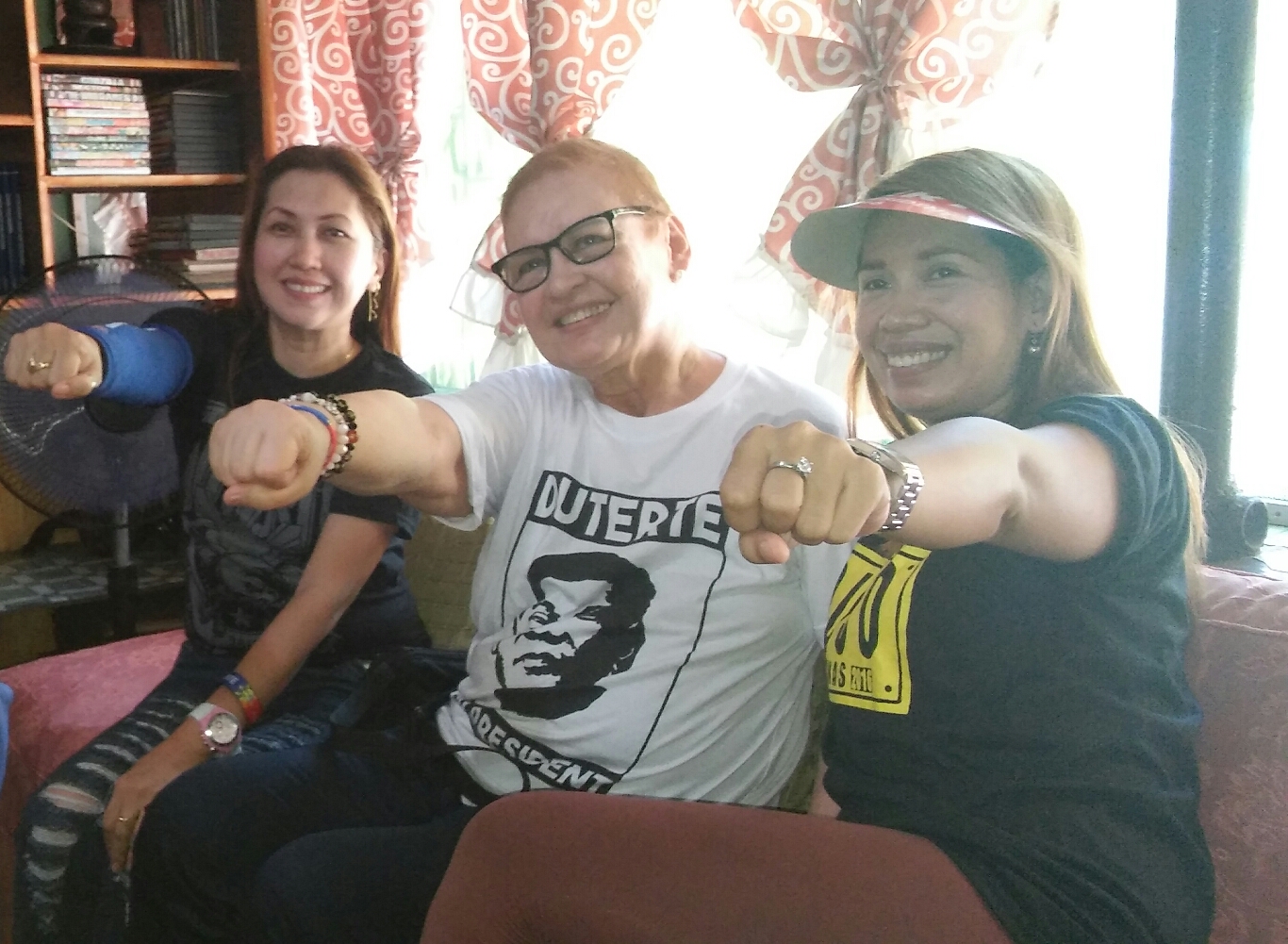 CEBU, Philippines – Elizabeth Zimmerman, the ex-wife of Davao City mayor and presidential candidate Rodrigo Duterte, reacted to recent attacks by other candidates on his controversial human rights record in Davao.

“Di totoo yung sinasabi nila na mamatay mga anak mo. Yung mga namatay, they are not innocent, mga criminals talaga sila. They’ve been going in and out of jail,” she said. (It’s not true when they said that your children will die if you elect Duterte. Those who died are not innocent, they’re really criminals.)

Since April 8, Vice President Jejomar Binay has included tirades against Duterte’s human rights record in his campaign, after the latter grabbed the solo lead in the latest ABS-CBN and Social Weather Stations survey.

Zimmerman was in Cebu on Wednesday, April 13, to campaign for her husband in the province with the Byaheng Du30 bus. It’s a parallel campaign that’s trying to reach areas that Duterte himself cannot reach.

She will take a quick break in Cebu to celebrate her birthday on Thursday, April 14.

“I stopped my radiation treatment [for the campaign]. But I did it to help my family, my children,” she said.

She’s a stage 3 cancer patient, but said that she’s happy to help campaign for her ex-husband.

“We remained good friends despite the annulment of our marriage. Some people are negative about it, I know. But he is still the father of my children, that’s why we remain friends,” said Zimmerman. The two separated because, according to court records, Duterte, said his ex-wife, was a womanizer who had frequent “outbursts of temper”.

In 1998, Elizabeth filed a petition with the Regional Trial Court in Pasig to nullify her marriage. In 2000, the court decided in her favor, ending their 27-year marriage.

In Cebu, Elizabeth was with her daughter “Inday” Sara Duterte and members of the Duterte family. They were originally scheduled to go to Bogo, Cebu, from Catbalogan, Samar, but a logistics error brought them to Cebu City first.

Zimmerman’s roots on her mother’s side are from Tuburan, Cebu. She said she is excited about the reception, especially when she visits Bisaya-speaking areas. “Ila bang kasing-kasing sa pagdawat sa amo anywhere (They receive us with an open heart anywhere). Maski makaluya ang init (even if the heat can be grueling), we’re happy,” she told Rappler in an interview.

By May 5 Zimmerman plans to return to Davao to rest, and then vote. “We’re excited, hopefully that he would top the election. I am praying for him.” (READ: Duterte gains solo lead in ABS-CBN survey)

Sara said of her mother’s participation on the campaign trail: “Suprisingly, siya ang hindi napapagod (she doesn’t get tired).”

In Liloan Sara paid a courtesy call to mayor Duke Frasco and his wife Christina Garcia-Frasco.

Christina is running for mayor of the same town and is the daughter of former governor and 3rd District Representative Gwendolyn “Gwen” Garcia, who recently dropped her endorsement of Binay to support Duterte.

Both mayors expressed support for the candidacy of Rodrigo Duterte. “We’ve got you covered,” Frasco told Sara during the courtesy call.

After a quick break for Zimmerman’s birthday on April 14, the caravan will continue to campaign in Dumaguete and Western Visayas. – Rappler.com