Pacquiao: I can draw crowds for Binay, UNA 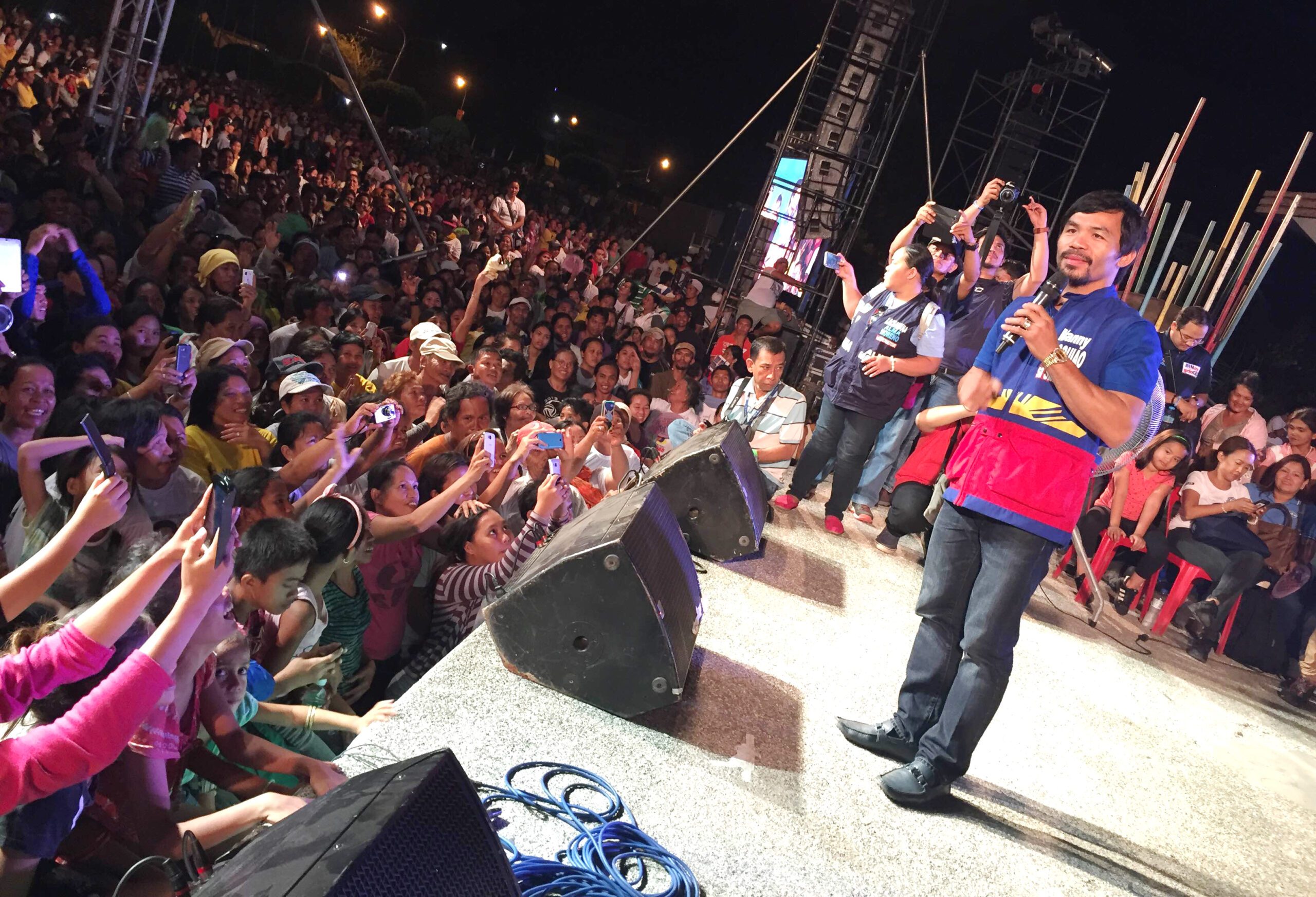 Facebook Twitter Copy URL
Copied
The boxing champ, who is running for senator, says his popularity will draw people to Binay's rallies, thus make them listen to the Vice President's platform

SARANGANI, Philippines – Sarangani Representative Manny Pacquiao said his presence in the remaining sorties of the  United Nationalist Alliance (UNA) will likely attract bigger crowds in the last 3 weeks of the campaign perood.

Pacquiao, who is running for senator, organized two rallies for his standard-bearer Vice President Jejomar Binay on Tuesday, April 19 – one in Alabel town in Sarangani, and another in General Santos City, South Cotabato.

While he represents Sarangani in Congress, the boxing champ traces his roots to General Santos, where he failed in his early congressional bid before venturing into the neighboring province of Sarangani.

He said that his unanimous victory against boxer Timothy Bradley on April 9 may work in UNA’s favor.

(Maybe that would help because, first – not that I’m bragging – many people would go to the rallies because not all Filipinos have seen me.)

This is the second time Pacquiao joined UNA on the campaign trail, the first being the party’s proclamation rally in Mandaluyong City on February 9.

While the boxing icon spent most of the campaign period training for his fight against Bradley, he is the only one among the 6 UNA-exclusive senatorial bets to make it in the Magic 12.

Pacquiao previously said he would retire from boxing after his fight against Bradley. But after securing a crowd-pleasing victory against his opponent, Pacquiao said his decision is now “50-50.”

Binay ‘feels heart of the poor’ Pacquiao decided to stick with Binay for the 2016 elections even after receiving an offer from the Liberal Party. He is also friends with Davao City Mayor Rodrigo Duterte, who is now topping election surveys.

The UNA senatorial bet reiterated his endorsement of Binay.

(Even if I have received millions or even billions in my life, my experience of poverty will never leave my heart. I feel every cry that the poor make because that’s where I came from.)

(Whatever he says is final. We have one party – UNA. We have one advocacy: to lift our countrymen out of poverty.) The two UNA candidates were careful not to comment directly on the latest controversy being faced by Duterte, who got 58% of Mindanaoans’ approval in the latest ABS-CBN poll.

Duterte is under fire for joking about the rape-slay of Australian lay missionary Jacqueline Hammil. He initially refused to say sorry for his remarks, but his camp later issued an apology statement to reporters.

In the past weeks, Binay included tirades against Duterte in campaign speeches. But he did not mention the tough-talking mayor directly as he faced Sarangani residents on Tuesday.

He merely repeated his previous warning to voters against a Duterte presidency, but without mentioning his rival’s name.

(Think about your choices if it involves a person killing others out of suspicion. Think about whom you’re voting for because you might regret it if that person kills people, including children and siblings.)

(If what happened to those 4 siblings happened to your child, then that’s the time you’ll say, “Oh my god! What a mistake!” You might regret your decision, but your loved one is already dead.)

Binay was referring to the suspected extrajudicial killings of the Alia brothers in Davao City between 2001 and 2002. They were minors in conflict with law allegedly killed by the Davao Death Squad, rumored to have ties with Duterte.