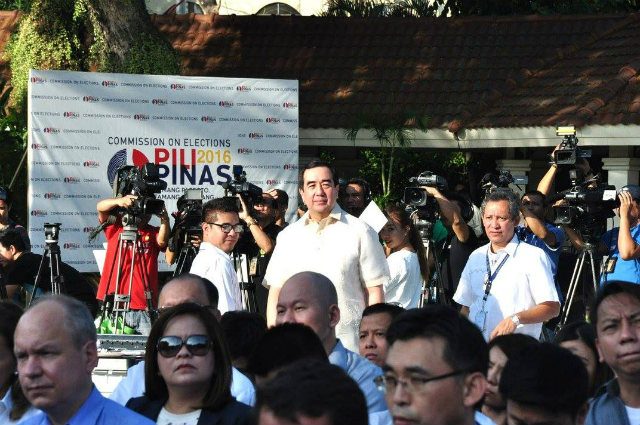 MANILA, Philippines – Commission on Elections (Comelec) Chairman Andres Bautista came under fire on Wednesday, April 20, after a former elections official denounced as “illegal” his proposal to allow voting in malls.

He said that “the transfer of the polling places at this point in time…is certainly in violation of the foregoing provision, especially where there is no need for it because the existing ones are neither destroyed or cannot be used.”

“If you transfer the polling places now, it’s illegal,” Larrazabal said in an interview with reporters in his office in Intramuros, Manila, on Wednesday.

Larrazabal added in his letter: “In the first place, the transfer is being effected ONLY BY THE CHAIRMAN, NOT BY THE COMMISSION (emphasis his). While the Honorable Chairman certainly has authority to perform certain acts for the Commission as its Chief Executive Officer, the authority to transfer polling places is, unfortunately, not one of them as the law specifically requires that the same be done BY THE COMMISSION.”

Referring to mall voting, he said, “Being illegal, any and all votes cast therein will be rendered useless, resulting in the MASSIVE DISENFRANCHISEMENT OF VOTERS (emphasis his).”

Two hours after Larrazabal granted an interview with reporters, Bautista held an unexpected news conference in Comelec to debunk the former commissioner’s claims.

Bautista said the Comelec en banc, or the commission sitting as a whole, passed Minute Resolution 16-0152 dated March 10 that authorized him to enter into memorandums of agreement (MOAs) with participating malls for the May 9 elections. This is “subject to compliance with legal provisions.”

He said the Comelec en banc also approved the transfer of polling places “to participating malls.”

Because of Minute Resolution 16-0152, he said, he entered into a MOA with Robinsons Malls on Monday, April 18, and was set to ink another MOA with Ayala Malls on Wednesday afternoon.

Bautista added that the Comelec conducted two public consultations on mall voting – one on November 27, 2015, and another on January 4 this year – where former commissioners, election lawyers, persons with disability (PWDs), senior citizens, and other stakeholders “generally supporting the idea of mall voting.”

On top of this, the Social Weather Stations reported that 3 out of 5 respondents “say  mall voting centers will make voting easier for PWDs and senior citizens.”

Explaining the proposed mall voting, Bautista said, “Really, one of the things that differentiates this commission, as distinguished from other commissions, is that we are looking for ways to enhance the voting experience.”

During his news conference on Wednesday, Bautista was also asked why the Comelec is rocking the boat or changing procedures when it is facing bigger problems, such as the Supreme Court (SC) ruling on voting receipts.

The Comelec had warned that issuing voting receipts at the last minute, as ordered by the SC, will derail its preparations. (READ: Why SC denied Comelec appeal vs vote receipts)

(We’re trying to solve that, and in a way we’re not the ones who created this challenge. But that’s okay. But, as I also said, what we’re doing and what we really want is to make the process of voting better and more comfortable.)

He added that mall voting this year “is a pilot project, because we also want to see how we can enhance future elections.”

Larrazabal, however, said the state of election preparations now is “worrisome.”

He cited the need to clarify things like transmission, the configuration of SD memory cards, and the shipping of vote-counting machines.

Referring to mall voting, the former commissioner said: “This is a small thing. But we’re stuck with superficial things that shouldn’t really matter on election day. What matters is, you have to have credible elections.”

Larrazabal said mall voting is among small matters that, “in the big picture,” don’t really make a big impact.

The Comelec on Tuesday, April 19, already failed to tackle two pressing issues in the May 9 elections, one of which might rob people of the right to vote if the poll body runs out of ballots.

Larrazabal, who raised these concerns in a letter to Bautista, criticized the poll body on Tuesday for its supposed lack of urgency in its preparations. – Rappler.com