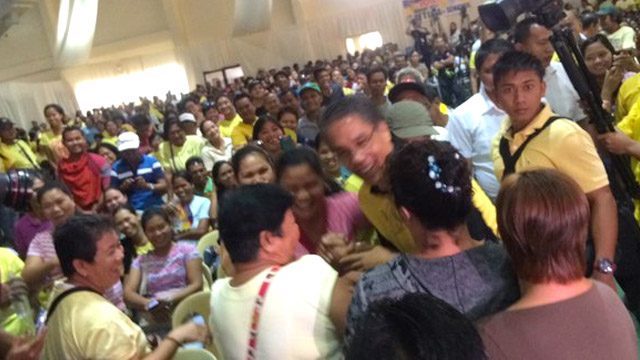 LEYTE, Philippines – On the same day Liberal Party (LP) standard-bearer Manuel Roxas II took his campaign to the province of Leyte, an opposition candidate called an end to the “blame game” over Super Typhoon Yolanda.

“Let’s not inject politics anymore and stop the blame game by moving forward and continue on the rebuilding programs in Yolanda-hit areas. After all, politics simply has no place in the face of tragedy of such magnitude,” senatorial candidate Martin Romualdez said in a press statement on Wednesday, April 20. Romualdez is currently the representative of Leyte’s 1st district.

Leyte is among the provinces worst-hit in 2013 by Yolanda (Haiyan), one of the strongest storms to make landfall in recorded history. In its aftermath, national government was hit for the supposedly slow pace of relief efforts in the provice. Roxas, then interior secretary, was also criticized for supposedly bringing politics in the equation when he met with Tacloban City Mayor Alfred Romualdez, cousin of Representative Romualdez.

The Romualdezes are relatives of former first lady and Ilocos Norte Representative Imelda Marcos, the wife of the late dictator Ferdinand Marcos. The LP’s chairman, President Benigno Aquino III, is the son of Ninoy and Cory Aquino – among the late Marcos’ staunchest political rivals.

The local government and the national government, including President Aquino himself, fought in the immediate aftermath of the storm. Mayor Romualdez, on the 2nd anniversary of Yolanda’s landfall, would later apologize to Aquino for the “harsh words.”

“[Roxas] was there in Tacloban City…when Yolanda struck,” said Romualdez, who is now running for senator under the opposition United Nationalist Alliance (UNA).

Yolanda has been one of the points against Roxas. Critics insist Roxas did not do enough while supporters insist national government was not amiss in giving help.

“[Roxas] did his honest best and risked his life to warn the people, but he and Sec. Gazmin were victims too,” said Romualdez.

Speaking during a press conference in Leyte town, Roxas thanked Romualdez for “telling the truth about Yolanda.”

Earlier on Wednesday, while campaigning in Palo City, Leyte, Roxas called on voters not to believe the “lies” his opponents have spread about him and his performance during Yolanda.

The Eastern Visayas region, which Leyte belongs to, is the area where Roxas is the weakest in Visayas. Only 14% of voters surveyed by Laylo Research Strategies, Inc. in March this year said they would vote for the ruling party’s bet. It’s a huge dip from the 25% he got just a month prior.

Is Romualdez’ latest statement “enough” to help his campaign in Leyte? “It is what it is,” Roxas told reporters.