Apr 21, 2016 3:50 PM PHT
Pia Ranada
Facebook Twitter Copy URL
Copied
The presidential bet regales a crowd in Iloilo with a story of how he shot a fellow San Beda law student who picked on him because he was Bisaya 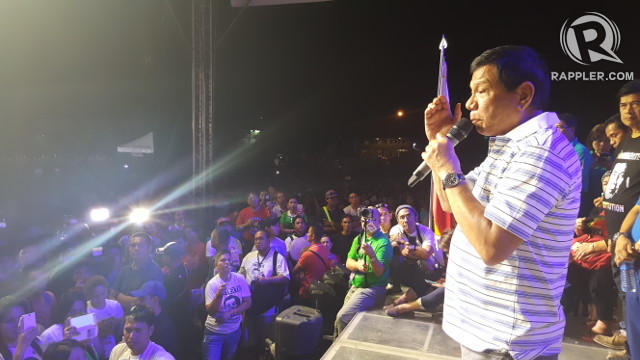 (But the truth is, I’m used to shooting people. When we were about to graduate from San Beda, I shot a person.)

This was how presidential candidate Rodrigo Duterte chose to begin his narration of the time he shot a fellow San Bedan law school student to a crowd of thousands in his Iloilo City rally on Wednesday, April 19. The shooting incident supposedly led to his expulsion, yet he managed to graduate eventually.

He said the student was a bully who would pick on Duterte because he was Bisaya.

(He was verbally-abusive, he would always say, ‘Oy, Bisaya, come here!’ He was the first person I punched…This fool said, ‘Hey, you Bisaya, who make a mess of the world.)

The shooting happened in a school corridor, narrated Duterte.

(We were about to graduate, I was watching him, I said, ‘This guy has a bone to pick with me. Before we went our separate ways, he, a bully would go ‘Hoy, hoy hoy,’ as he entered the corridor. I told him, ‘son of a bitch if that hits me, I will shoot you. Son of a bitch, it hit me on the nose. Ahhh, bang! Expelled.)

The crowd reacted to Duterte’s storytelling with laughter.

After his rally, Duterte told Rappler that the student he shot did not die from the shooting. He refused to elaborate on other details relating to the incident.

Duterte often depicts himself as a tough-talking mayor not afraid to kill or get killed in order to protect law-abiding citizens.

Human rights groups and government officials have condemned his boasts about killing criminals, calling it a tacit endorsement for extra-judicial killings.

Duterte continues to face public outrage for another retelling of a controversial moment in his past – a rape remark about an Australian missionary who was taken hostage in Davao in 1989. – Rappler.com