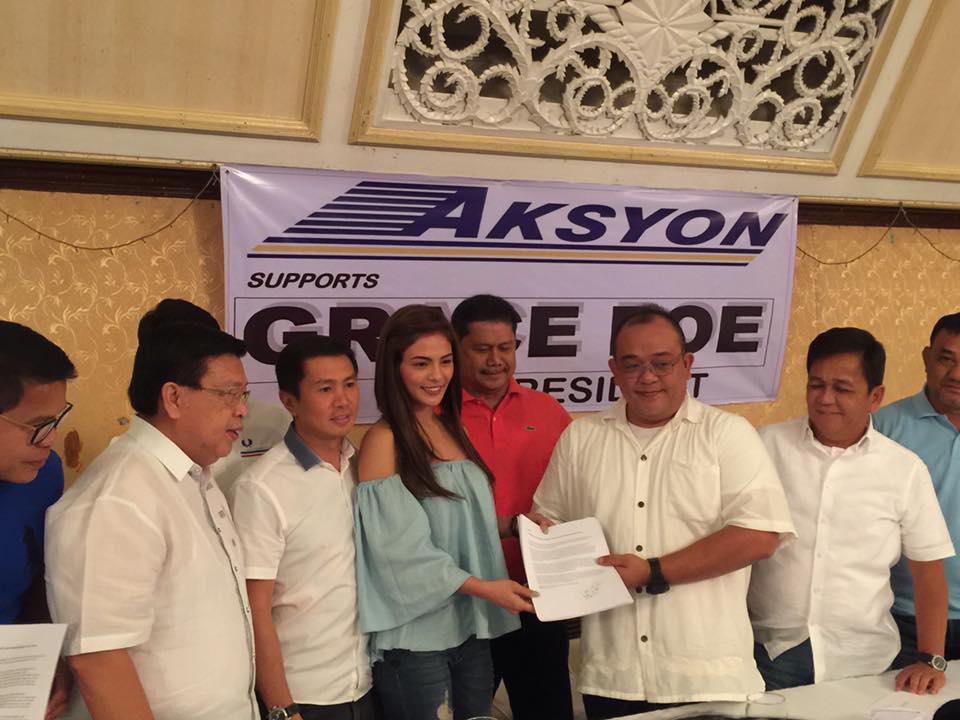 Members of Aksyon Demokratiko hailed Poe’s platform of governance, as they claimed Poe is the “balance” that the country needs.

The party said Poe’s “cohesive” platform prioritizes the “vulnerable and the marginalized,” something that advances the party’s vision.

“Grace Poe represents a healthy and meaningful balance between continuing the gains of this administration and changing what are sorely lacking especially in the areas of infrastructure and poverty alleviation,” said Aksyon president Robbi Pierre Roco, son of the late senator.

Senatorial candidate Lorna Kapunan of the party is part of the senatorial slate of Poe and running mate Escudero.

Incumbent Tarlac City Mayor Ace Manalang, who is also running for governor under PMP, believed in Poe’s promise of “gobyernong may puso (government with heart)”.

“Grace Poe, aside from her intelligence and fear of God, has the character (and decency that will drive her plans and actions) towards inclusive growth, peace, and sustainable progress,” Manalang said.

Aksyon VP for Education Leon Flores III explained that Poe’s platform of governance “clearly shows a bias for the vulnerable and marginalized. Aksyon stands for a creative people in a self-reliant nation. Her cohesive platform clearly advances our vision.”

The senator’s half-sister Lovi Poe accepted the party’s manifesto of support, as Poe was campaigning in Negros Occidental, then in Puerto Princesa City in Palawan, on Thursday.

The late senator, who founded the political party in 1997, ran but lost in the 1998 and 2004 presidential elections. – With a report from Rappler intern Keren Anne Bernadas/Rappler.com