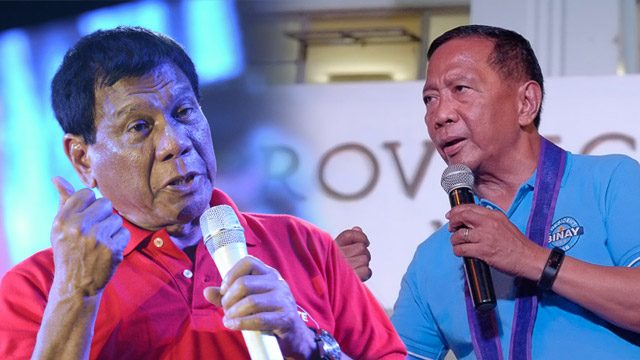 (I am urging Mr Duterte to see a psychiatrist immediately. It seems he is severely being affected by the stress of the campaign.)

“I also urge him to undergo as well a full physical examination. Siya mismo ang nagsabi na siya ay may malubhang sakit, at ayaw natin na may masamang mangyari sa kanya (He himself admitted that he suffers from illnesses and we don’t want anything to happen to him)….I invite Mr Duterte to avail of these healthcare services for free in Makati,” added the Vice President.

Binay was Makati mayor for 21 years.

Current poll front-runner Duterte had received flak for his controversial remarks about the rape of missionary Jacqueline Hammil in 1989.

The tough-talking mayor initially refused to say sorry for his joke, but his camp later issued an apology to reporters. Duterte, however, has repeatedly said that he had nothing to apologize for.

A coalition of women’s rights advocates called “Women Against Duterte” then filed a complaint against the mayor before the Commission of Human Rights.

According to the Philippine Star, Duterte called the complainants as “crazy” because he “just expressed his freedom of speech.” He had also called out the US and Australian ambassadors to the Philippines for criticizing his joke, and said he would be ready to sever ties with two of the Philippines’ closest allies if he elected president.

Binay said he could not understand how a lawyer and former fiscal like Duterte was “apparently confused about the concept of freedom.”

“This could be due to his psychological condition,” the Vice President said.

Binay was referring to the Duterte’s psychological test results. He  had to undergo the test because of the petition for annulment his ex-wife, Elizabeth Zimmerman, filed before a court.

A clinical psychologist found Duterte unable to “remain committed to a person or a relationship.” He also has “gross indifference to others’ needs and feelings, heightened by lack of capacity for remorse and guilt.”

Binay also said Duterte “should assure the people that he is of sound mind and body, especially if he is to become president.”

Duterte previously admitted that he suffered from spinal problems due to a motorcycle accident years ago. He has also spoken of his Barret’s esophagus, a disease involving the tissue in the esophagus.

He admitted having Buerger’s disease as well, a condition that causes constriction of the blood vessels due to nicotine. But Duterte had repeatedly maintained his physical fitness to lead the country.

In his statement, the Vice President also slammed his rival for invoking his freedom of speech in defending his comments against Hamill.

(He said he has freedom to insult women and laugh off raping. What kind of words are those?)

Binay has been hitting Duterte since the latter surged, and eventually topped, presidential surveys during the homestretch of the campaign period. The Vice President used to be the poll front-runner until the Senate began a more than year-long investigation into corruption allegations against him when he was Makati mayor.

Presidential bets Senator Grace Poe and Liberal Party standard-bearer Mar Roxas had hit Duterte as well because of his lofty anti-crime promise – which the mayor had modified – and the rape joke.

On Friday, Binay began his 3-day campaign in Pangasinan, a province of 1.71 million voters considered to be the bailiwick of Poe. – Rappler.com