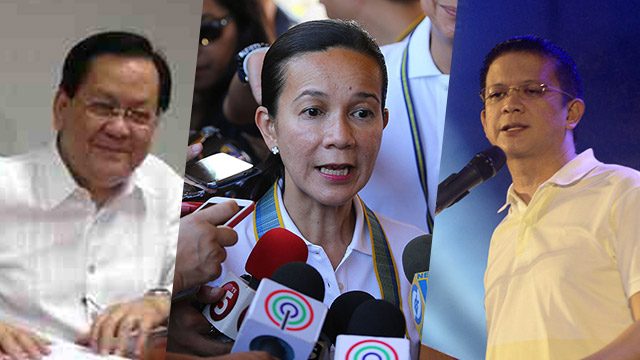 Facebook Twitter Copy URL
Copied
'When a friend asks for some tips, I tend to help' says Senator Serge Osmeña, when asked why he decided to help Grace Poe again

MANILA, Philippines (UPDATED) – With only 3 weeks left before elections, presidential bet Grace Poe has tapped her political mentor, Senator Sergio Osmeña III, to “personally” help her in the homestretch of the campaign.

Osmeña had been out of Poe’s presidential campaign circle as the veteran senator expressed his opposition to Poe’s running mate, Senator Francis Escudero. He earlier advised Poe to run as an independent candidate, without the supposed “extra weight” or baggage of Escudero.

Poe admitted it was she who sought Osmeña’s help. This came at a time when pre-election surveys showed Poe trailing behind closest rival Rodrigo Duterte.

“Senator Serge helps me especially lately and I’m very thankful. He helps me personally. Of course he’s also busy with the candidates but I sought his help,” Poe told reporters in Negros Occidental on Thursday, April 21.

The veteran political strategist, a Rappler source said, now helps in Poe’s “scheduling” of sorties and in crafting her messages – something that Poe has been struggling with. (READ: Poe tweaks strategy after Duterte snatches lead)

Osmeña was also Poe’s political adviser when she ran for senator in 2013.

Asked what made him decide to help the neophyte senator again amid earlier differences, Osmeña said: “When a friend asks for some tips, I tend to help. Nothing mind-blowing. I have my own campaign to worry about.”

Insiders said Poe’s recent political advertisements – ending contractual labor and pushing for women’s rights, a move seen to counter Duterte after his controversial rape joke – were supposedly coordinated with Osmeña, who refused to comment on this.

In 2010, Osmeña handled the first phase of President Benigno Aquino III’s campaign and was among those who crafted Aquino’s anti-corruption message then.

Now, he is also helping Liberal Party’s vice presidential candidate Leni Robredo, whom he earlier said is an “easy sell” and could beat Escudero for vice president.

Differences within the camp?

Two insiders said there are differences in strategies between the handlers of Poe and Escudero. Before January, Escudero’s camp was allegedly calling most of the shots in the campaign, as Poe had no team of her own then.

But when Poe had her own group, they mostly managed her own political affairs and operations, despite having limited background on politics and conducting a national campaign. (READ: Who are running Grace Poe’s campaign?)

Many politicians have since come out endorsing Poe only, adding to the complexity. But Bem Noel, head of the joint Poe-Escudero political affairs and operations group, denied there are conflicts between them and Poe’s core group.

Tandems having their individual teams are an ordinary occurrence in a national campaign, Noel said. As long as there is no junking between the two there is no problem, he added.

“No conflict of strategies. Maybe difference in opinion. At the end of the day we should all stand by mistakes. Part of reality ‘yung may GP lang (that there are those for Grace Poe only.) In fact marami din ang Chiz lang, (In fact there are many who are for Chiz only),” Noel said.

Both Poe and Escudero said the issue is only an intrigue sowed by other political camps.

“We’re fine. There’s always a rumor circulating about other tandems as well. But Senator Chiz and I are together since 2013, campaigning together. We know each other beyond politics. I feel it’s unfounded,” Poe said.

For Escudero, if there’s a tandem that has known each other for a long time, it’s theirs.

He maintained there is no truth to the issues, even as his critic Osmeña is helping Poe now.