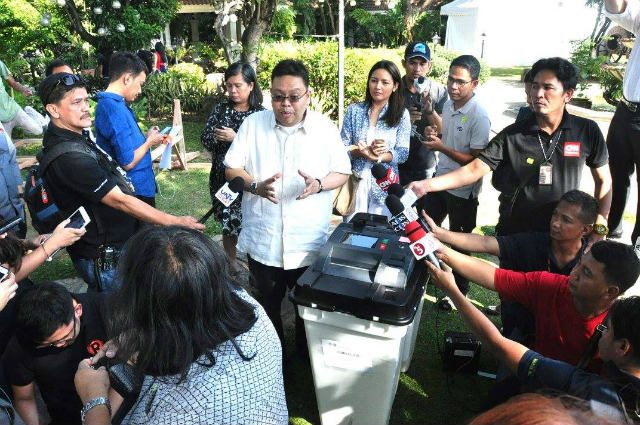 MANILA, Philippines – Leaked data on at least 54.4 million voters cannot be used in cheating, the Commission on Elections (Comelec) said Friday, April 22, to quell fears about the credibility of the May 9 elections.

“That’s one of the things that we’ve always been very sure of,” Comelec spokesman James Jimenez told reporters.

Jimenez explained that the Comelec will use a different set of servers and also a different website for election results. (READ: Comelec: We can protect votes despite hacking)

Is it possible, however, for a flying voter to assume another identity using the data leak?

Jimenez replied, “I don’t see how that is possible.”

For one, he said, the Comelec has already printed a list of voters. The list has the voters’ photos.

(The Comelec will not use a polluted list of voters that comes from some outside source, aside from the one that we made, which we know is clean.)

Earlier on Friday, Kabataan Party-List and other groups staged a protest in front of the Comelec main office, saying that the so-called “Comeleaks” have compromised the May 9 elections.

“The massive data breach has manifold ramifications to all affected voters, yet the most insidious among these is the fact that unscrupulous groups – especially those currently in power – can use the data trove to commit automated electoral fraud of a scale unparalleled since the advent of automated polls,” Kabataan Party-List Representative Terry Ridon said.

While saying that the data leak cannot be used in cheating, Jimenez still admitted on Friday that it has to be accountable for the leaked information.

This is considered the biggest leak of private data in Philippine history. (READ: US aids Philippines in containing data leak) – Rappler.com