Facebook Twitter Copy URL
Copied
(UPDATED) The survey results are released hours before the 5 bets face off in the last of the 3 presidential debates; the controversy over the 'rape comment' is not yet a factor, Pulse Asia says

The commissioned survey, conducted by Pulse Asia Research Incorporated from April 12 to 17 among 4,000 registered voters, showed that Duterte’s voter preference rating was at 34% – or nearly 1 in every 3 voters – a rise of 2 percentage points from the previous survey, conducted April 5 to 10.

The survey results were released hours before the 5 bets face off in the last of the 3 presidential debates sanctioned by the Commission on Elections (Comelec), to be held at the Phinma University of Pangasinan and hosted by ABS-CBN and the Manila Bulletin.

Pulse Asia also said the results does not yet take into account one of the biggest issues of Duterte’s campaign: the highly controversial “rape remark” issue surrounding comments he made about a 1989 hostage-taking incident in Davao.

Survey second placer Senator Grace Poe got a 22% rating, a drop of 3 percentage points from the previous poll, followed by Vice President Jejomar Binay with 19%, and Manuel Roxas II, at 18%, tying for third. Senator Miriam Defensor Santiago remains at the bottom of the survey, at 2%.

The survey said 3% are still undecided on who to vote for, with 3 weeks to go before the May 9 poll.

Duterte’s continued rise in the ABS-CBN poll was buoyed by a surge in support in the National Capital Region (NCR) – an 11-percentage-point rise from the previous survey period.

His support among members of Class ABC also dramatically rose form the previous poll, from 37% to 47% – a 10-percentage-point gain. He is also the top choice among Class D and E voters, with 33% and 34% of those surveyed saying they will choose him. 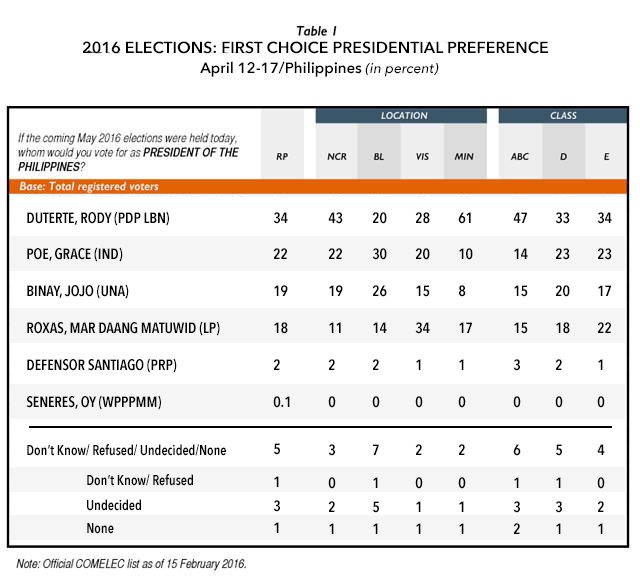 Meanwhile, Poe’s NCR poll number dipped by 10 percentage points, from 32% in the previous survey to 22% in the current one.

Poe continues to be the top presidential choice among respondents in Luzon (30%), while Roxas tops voter preference in the Visayas (34%). Duterte is the leading choice of voters in Mindanao (61%).

If the voters’ primary pick for president drops out of the 5-way race, the survey revealed Poe continues to be the top back-up bet, at 32%, followed by Binay at 17%, and Dutere and Roxas both at 13%. Defensor Santiago got a 6% rating for this metric.

Meanwhile, 17% of those who responded said they don’t have a back-up candidate.

The poll results also showed that if front-runner Duterte drops out of the race, Poe will benefit the most, with 38% of his voters saying they will choose her. At the tail-end of the survey period, Duterte faced one of the biggest issues of his campaign: In a video that went viral, Duterte, in a campaign sortie in Quezon City, recounted the incident, and commented about the beauty of one of the victims, Australian missionary Jacqueline Hamill.

His remarks drew the ire of his fellow presidential hopefuls, women’s and human rights groups, and even the ambassadors of Australia and the United States. The succeeding days saw the presidential bet see-sawing between apology and non-apology for the remark.

The video went viral on the 17th, and the initial stories came out online later that day – but was not on national television and newspapers until the following day, the 18th.

“The stories about the rape joke came on April 18, the day after the last day of this survey, though there were some social media accounts of the video on the 17th already,” Ronald Holmes, president of Pulse Asia Research Inc., told Rappler in a text message.

Also, during the survey period, Pulse Asia noted that there was the back-and-forth between Duterte and Binay over the state of their health.

Other major issues and events during the survey period included the aftermath of the Basilan encounter, which left 18 soldiers dead; the “envelope” issue surrounding the Liberal Party and Roxas; the continued saga over the $81-million money laundering scam; the release on bail of the Kidapawan farmers; and Manny Pacquiao’s third fight with Timothy Bradley Jr in Las Vegas.