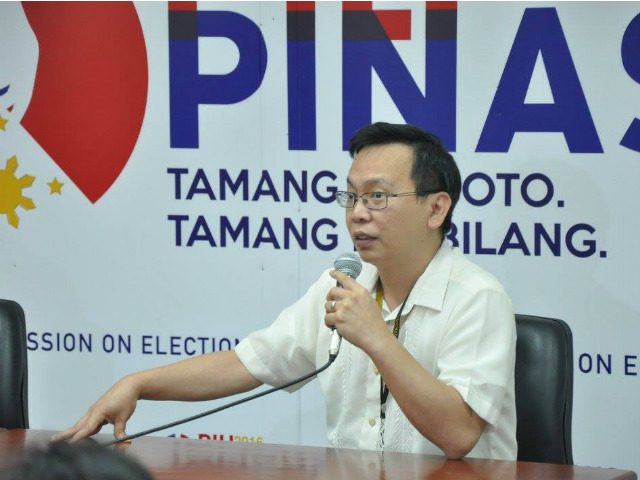 MANILA, Philippines – Exactly two weeks before election day, the Commission on Elections (Comelec) remains undecided on whether to turn a number of malls into polling precincts.

Rappler learned that at least 2 of 7 Comelec members have opposed the mall voting proposal of Comelec Chairman Andres Bautista.

Comelec insiders said Commissioner Christian Lim sent a memo to his colleagues on Friday, April 22, to say he now rejects the proposal.

Lim is the Comelec’s steering committee head for the 2016 elections, which means he is practically running this year’s polls. He is also the most senior Comelec commissioner in terms of years in office.

Other Comelec commissioners have reportedly been asked to submit their comments on the matter, which the poll body will take up in its regular meeting on Tuesday, April 26.

Before this, Comelec Commissioner Rowena Guanzon already rejected the proposal to hold elections in shopping centers.

“It is unlawful,” Guanzon told Rappler.

Guanzon explained that the Omnibus Election Code prohibits the transfer of polling places “within 45 days before a regular election.”

Linked to this provision of the Omnibus Election Code, one argument among Comelec members is that it’s now too late to implement the mall voting proposal.

That it’s too late is the same position taken by former Comelec Commissioner Gregorio Larrazabal. In a strongly worded letter addressed to the Comelec, Larrazabal said “the transfer of the polling places at this point in time…is certainly in violation” of Section 153 of the Omnibus Election Code. (READ: Comelec chair under fire for ‘illegal’ mall voting)

De Villa explained that Bautista proposed this long ago “as a very good measure” to enhance the voting experience. She even described it as “very creative” and “very innovative.”

She pointed out that the Comelec, however, lost focus on this proposal, and the issue resurfaced only now.

De Villa said the PPCRV, as the citizens’ arm of the poll body, wants to make sure that the Comelec has addressed the legal issues on mall voting.

Has the Comelec, for instance, already transferred polling precincts from schools to a number of shopping malls?

De Villa also wants to know if the voters’ list already indicates the transfer of polling precincts to malls.

“Naka-record na ba doon? Kasi kung hindi, ang ina-avoid lang namin, ‘yung confusion sa botante,” she said. (Has that been recorded there? Because if not, what we want to avoid is confusing among voters.)

De Villa said she wants to avoid a scenario in which a voter goes to the wrong polling precinct on election day.

“E baka ‘yung iba, hindi na magkaroon ng pasensya na maghintay o lumipat pa,” the PPCRV chairperson said. (The others might not have the patience to wait or transfer to another precinct.)

Faith in elections at stake

Otherwise, she said, critics could file a complaint against the Comelec regarding mall voting.

Bautista said the Comelec en banc, or the commission sitting as a whole, passed Minute Resolution 16-0152 dated March 10 that authorized him to enter into memorandums of agreement (MOAs) with participating malls for the May 9 elections. This is “subject to compliance with legal provisions.”

He said the Comelec en banc also approved the transfer of polling places “to participating malls.”

The question still is, why rock the boat or change one of the procedures at a time when the Comelec faces bigger problems?

During the news conference on Wednesday, one of the bigger problems cited was the SC ruling that required the Comelec to issue voting receipts.

A day later, another issue exploded: the Comelec data leak that exposed the sensitive information of at least 54.4 million voters.

(Well, first of all, there are bigger problems? Well, we’re trying to solve those, and in a way we’re not the ones who created this challenge. But that’s okay. But, as I also said, what we’re doing and what we really want is to make the process of voting better and more comfortable.)

Larrazabal has already criticized the Comelec for its supposed lack of urgency in its preparations.

Election lawyer Emil Marañon III, for his part, said the Comelec seems “obsessed with superficial and cosmetic reforms” at the expense of “critical matters.” – Rappler.com