Duterte surges ahead in SWS poll

Apr 25, 2016 7:50 AM PHT
Rappler.com
Facebook Twitter Copy URL
Copied
The SWS survey was conducted a day after the controversial rape comment made by Duterte became public 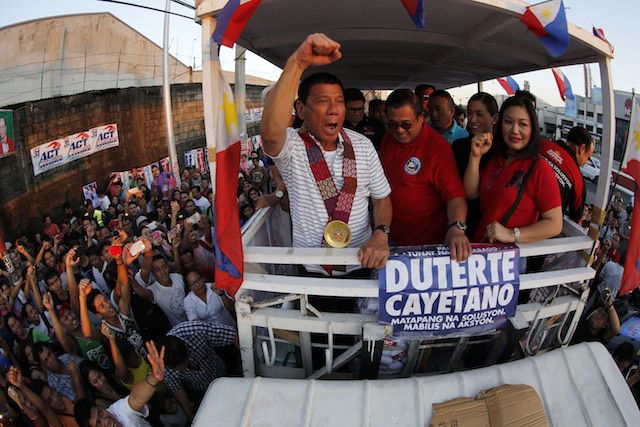 The survey was conducted April 18 to 20 among 1,800 registered voters nationwide. It was on April 17 when Duterte’s controversial rape remark went viral.

The survey showed that Duterte jumped 6 percentage points from the previous SWS survey, and now has a voter preference rating of 33%, the survey firm said.

In second place was Senator Grace Poe, with a voter preference rating of 24%, followed by Manuel “Mar” Roxas at 19%, Vice President Jejomar Binay at 14%, and Senator Miriam Defensor Santiago at 2%.

BusinessWorld noted that the survey was conducted a day after the controversial rape comment made by Duterte became public.

In a video that first went viral April 17, Duterte, during a campaign sortie in Quezon City, recounted a 1989 hostage-taking incident in Davao, where one of the hostages, Australian missionary Jacqueline Hamill, was raped and killed. His comment about Hamill drew flak from a wide range of critics.

The survey results, however, are not yet conclusive, political science professor Edmund Tayao told BusinessWorld, because the field work for the survey ended April 20, and the presidential poll frontrunner made other controversial remarks in the days since.

Reacting to the Vice President’s 6-percentage point drop in the latest poll, Binay’s spokesperson, Rico Quicho, said: “The true survey will be on the day of the elections. No amount of tweaking of results will refute the strong core support for the Vice President.”

Meanwhile, United Nationalist Alliance president Toby Tiangco said the Vice President’s team will continue campaigning hard to let people know “that Binay is the only candidate who knows how they feel.”

He cited the free education, senior citizen benefits, and hospitalization services, among others, offered by the Vice President.