Facebook Twitter Copy URL
Copied
(UPDATED) Poe's husband has already renounced his US citizenship under Philippine Law. He is still in the process of 'filing' documents for his renunciation under US law

MANILA, Philippines (2nd UPDATE) – A month before the May presidential elections, the husband of presidential bet Grace Poe renounced his American citizenship before a local official.

Llamanzares, in his affidavit, said “I…expressly and voluntarily renounce my United States nationality/American citizenship, together with all rights and privileges and all duties and allegiance.” 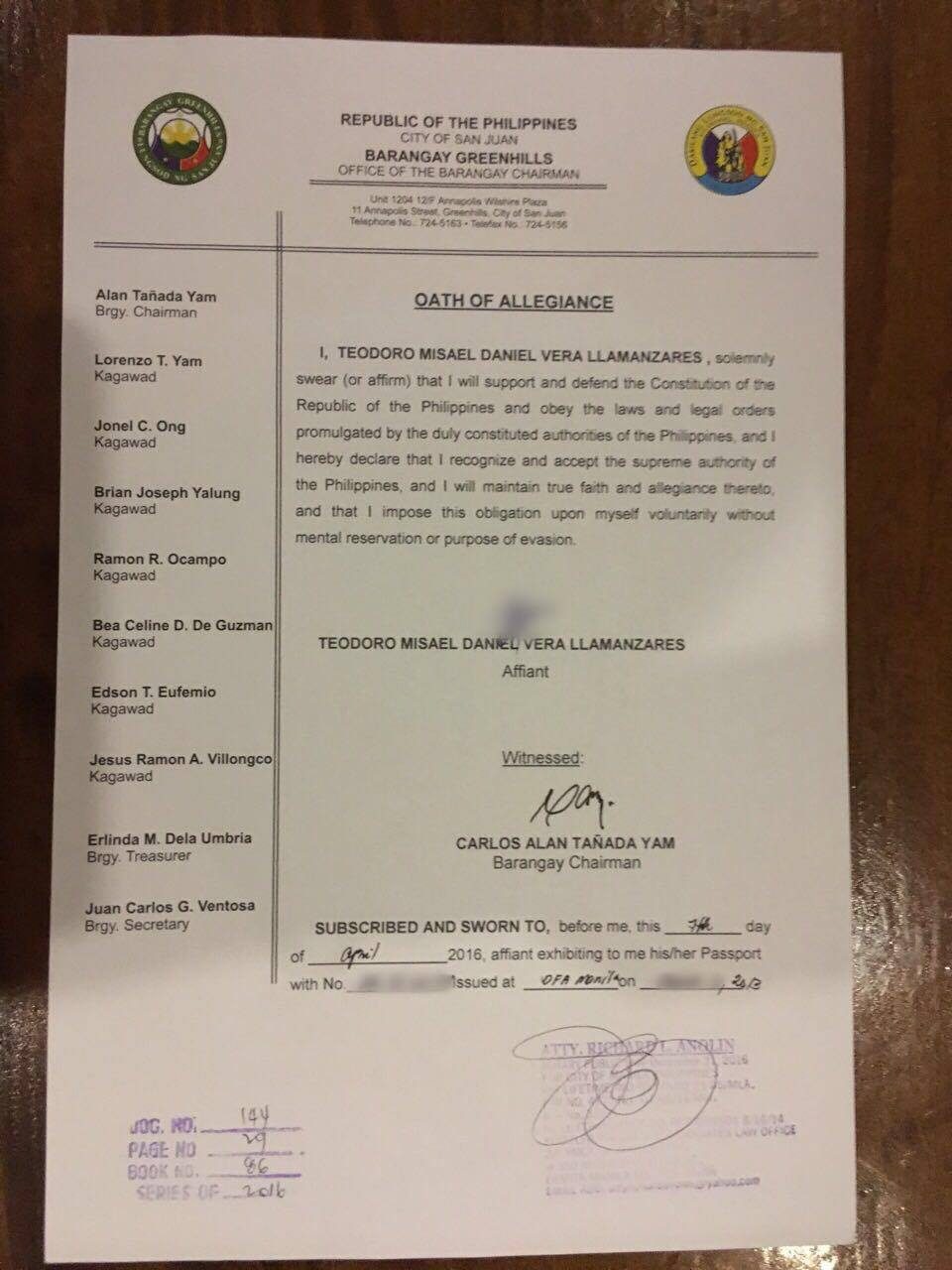 When asked during the Fast Talk segment of the 3rd presidential debate on Sunday night, April 24, Poe revealed that her husband had renounced his US citizenship.

Asked when, she said: “Siguro, mga isang buwan na ang nakalilipas.” (I think, around a month ago.)”

At the height of questions on her citizenship and residency in November 2015, Poe said her husband would renounce his US citizenship to end “all doubts on her administration.” She then vowed there would be no “American boy” in Malacañang.

Llamanzares had been a citizen of both the United States and the Philippines since his birth in 1970. He was born to Filipino doctors who were then studying and working in the US. (READ: Poe’s dad-in-law: Neil won’t be another Mike Arroyo)

It was also later publicized that Llamanzares was a former US Air Force member from 1988 to 1992.

Renunciation: PH law vs US law

Under Philippine law, a person only needs to take an oath of renunciation of foreign nationality before a notary public to effectively reject it.

But under US law, one has to fill out a questionnaire at the US embassy to confirm the renunciation. After which, the consular officer would issue a Certificate of Loss of Nationality.

Poe said her husband has already started the renunciation process before the US government but it would likely take a long time, just like her experience.

“He has gone but it’s a process na beyond their control how long they’re going to take to decide. But yes, he has already gone there,” Poe told reporters in a chance interview in Ilocos Sur on Tuesday, April 26.

Poe, who was a naturalized US citizen, renounced her US citizenship both under Philippine and US immigration laws.

In 2010, she renounced her foreign citizenship before a notary public in Pasig City. Months after, she did the same before a vice consul at the US Embassy in Manila. (READ: TIMELINE: Grace Poe’s citizenship, residency)

Her official Certificate of Loss of Nationality was only released in 2012, but the official date of her renunciation indicated there was on October 21, 2010, when she took an oath of office as MTRCB chair.

She maintained her family’s citizenship is not an issue, as her husband and 3 kids are all natural-born Filipinos. Poe earlier said she would give her children – Brian, 24; Hanna, 17; Nika, 11 – freedom to choose their citizenship.

According to the US Embassy, Section 349 of the Immigration and Nationality Act states that citizens who took “an oath, affirmation or other formal declaration to a foreign state or its political subdivisions” are subject to loss of citizenship. – Rappler.com