Apr 26, 2016 4:34 PM PHT
Ferdinandh Cabrera
Facebook Twitter Copy URL
Copied
The regional police have requested the poll body for an additional 200 to 300 cops from Camp Crame to assist as board of election inspectors 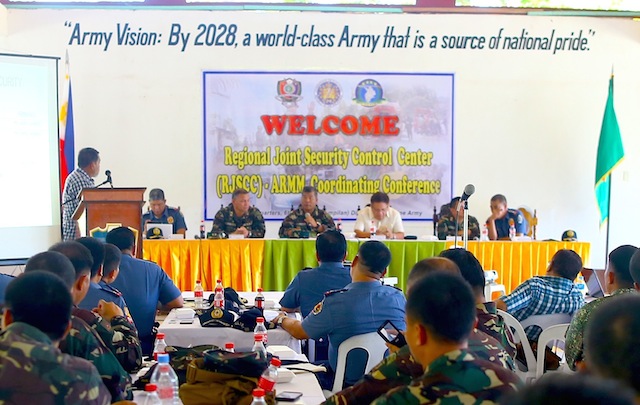 MAGUINDANAO, Philippines – The Commission on Elections (Comelec) will create a Special Board of Election Inspectors (SBEIs) for towns in the Autonomous Region in Muslim Mindanao (ARMM) that are at risk of failure of elections in May.

Among the towns mentioned in the briefing on election concerns are the municipalities of Tugaya, Butig and Masiu in Lanao del Sur. The town of Sultan Dumalondong was mentioned during a post-conference meeting with a Comelec official assigned in the area.

Authorities are closely watching the towns of Sultan sa Barongis, General Salipada K. Pendatun, and Datu Salibo in Maguindanao; Tipo-Tipo and Al Barka in Basilan; and Pata, Panglima Estino and Lugus in Sulu.

Tawi-Tawi has no election hot spot.

The towns are considered election hot spots because they are close to or controlled by armed rebels.

In some cases, the Municipal Board of Election Supervisors were forced to skip those towns for election preparations because of threats or they were related to some candidates.

Police in the region have requested the Comelec for an additional 200 to 300 police from the Philippine National Police headquarters to be deployed as Quick Response Force (QRF) who will assist as BEIs.

“We have asked from the Comelec to augment us with additional forces to assist as Board of Election Inspectors. Although they have not been trained about that, we are going to train them. At least a one-day workshop will do,” said Senior Superintendent Antonio Gardiola Jr, the deputy regional head of ARMM police.

Eastern Mindanao Command deputy commander Brigadier General Glenn Macasero, who also heads the Coordinating Committee of the Cessation of the Hostilities (CCCH), had signed a Memorandum of Understanding with their counterparts in the Moro Islamic Liberation Front for a pre-coordinated presence of troops expected to be deployed in rebel-controlled areas.

“There is a massive deployment of our troops to help secure election day and it is very important that we have coordination with our counterparts in the grounds to avoid misinterpretations and misencounters,” said Macasero.

Lieutenant Colonel Audie Edralin, the commanding officer of the 7th Infantry Battalion stationed in the border of Maguindanao, raised the issue during the conference.

“We observe rival candidates have supporters of these armed men affiliated with the rebel group, can we say they are now lawless and engage them without any jeopardy to the peace agreement?” he asked the panel in the forum.

Comelec-ARMM regional director Michael Abas replied, “The rule of law must prevail. You can respond, provided the procedure is in place with the CCCH, (Coordinating Committee on the Cessation of Hostilities) and file charges against the violators in the court,” he replied.

“Just follow the mechanism and you will not go wrong. The credibility of the security sector is a very crucial role we play in this democratic practice,” he said.

In the case of his area in the border of Maguindanao and North Cotabato, rampant display of firearms and rebels are seen in interior villages. This is what they want to avoid near the polling precincts come May 9, as it would disrupt the election process.

The JTF, through its campaign CHOP (clean, honest, orderly and peaceful elections) headed by Brigadier General Arnel Dela Vega and PNP-ARMM operations chief Senior Superintendent Rodelio Jocson, raised some election fraud scenarios that they will prevent from happening on May 9.

One such scenario is to switch machines from one destination to another after leaving the Comelec warehouse and the jumbling of passwords inside the envelope specific to every voting machine.

“This is what we want to work out with our counterparts in PPCRV,” said Dela Vega. – Rappler.com