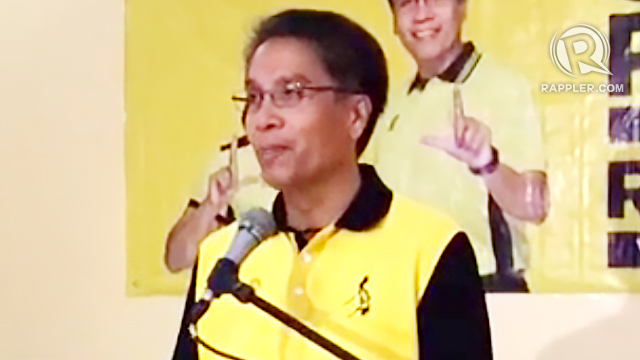 NEGROS OCCIDENTAL, Philippines – A local and international controversy may have done little to erode presidential candidate Davao Mayor Rodrigo Duterte’s preference survey rankings, but one of his rivals, Liberal Party (LP) standard-bearer Manuel Roxas II, said he continued to believe that Filipinos are “smart voters” and would choose the “right leader” on May 9.

“The only survey that counts is the actual survey on May 9,” Roxas told reporters in a news conference in La Carlota City on Tuesday, April 26. Roxas and running mate Camarines Sur Representative Leni Robredo campaigned in the province, home to over 1.7 million registered voters.

(A lot of developments happen. I’m confident that in the end, the right leader will win. A leader who is honest, clean, has a plan, has the right experience and the right track record to fulfil these plans.)

On the same day, results of the Pulse Asia survey showed Duterte still leading the pack at 35%. Senator Grace Poe trailed at second while Roxas and Vice President Jejomar Binay followed at 3rd and 4th, respectively. Senator Miriam Defensor Santiago was at a distant 4th.

It was after a controversy over Duterte’s remarks about an Australian missionary who was raped and then killed during a 1989 Davao hostage crisis. Duterte then was serving his first year as mayor of the city.

Roxas and Robredo barnstormed the cities of Kabankalan, La Carlota, Cadiz and Bacolod on Tuesday, with less than 2 weeks left before the official campaign period ends. This is the tandem’s second visit to the vote-rich province, considered a bailiwick of Roxas.

The LP standard-bearer traces his roots to Bago City in Negros Occidental, the hometown of his mother, Judy Araneta-Roxas. According to the March 2016 Manila Standard poll conducted by Laylo Research Strategies, Roxas is the top preferred presidential candidate in the newly-formed Negros Island Region, which Negros Occidental belongs to.