Binay’s dream: PH where the poor get free manicure, pedicure 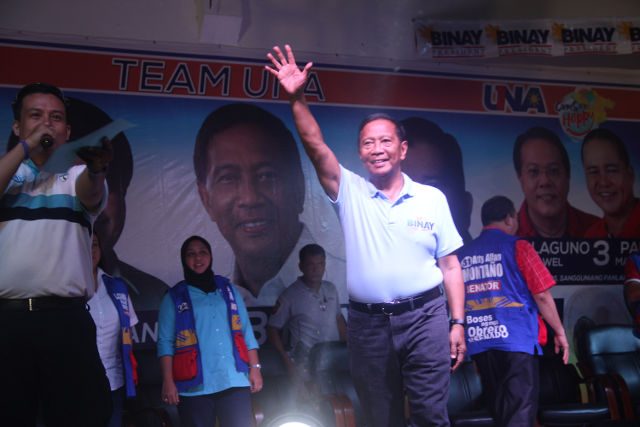 CAMARINES SUR, Philippines – How much does Vice President Jejomar Binay want to lift Filipinos from poverty?

If he is elected president, no Filipino would die of curable diseases, and they will get additional benefits that would even include “free manicure and pedicure,” he said at a rally in Sagñay town here on Tuesday night, April 26,

“Under my leadership, no poor Filipino will die because of illness. I want our country [to be rich enough] that even the manicure and pedicure are free, especifically for senior citizens,” he told the crowd in Filipino.

The United Nationalist Alliance standard-bearer faced a crowd of about 6,000 at the Sagñay Sports Complex, telling them of his plans for Bicol region and how he is the “fittest” among rivals to become president of the country.

Sagñay, a sleepy coastal town, is a bailiwick of his allies, the Fuentebella clan.

If elected, Binay promised, he would construct an express highway in Del Gallego, Camarines Sur, to shorten travel time to Bicol from Manila, as well build another airport in the region.

“We will create more jobs and irrigation is free. Many of our land are unproductive because we lack of irrigation and water,” he added.

He also vowed to lower power rates here, the region being a producer of clean and renewable energy that can also supply Metro Manila through the Luzon Grid.

Binay repeated his plans for barangay officials which he had been saying in other provinces as well: to postpone the barangay election set for October, and to provide village officials salaries and automatic membership in Pag-ibig and GSIS.

The Vice President has been campaigning on a platform of improving and widening social services, higher pay for teachers, and tax cuts for those earning P30,000 a month and less.

His critics have questioned how he planned to carry out his promises without new taxes that would ensure continued funding for social programs. (READ: Briones to candidates: How will you fund promised programs?) 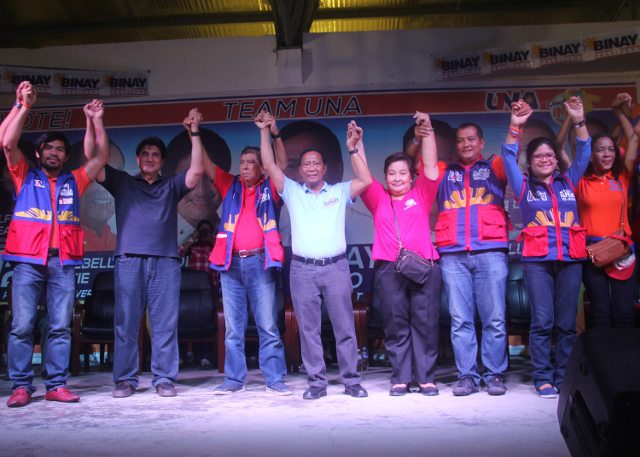 The Vice President told the crowd his oft-repeated criticism of his 3 strongest rivals in the presidential race, sparing only survey tail-ender Miriam Defensor Santiago.

He warned them against a candidate whose “answer to poverty is killing,” obviously referring to Davao City Mayor Rodrigo Duterte, the current front runner in surveys.

“I’m talking to you as a father. We have a moral responsibility to choose the fittest presidential candidate with moral ascendancy. Vote for a president you can be proud of this coming election,” said Binay, who is hounded by moral ascendancy issues himself stemming from corruption allegations when he was Makati mayor.

“This person should not be elected as president. I’m not like this candidate for president whose answer to poverty is killing. Everybody has a right to life. Nakakatakot siya maging presidente (It’s scary to have him as president),” the Vice President added.

Clearly referring to Senator Grace Poe, he reminded voters of the candidate who once renounced her Filipino citizenship.

“She was an American citizen. Now, she is running for president after pledging allegiance to United States,” he said.

Poe had renounced her American citizenship years ago.

Binay also said Poe’s own husband cannot vote for her since he is an American citizen.

Neil Llamanzares, the senator’s husband, has been a dual citizen of the US and the Philippines, but has started the process of renouncing his American citizenship since criticism mounted about the senator’s own citizenship. Mr Llamanzares is a registered voter in San Juan City.

Binay meanwhile said administration candidate Manuel Roxas II was “full of incompetence” when the latter served for many years in government. “He neglected Yolanda victims,” the Vice President said, touching on the biggest controversy that hit Roxas, following slow response and relief in the aftermath of the Super Typhoon Yolanda (Haiyan) in Eastern Visayas in 2013.

“I’m the most qualified and fittest for the presidency. I am very competent as I have the longest record in public service,” Binay said.

The Vice President was Makati mayor for a total of 21 years, and had also served as presidential adviser on overseas Filipino workers’ concerns and public housing chief until he resigned from the Aquino Cabinet in 2015.

He started out as the front-runner in the presidential race until he was dragged down by the yearlong Senate probe into corruption allegations against him when he was Makati chief. He is now ranked fourth in the latest Social Weather Stations survey, dropping to an all-time low of 14% voter preference from a high of over 30% in January 2016.

Binay started Tuesday his 3-day campaign in the Bicol region, which will also bring him to Sorsogon on Wednesday, and Albay on Thursday. – Rappler.com