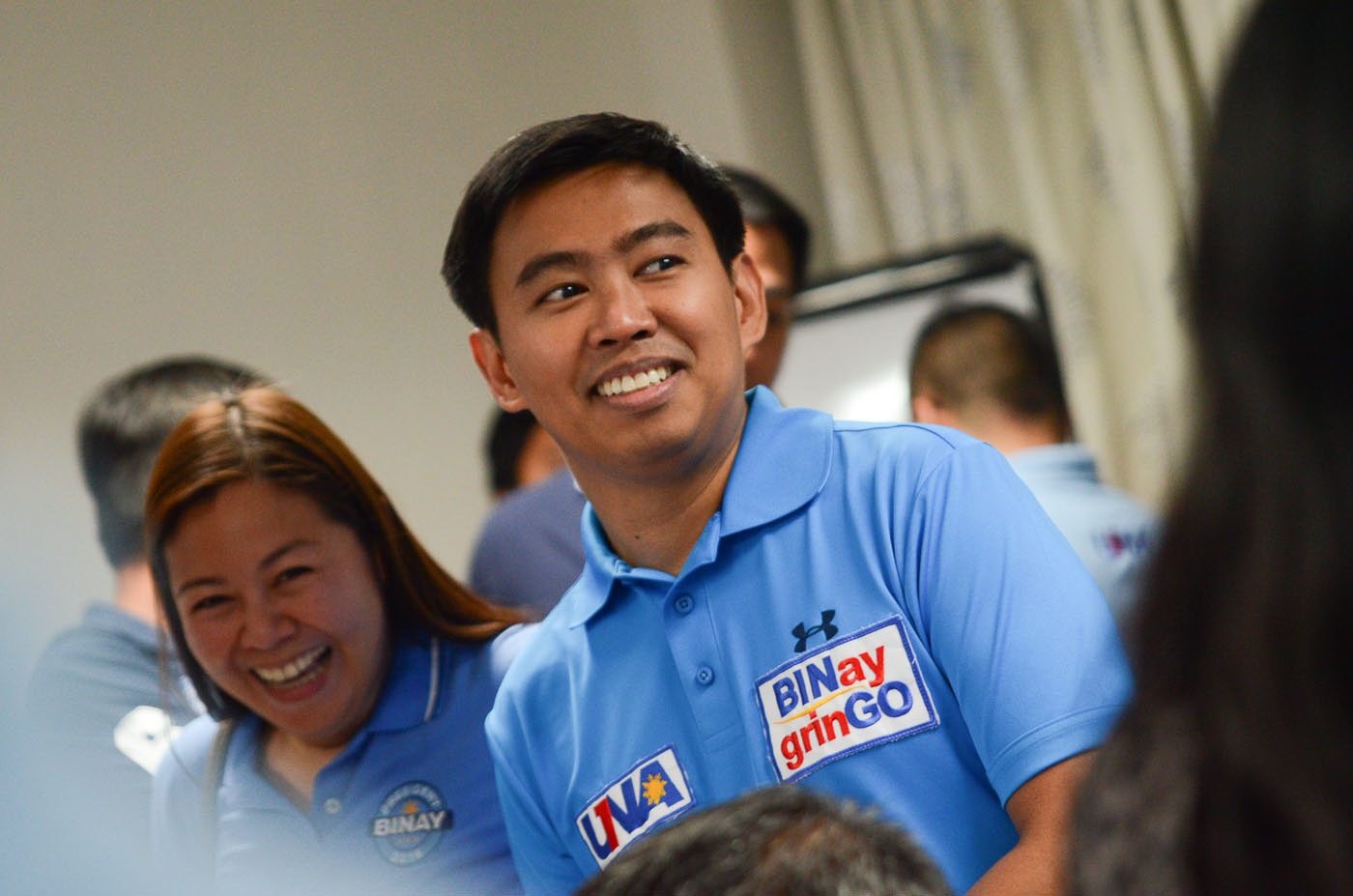 Facebook Twitter Copy URL
Copied
How much do we know about Junjun Binay, Baste Duterte, Brian Llamanzares, and Paolo Roxas? What are their roles in their parents' presidential bids?

MANILA, Philippines – Before them there were Bongbong Marcos, Noynoy Aquino, Jinggoy Estrada and JV Ejercito, and Mikey and Dato Arroyo.

The sons of the current crop of presidential candidates know, however, that getting the prestigious First Son status would require them to work just as hard as their parents on the campaign trail.

You must have seen them – Junjun Binay, Baste Duterte, Brian Llamanzares, and Paolo Roxas – either as substitutes when mother or father cannot make it to certain campaign stops, or as dutiful backroom assistants.

But how much do we know about them? What are their roles in or contributions to their parents’ presidential bids? Rappler gives us a glimpse into these young men’s lives.

Junjun Binay started early in politics. At the age of 15, he bacame Sangguniang Kabataan president of Makati, a position he held for 3 terms. He then became a city councilor for another 9 years, and then Makati City mayor, a position held by his father from 1986 to 2010.

In March 2015, the Office of the Ombudsman suspended him and other city officials in connection with the allegedly overpriced Makati City building. With people backing him up by protesting outside city hall, Junjun stayed.

In June 2015, Junjun received a second preventive suspension order, this time over the alleged anomalies behind the Makati Science High School building. The Court of Appeals refused to act on his petition for a temporary restraining order (TRO), forcing him to  step down on July 1.

Three months later, just before he was to file his certificate of candidacy for reelection, he was ordered dismissed from service and perpetually disqualified from public office by the Ombudsman. Junjun is the only son of Vice President Jejomar Binay, and a younger brother to two other politician siblings, Senator Nancy and Representative Abigail, who is now running for Makati mayor. Junjun attended the University of the Philippines in Diliman, where he graduated with degrees in creative writing and public administration.

He is a widower. His wife, Kennely Ann Lacia, died while giving birth to their 4th child, who was named after her mother. Maria Kennely’s elder siblings are Jejomarie Alexi, Maria Isabel, and Jejomar III.

Junjun actively plays a role in his father’s campaign team: he heads the group that finalizes the sortie schedule of the Vice President.

A source in the Binay camp also described Junjun as his father’s “teddy bear” – someone whom the UNA standard-bearer could talk to in between rallies and motorcades to destress.

Junjun would occasionally bring some of his children along during sorties, no doubt a source of cheer for the candidate. Baste has become an overnight social media sensation following the popularity of his father, Davao City Mayor Rodrigo Duterte. The 28-year-old is a businessman, musician, and surfer. He’s recently added “crush ng bayan” to his titles, partly thanks to his bad boy look (tattoos, lip ring, and all).

The youngest of Rodrigo Duterte’s children with first wife Elizabeth, Baste is the one who campaigns among overseas Filipino workers, usually with actor Robin Padilla. He is also in charge of rallying Duterte’s youth supporters, often speaking in front of students and “Youth for Duterte” events. Baste has been living with the mother of his second child, a one-year old boy, for 3 years now. He is also a father to a 5-year old girl with a former. Brian Llamanzares courted controversy recently for posting on social media a photo of him wearing an expensive, then supposedly fake, pair of Nike McFly 2015 shoes. The 24-year-old son of Senator Grace Poe is the eldest in a brood of 3. He tried out acting in television and movies before working as a news reporter. In August 2015, he had to go on leave to focus on her mother’s presidential bid.

As head of the coalition of support groups for his mother, he goes around the country to actively campaign and meet volunteers. 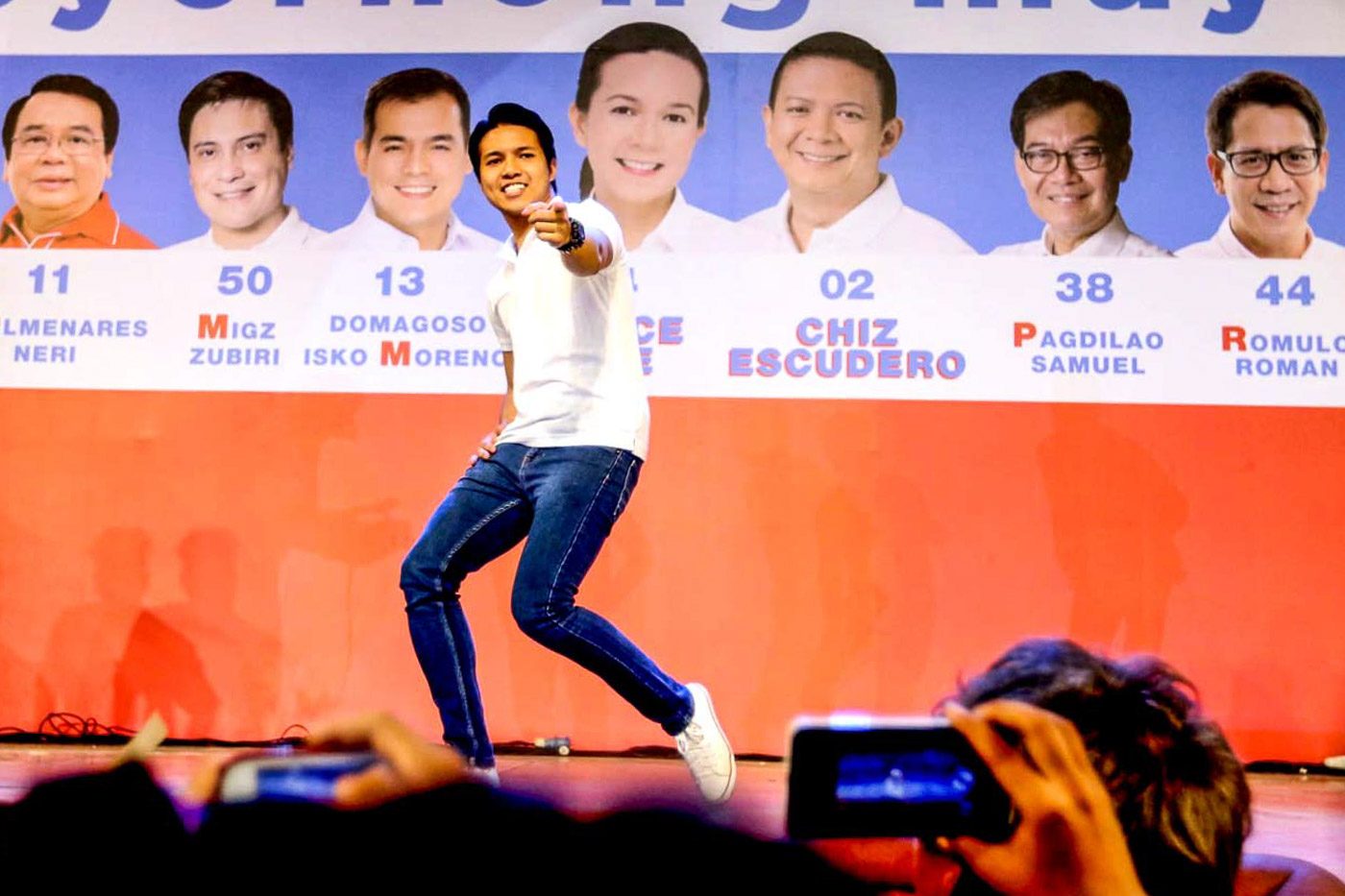 Brian, a graduate of the Ateneo de Manila University, was previously linked to artist/talent Myrtle Sarrosa and actress Jasmine Curtis-Smith. Paolo Gerardo, 22,  stumps for his father, former Interior Secretary Manuel Roxas II. He sometimes represents him in local gatherings, even in barangay level sorties, as well as in big events attended by the President.

Paolo has also spoken before Ateneans at least twice in the past.

The Yale student also goes on “palengke” (wet market) runs in different areas around Metro Manila. Usually, he talks to locals and gives out campaign materials during those runs. Pao is Roxas’ child with former girlfriend and 1971 Miss Young International Philippines Maricar Zaldarriaga. He served as his father’s best man during the latter’s wedding to broadcaster Korina Sanchez in 2009.