Poe to Duterte: Why blame me? Disprove bank account 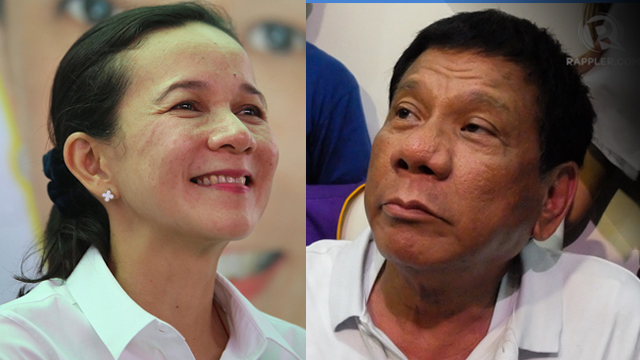 BATAAN, Philippines – Presidential bet Grace Poe lashed out at her rival, surveys front runner Rodrigo Duterte, and his camp for blaming her for the exposé on his alleged P211-million undeclared bank account.

Poe denied her hand in the allegation, even as it was made by vice presidential candidate Senator Antonio Trillanes IV, who is running solo but supports Poe for president.

(Before, I was just being quiet, but now I think this is too much. I’ve been trying hold my tongue since he made the rape joke.)

“Patunayan niya, at saka siya siguro, patunayan niya rin na hindi totoo yung mga sinabi,” she added. (Prove it. He should also prove that allegations against him are not true)

The neophyte senator challenged Duterte to prove his innocence by opening to public scrutiny the account in question.

After all, Poe said, it was the mayor and his running mate Alan Peter Cayetano who challenged candidates to sign a waiver on bank secrecy.

(The easiest way is if he would allow [the opening] if the account is legitimate. He was the one who started the signing of waiver, right? He said he would die for the country. Isn’t this one way [of proving that]? If you could not do this, how much more other acts [you promised]?)

A visibly irked Poe said Duterte should present evidence to prove his claims against her.

(Now, this is one chance. And then he’ll blame and say I’m the one who paid for this exposé? Of all people he would blame, he really chose me.)

(The problem is they always hit me. When they have allegations against me, I have to prove whether it is true or not. Now, it’s their turn. Why would he say that it was paid for? How did I pay for it? I did not even know about it until it was publicized.)

Poe also hit Cayetano for dragging her into the issue. Cayetano said the allegation is “a desperate ploy” of Trillanes – his party mate in the Nacionalista Party – to bring down Duterte and promote Poe, who is far behind the mayor in pre-election surveys.

Poe then defended Trillanes, saying he has a track record of being “unstoppable” in investigating anomalies. Trillanes, she said, is only after the truth.

(Why would he blame me? Doesn’t he know him? He was with Senator Trillanes in the hearings on the Priority Development Assistance Fund. Can any one stop him if he knows something? Of all our colleagues in the Senate, if there’s one person who is unstoppable in probing anomalies – whether they involve a friend, ally, or foe – that’s Senator Trillanes. Why would he not talk to him directly?)

Trillanes accused Duterte, who is known for his supposed simplicity, of hiding a bank account amounting to P211 million. He also alleged that Duterte’s children and common-law wife have millions of pesos in bank deposits.

Duterte, in response, challenged Trillanes to prove his allegations, adding he would take back the waiver he earlier signed.

“I’ll take the waiver and I will tell him, ‘Prove it,’ I will not make it easy for you (Trillanes). I will not play into your hands. You prove it,” Duterte said on Wednesday.

Asked by reporters who he thinks paid Trillanes to do it, the tough-talking mayor hinted it was Poe, as she is the preferred presidential bet of Trillanes. – Rappler.com