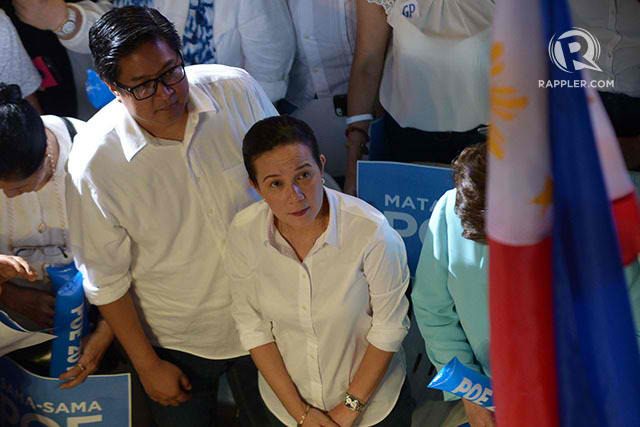 BATAAN, Philippines – Presidential bet Grace Poe has lost her patience with former Senator Francisco Tatad for his unrelenting filing of charges against her and her family.

In his complaint before the Bureau of Immigration, Tatad asked the agency to determine if Llamanzares is illegally staying in the country.

Llamanzares is a natural-born citizen of the Philippines and the United States since birth, having been born to Filipino parents who were then working and studying abroad. He has started the process of renouncing his American citizenship. (READ: TIMELINE: Grace Poe’s citizenship, residency)

She cut the interview short.

Tatad alleged that Llamanzares, a former US Air Force member, is not a recognized dual citizen of the US and the Philippines under the country’s law.

“In fact, he is not even officially recognized by the BI as a dual citizen…. To immigration authorities, he is still officially just a US citizen,” the complaint stated.

He also alleged that Llamanzares has no working permits, which is a violation of immigration laws.

Tatad was among the senatorial candidates of Poe’s father, the late action hero Fernando Poe Jr when he ran for president in 2004. Now, the former senator is a known ally of Poe’s rival, Vice President Jejomar Binay. – Rappler.com