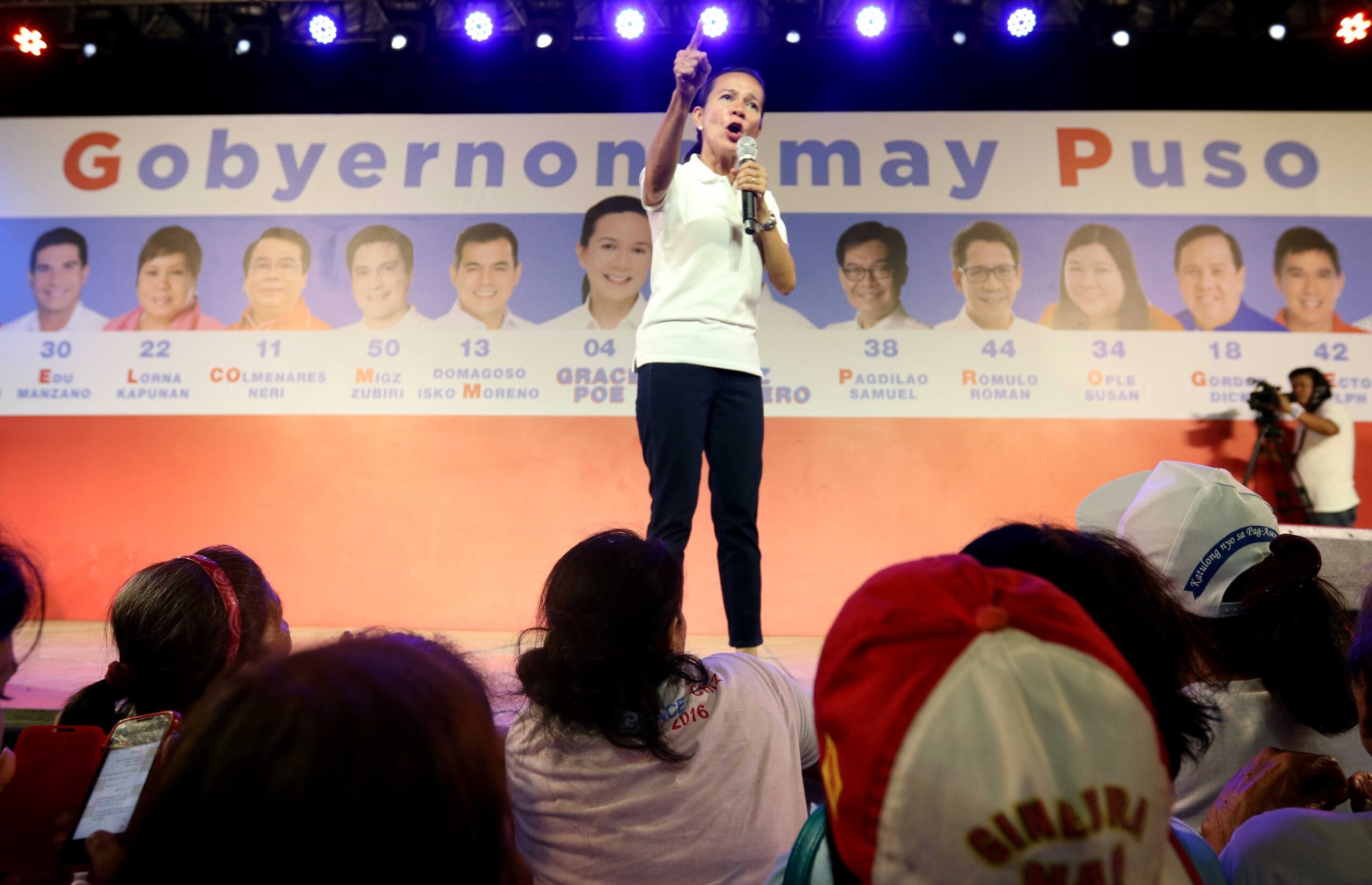 MANILA, Philippines – So little time, so much to catch up on.

Presidential bet Grace Poe had been the front runner in pre-election surveys for the longest time… until Davao City Mayor Rodrigo Duterte bumped her off the top spot just a month before election day.

It was the biggest hurdle the Poe campaign team had to face post-disqualification case. They lacked clear messaging and ground organization. (READ: Poe tweaks strategy after Duterte snatches lead)

With the presidency slipping through her fingers, Poe has shown a change in attitude in recent weeks. The usually calculated senator is now feistier in her interviews and statements, especially on Duterte, her closest rival.

If before Poe would give vague answers, in an attempt to avoid controversy and attacks against her rivals or critics, now she does not mince her words.

On Wednesday, April 27, Poe was asked for her reaction to former Senator Francisco Tatad’s filing of a deportation case against her husband Neil Llamanzares.

Tatad has been continuously filing charges against Poe and her family. Even when the Supreme Court said they would no longer accept any appeal on the decision to allow Poe to run, Tatad still filed for one.

It is normal for reporters covering Poe to see her feisty side – although restrained – especially when she does not want the questions asked of her. This is something universal, though, among presidential candidates. But this time, Poe could no longer hide her loss of patience over Tatad’s unrelenting attacks against her.

A visibly irritated Poe answered the questions before cutting the interview short.

Poe, on the same day, also could no longer hold her silence over Duterte, especially when he and his camp accused her of having a hand in the exposé on a supposed secret bank account that the mayor maintains.

An irked Poe said Duterte should present evidence to prove his claims against her.

(Now, this is one chance. And then he’ll blame and say I’m the one who paid for this exposé? Of all people he would blame, he really chose me.)

(The problem is they always hit me. When they have allegations against me, I have to prove whether it is true or not. Now, it’s their turn. Why would he say that it was paid for? How did I pay for it? I did not even know about it until it was publicized.)

Poe said on Thursday, April 28, that Filipinos should choose a president who is “stable” and has “word of honor” – an attack against Duterte who is known for changing his minds, from running for president and policy measures to signing a bank waiver.

(We need a president who is stable, who would keep his word, who would not threaten us. Because jobs here will also be affected, remember that.)

Poe admitted she was just restraining herself about Duterte for the longest time now.

(Before, I was just being quiet, but now I think this is too much. I’ve been trying hold my tongue since he made the rape joke.)

The moment Duterte’s rape joke became viral, Poe issued a statement saying the mayor’s remark was “distasteful and unacceptable, and reflects his disrespect for women.”

But when it was Poe’s chance to ask Duterte the question face-to-face during the last presidential debate, the senator – being the non-confrontational person that she appears to be – did not grill him enough on the topic, according to political analyst Aries Arugay.

The heated last weeks of the campaign have brought out changes in Poe’s image and her campaign strategy. May 9 will tell us if these would all work. – Rappler.com