Grace Poe: This is how a mother campaigns for president Facebook Twitter Copy URL
Copied
Grace Poe's Last Take: Despite a most hectic campaign schedule, she takes the time to go home every night from provincial sorties to be with her family

MANILA, Philippines – If there’s one thing that sets presidential bet Grace Poe apart from her rivals, it’s her being a mother to 3 children, two of whom are still minors.

This is one of the primary reasons why Poe hardly stays overnight in places where she holds sorties, even if it’s in the Visayas or Mindanao, where it would be more convenient to just spend the night.

While some may say this could be a hindrance to her all-out campaign – considering that she has slipped to the second spot – for Poe that’s hardly the case.

“Even if it’s physically difficult, she makes it a point to go home every night from sorties to be with her kids,” an insider said.

In a span of 3 months, Poe has stayed overnight out of town, only at least twice – before and after the delayed 2nd presidential debate and one during a sortie in Camarines Sur.

Even on Sundays when she has meetings, Poe said she makes sure to go to church with her family.

Poe has 3 children – Brian, 24; Hanna, 17; and Nika, 11. Her children have also been the subjects of controversy over their citizenship. But Poe stood her ground – she would give her children, who are all citizens of the United States and the Philippines, the freedom to choose whatever they want to do with their citizenship.

Her eldest Brian, a former TV reporter, left his job in August and now goes around the country to campaign for his mother. He also heads the coalition of support and volunteers groups for Poe’s presidential bid. (READ: Who are running Grace Poe’s campaign?)

Brian drew flak over his alleged expensive shoes that went viral on social media. Just like any mother would do, Poe defended her son in public. But no less than his mother, actress Susan Roces, admitted that Poe scolded her son at home.

The senator’s older daughter is a college student. Of the 3, she is most concerned for their youngest sibling, Poe said. (READ: Grace Poe’s kids affected by citizenship allegations) 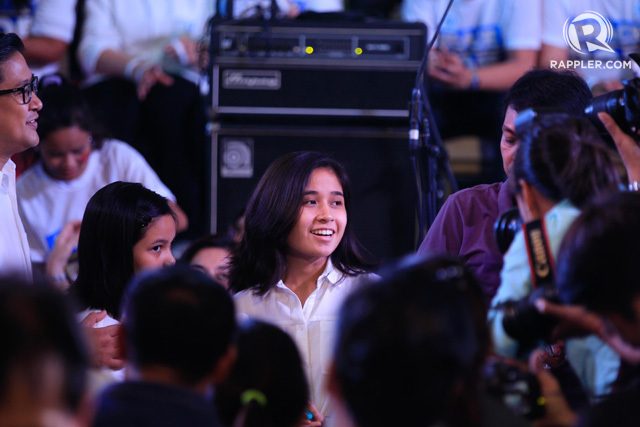 During an event with members of the digital media in Makati, Poe revealed that her youngest daughter had to meet her at the venue, as they now seldom see each other at home.

“Of course my teenagers are more than happy that I’m not home,” she said in jest.

“My youngest daughter actually had to see me here because she hardly sees me anymore. Because when I go home, it’s late, she’s asleep already since her bedtime is at 9pm. And then I leave in the morning at 4, she’s still asleep. Or I leave at 7 am, she’s already left for school,” she said.

Poe then shared a story of how, in the last few months, she had missed out on the life of her daughter. If before she would regularly measure Anika’s height, the campaign turned that simple activity into a luxury.

“We were in church together. There’s a certain time when I hear mass, even on Sundays when I have meetings, we meet in church. Maybe this will sound weird, but I caught myself saying, ‘How come you’re so tall already?’ You know when they have growth spurts? Normally, I would measure [her height], this time I haven’t in the past months. She was standing beside me and she grew in the past two months I wasn’t able to measure her,” Poe said, with a hint of regret in her voice.

I guess you can never take away her being a mother even in a hotly contested presidential race. In one of her market visits in Laguna, while Poe was walking in a crowded alley – surrounded by a sea of supporters, bystanders, and members of the media – she saw cupcake holders in one of the stalls and immediately stopped to buy some for her daughter. At a time when her ratings are reaching a plateau barely a week before the election, Poe still took a break from campaigning on Friday, April 29. This time, to attend and celebrate her youngest daughter’s graduation from grade school. Amid the noise and pressure of a campaign, presidential candidates are, after all, normal people, who still have to tend to normal things. While pressing flesh to win over voters is key to a successful campaign, that cupcake holder for a daughter holds its own in the grander scheme of things. – Rappler.com