CAMARINES NORTE, Philippines – Leading presidential candidate Rodrigo Duterte called Senator Antonio Trillianes a “disgrace” to the Bicolano race and a “soldier of misfortune” who was first to surrender in a Mindanao battle.

Speaking before an audience of thousands at the Daet agro sports complex, Duterte said, “Bicolanos are an honorable race but I’m disgusted with your fellow Bicolano Antonio Trillianes. He is a disgrace to your race. He was the one who first surrendered in the battle in Mindanao.”

Trillanes is seeking the vice presidency as an independent candidate, and is supporting the presidential bid of Senator Grace Poe. He traces his roots to Ligao, Albay. Duterte said that Trillianes accused him of having P211 million in undeclared wealth, which, according to him, is a fabrication.

Trillanes claimed that the Davao City mayor did not declare P211 million in his Statement of Assets, Liabilities and Net Worth (SALN).

Duterte said that Trillianes is an “idiot senator.” During his speech before political supporters, he also presented a copy of a Bank of the Philippine Islands bank account statement that showed a balance of P17,666.98.

He showed the document to the public for the first time during the sortie in Daet, Camarines Norte. 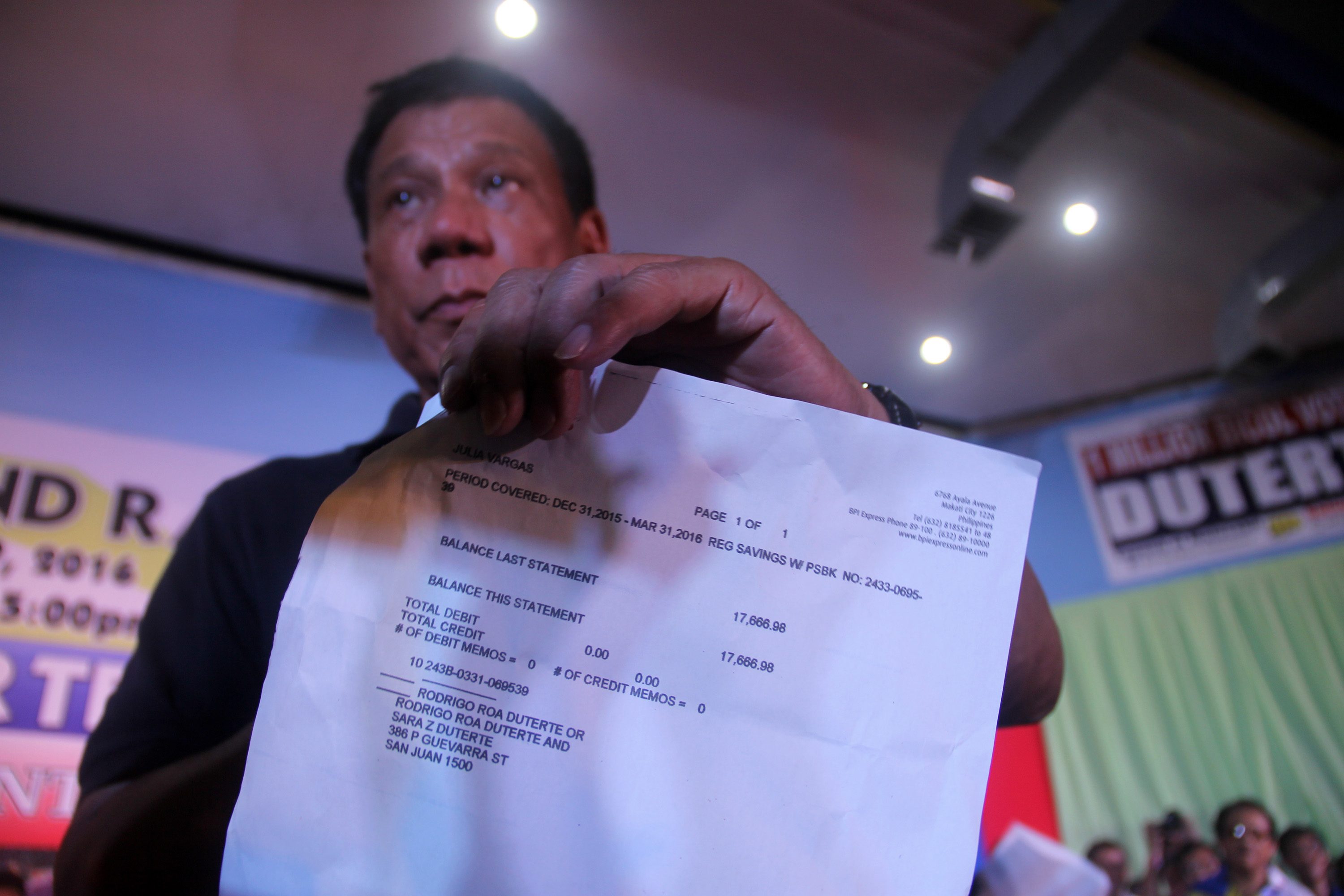 Duterte also hit his contender Liberal Party candidate Mar Roxas for riding on the issue pushed by the Bicolano senator. The tough-talking presidential candidate called Roxas an “idiot and weakling candidate with a history of chronic failure”.

He also admitted that he has money in the bank “but not as big as what Trillianes claimed.”

“De Lima is good but lost her values and notion of common sense. Imagine, I apprehended a big-time drug syndicate, but De Lima, a human rights lawyer, allowed this guy to continue his drug business and set him free while she filed a case against me,” Duterte said.

If elected president, Duterte said that his first order of business is to issue a directive to the military and the Philippine National Police to apprehend all drug syndicates and spare no one engaged in the illegal drug business.

“If I’ll make it to the presidency, my first order of business is for police and military to go all out against illegal drugs. I have to be strict. I need to be strong. Drug is a national security issue. I will suppress drugs. I will give you clean government. I want a peaceful country,” he said.

Addressing drug syndicates, Duterte said, “Don’t destroy my country, our children. There’s always a time. Time to be strong to deal with the criminals, I will try my very best. The best I can do to my country,” he added.

Once elected, Duterte repaeated what he had said in other sorties: that he will copy programs of those who came before him, namely Gloria Macapagal-Arroyo and Benigno Aquino III. – Rappler.com