May 1, 2016 1:00 PM PHT
Katerina Francisco
Facebook Twitter Copy URL
Copied
At a Labor Day rally, the vice presidential candidate also says voters should look at what candidates have done for the labor sector even before workers' rights became a hot topic for the elections 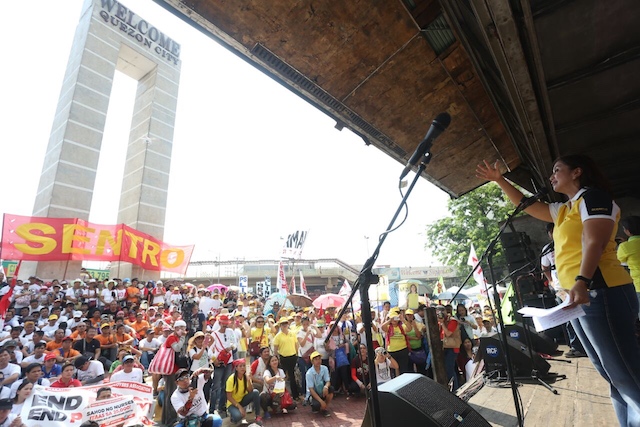 As a first measure to protect the rights of workers, the Camarines Sur representative said she wants to push for the passage of the security of tenure bill.

(The intent of the law is good, but there are many gaps that are exploited by employers, and these need to be stopped. The first step I see is to pass the security of tenure bill.)

The May 1 rally staged by various labor groups zeroed in on long-running problem of contractualization or endo, the colloquial term for “end of contract.” This refers to the practice by which companies hire employees for less than 6 months to avoid complying with the labor code requirement to regularize them after that period. (READ: No to ‘endo’ or contractual labor – presidential bets)

Aside from amending laws, Robredo also said that gaps in the procedural process should also be addressed, particularly in labor disputes against employers.

(If we look at the Labor Code, it’s in favor of employees, but not in the procedural aspect, where employees are forced to settle with employers. Because even if they won at the NLRC [National Labor Relations Commission], a very long appeals process is allowed under the law.)

The vice presidential candidate recognized that plugging the gaps in labor laws would mean encountering opposition from big corporations which condone or are involved in this practice.

But she said that political will and an “inspiring leadership” could help change the mindset.

(Definitely many will oppose this on the side of the employers, but this is something that we have to do. Perhaps we need a kind of leadership that will inspire the big [corporations] to be more socially responsible, in the sense that business is not all about profit. We also need to take care of our workers.)

While moves to amend labor laws are in the realm of the legislature, Robredo said the next vice president could act as an advocate for the labor sector, championing their cause and urging the next president to certify as urgent bills related to workers’ rights. 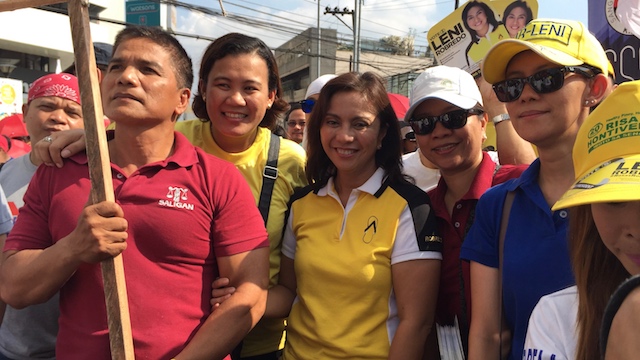 In her short message, the ruling party’s vice presidential candidate also urged voters to look beyond the promises made to the labor sector by candidates vying for national and local posts in the upcoming May 9 elections.

Robredo said that labor issues, particularly that of contractualization, is now a hot topic as politicians seek to court votes.

The Camarines Sur representative, who worked as a lawyer for indigent groups in Bicol before entering politics, urged the crowd to look at what candidates have done even before the elections.

(While many are trying to court votes this election season, with many making promises, I hope we remember that what’s important is not words, but actions. When they say that they love workers, the question we have to ask is, if you really love the labor sector, what did you do for us before the elections?)

Robredo said voters should look at the candidates’ personality rather than promises which, she said, are “easy” for politicians to “study.”

(Our personality is what we are, in the past, to the present, to the future. And this is what will serve as your guarantee that what you’re fighting for, we will fight for, too.)

Before she ran for public office, Robredo was connected with the Naga chapter of Saligan, providing legal help for the poor, fisherfolk, laborers, and marginalized sectors in Bicol. (READ: Leni Robredo: Low-key political wife goes national)

In her message, Robredo recalled how Saligan has long fought for the rights of laborers. While working for the group, Robredo said she has personally handled several cases where her clients had to wait years for a final decision on their cases, even if these have already been won at the NLRC. – Rappler.com