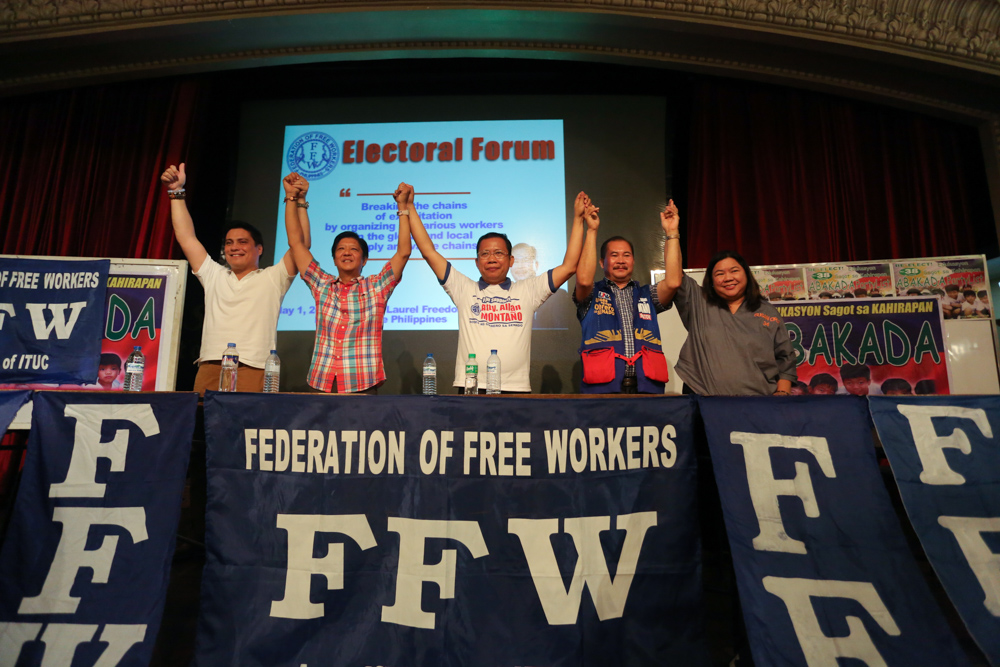 MANILA, Philippines – Vice presidential candidate Ferdinand “Bongbong” Marcos Jr made full use of the Labor Day celebration on Sunday, May 1, to further his platform of fixing the labor sector, which he wishes to handle should he win.

The poll front runner graced the events of 3 labor unions: the Philippine Trade and General Workers Organization (PTGWO), the Federation of Free Workers (FFW), and the Lakas Manggagawa Labor Center.

Marcos stressed his intention to head the Department of Labor and Employment (DOLE) to end contractualization and create more local jobs.

(That’s why I always say I want to request for the DOLE post, so I can end the inaction on “end of contract,” 5-5-5, practices of contractualization. We will stop that and we will revive the rights of laborers in the Philippines.)

All 3 labor unions which hosted Sunday’s events endorsed Marcos for vice president. Of the 3, PTGWO is the biggest with at least 100 affiliated labor groups.

(We hope to stop “endo.” We want the workers to be regularized.)

Tanaman said that Marcos’ father, the late dictator Ferdinand Marcos, was pro-workers during his administration.

“President Marcos loved the labor sector. He was the one who gave the 13th month pay, holiday bonuses. So we believe he [Senator Marcos] also loves the labor sector,” Tanaman said in Filipino.

Madeline Cramano is hopeful that Marcos will deliver on his promises. Cramano, mother of a graduating college student, wants an additional job so her son would not have to go abroad to work.

That is something former overseas Filipino worker (OFW) Boy Pitit also aspires for.

“Stop labor export policy. Our dream is that Filipino laborers will only work abroad because he or she wants to,” he said. – Rappler.com