MANILA, Philippines – Rappler and the Parish Pastoral Council for Responsible Voting (PPCRV) will be working together to safeguard the 2016 Philippine elections through the #PHVoteWatch map.

“We’re very very excited about our #PHVoteWatch with Rappler,” PPCRV national communications and media director Anna Singson said. “We have 700 thousand volunteers. If I could have even just a fraction of those (sending) information very easily, take pictures and tell us, o, voting na. They tell us what’s happening.”

The #PHVoteWatch map crowdsources cases of vote buying and vote selling, campaign offenses, election-related violence, and other forms of election wrongdoing among communities.

Patterned after Rappler’s online disaster platform, Agos, it allows users to report such cases no matter where they are. Such reports will then be coursed through appropriate authorities.

PPCRV reports on #PHVoteWatch may be viewed via the shortlink rappler.com/phvoteppcrv.

PPCRV volunteers may report directly to the map via Twitter using the hashtag #PHVotePPCRV.

See instructions on how to report via Twitter below: 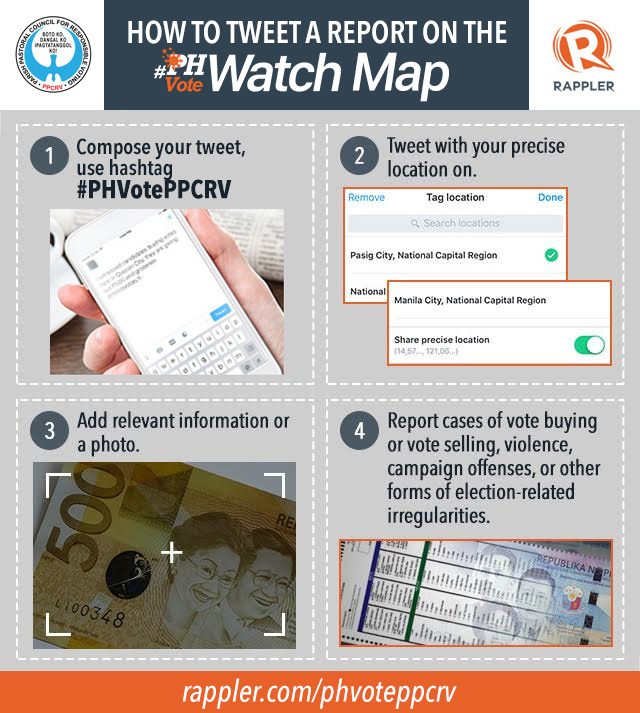 Rappler and the PPCRV also worked together to produce educational content for the elections, including a simplified step-by-step instruction on how to vote as well as instructions for pollwatchers.

The “How to vote” video below considers changes to the voting process after the Supreme Court decided to allow voter receipts for the 2016 polls.

PPCRV and Rappler also co-produced this video which simplifies instructions to pollwatchers on election day:

PPCRV advocates for the proactive involvement of the people for a clean, honest, accurate, meaningful, and peaceful elections.

The PPCRV promotes voter’s education and good governance, while also highlighting the needs of marginalized sectors such as the poor, the youth, persons with disabilities, indigenous people, abused women, laborers, and other vulnerable groups.

For this year’s elections, the PPCRV’s battlecry for a clean election is: Boto ko, dangal ko! Ipagtatanggol ko! (My vote, my honor! I will protect it!) – Rappler.com

For more information or to volunteer, reach PPCRV at 52-PPCRV or 0920- 67PPCRV. Or visit its website and follow #phvoteppcrv for updates.