Facebook Twitter Copy URL
Copied
(3rd UPDATE) Though the bank controversy deals him a blow in the Visayas, increased support for him in Mindanao allows him to snatch a clear lead over Grace Poe and Mar Roxas

MANILA, Philippines (3rd UPDATE) – Though the bank controversy hurt support for Rodrigo Duterte in some areas, he still managed to snatch a clear lead from his rival presidential candidates, the latest The Standard poll shows.

Duterte garnered 32% of respondents’ support in the survey, conducted by Laylo Research Strategies and first published in The Standard on Thursday, May 5. It is the newspaper’s last survey before the May 9 elections.

Conducted from April 27 to May 1, it covers the period when Senator Antonio Trillanes IV accused Duterte of hiding P227 million in a Bank of the Philippine Islands account.

The Davao City mayor posted a clear lead over his closest rivals Senator Grace Poe (25%) and administration bet Manuel Roxas II (22%). Because of the margin of error of +/-1.8, the latter two are statistically tied at second and third places. 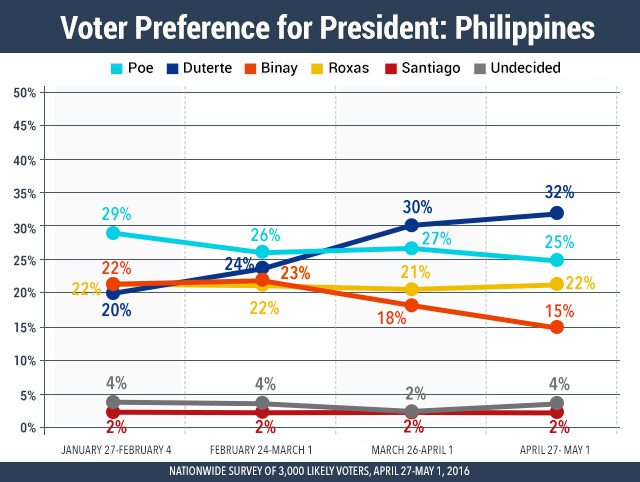 Despite Trillanes’ exposé, support for Duterte grew from 30% in the March 26-April 1 survey to 32% in this survey.

But the controversy seemed to hurt him in the National Capital Region and the Visayas.

In NCR, his rating dropped by one percentage point compared to the previous survey, allowing Poe to reclaim her solo first-place status in the nation’s capital.

In the Visayas, Roxas widened his lead over Duterte with 41% to Duterte’s 25%. Last month, Duterte was closing in on Roxas with his 31% almost catching up with the Liberal Party bet’s 35%.

What’s keeping Duterte on top is the continued surge in Mindanao support. In the Davao Region for instance, Duterte now has a phenomenal 87% of respondents’ support.

“We are elated that we have maintained our sizeable lead heading into next week’s presidential elections,” he said.

“While this is a confidence building development, we still believe we have to secure victory for Mayor Rodrigo Duterte by translating the survey numbers into concrete and overwhelming votes of triumph,” he added.

Duterte solidified his lead among Classes ABC with 41% but Roxas managed to steal second place from Poe with 23% to her 19%.

The Davao City mayor is also still the top pick of Class D with support for him even growing by 4 percentage points. Among Class E, he is also the favorite though with a slim lead over Roxas and Poe.

Despite his controversial rape remark that made headlines the week before the survey was conducted, Duterte became the top choice among women, grabbing the spot from Poe.

Interesting movements were also observed in geographical regions. For instance, in Eastern Visayas, voter preference for Duterte and Roxas experienced a shift in trends. Whereas Duterte (tied with Binay) was the region’s top choice last month and Roxas was in 4th place, this month, Duterte suffered a huge drop landing in 3rd place while Roxas surged to the top.

But Duterte made up for this with a rise in support for him in areas like the Zamboanga Peninsula (where Poe and Roxas had been leading), Bicol, Central Luzon, and Ilocos.

The Binay camp remained unfazed by the continued drop of the UNA standard-bearer in the pre-election polls.

“To the other candidates: Do not celebrate yet, good things are about to happen, Binay is coming,” said Binay campaign spokesman Rico Quicho.

Quicho based the Binay camp’s confidence on the “intense ground campaigning by the Vice President’s core supporters and parallel groups nationwide” which, he said, is not captured by the surveys.

“These efforts have intensified after April 29 which was the last day of the surveys,” he said.

Quicho added that Binay’s “determination and composure energizes our ground troops who are pounding the streets and knocking on doors as we speak.”

“History will indeed repeat itself. This election will be won on the ground on election day,” he said. – Pia Ranada/Rappler.com