Much has been said and written about the husband of presidential bet Grace Poe, Teodoro Misael Daniel “Neil” Llamanzares. But what is the man like?

Most of the stories I have done about him revolved around his citizenship, his job at San Miguel Corporation, and the controversies involving the couple.

In the 10 months I covered Poe, I’ve only seen the man thrice, consistently wearing a pair of jeans and sneakers: twice at the Manila North Cemetery for Fernando Poe Jr’s birthday and death anniversaries, and during Poe’s declaration in September 2015.

In the entire time I followed Poe’s campaign, I’ve only interviewed him once, the day his wife of nearly 25 years declared her presidential bid. (READ: 15 things you did not know about Grace Poe)

He would easily stand out in a group, the tall man with the glasses. I remember him looking uncomfortable, as two of us reporters suddenly went up to him, placed our microphones near him and asked for his thoughts that day. Looking back, I’m glad I did that, as I think that is the only media interview he had ever granted since September. Yes, the man is that private.

In that interview, he looked calm, pleasant with a smiling face, and soft-spoken. The latter is an overused description of him by members of the campaign team.

Another insider said the senator’s husband is “shy,” a seeming contrast to his strong-willed senator-wife. (READ: 10 things I learned about Grace Poe on the campaign trail)

During Poe’s declaration, Llamanzares said that the family is proud of the senator and that they would stand by her in a campaign where mudslinging is expected.

Should critics target him as well, he said, “We’re ready for it.”

Fastforward to the campaign. Llamanzares indeed faced criticisms over his citizenship. He was heavily slammed for being a citizen of both the United States and the Philippines, with opponents saying there would be an American boy in Malacañang should Poe win. He also drew flak for being a former member of the United States Air Force. He was also alleged to have been involved in a fistfight with Poe’s running mate Francis Escudero.

Just recently, he renounced his citizenship before a barangay official – something that rivals again questioned. His renunciation before the US government remains to be finalized.

But while news about the possible First Gentleman get noisier by the day, this man just continues to keep to himself.

Poe’s husband has been out of the public eye all throughout the campaign. While he manages the campaign finances of the team and goes on meetings with local politicians and groups, he hardly joined any sortie or event – not until Friday, May 6, the last sortie and motorcade of his wife. His doctor-parents even got a taste of a presidential campaign sortie ahead of him.

Neil joined Poe’s motorcade in Laguna, the family’s hometown, all the way from Los Baños to San Pedro. He was seen throwing shirts and ballers to the people. 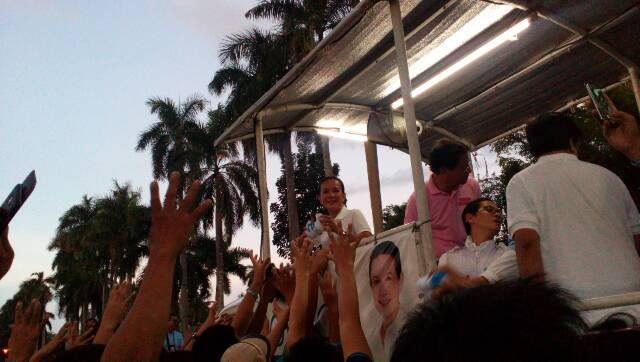 Their companions shared how Llamanzares was left giving away campaign materials by himself while his wife was granting interviews on the side.

“He was enjoying it,” one friend said.