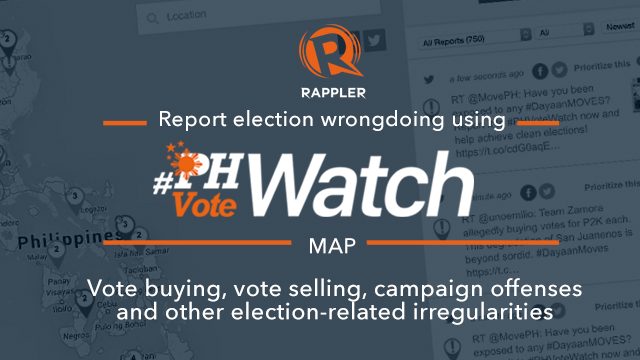 MANILA, Philippines (UPDATED) – On Monday, May 9, over 54 million Filipinos were set to cast their votes. Not everyone may be able to do so for various reasons.

Early voters encountered problems involving the vote counting machines (VCMs) – from VCMs that are not working to those that reject ballots.

Below are some of the technical problems, vote buying, vote selling, campaign offenses, and other election-related incidents reported through Rappler’s #PHVoteWatch Map.

MovePH has been receiving reports from its Movers on the ground regarding poll clerks and members of the Board of Election Inspectors (BEIs) who are not following the proper voting process.

A Mover from Tacloban City reported that the BEI assisting her did not fold her voter’s receipt, hence was able to see her vote.

This violates guidelines set by the Commission of Elections (Comelec). This also breaks voter privacy.

In a precinct in Brgy Culiat, Quezon City, Rappler David Lozada reported that poll staff forgot to apply indelible ink on his finger after voting.

“I had to remind them,” Lozada said, sharing his worries on flying voters.

The issue of some VCMs not issuing receipts were also reported. In the municipality of San Marcelino, two VCMs ran out of thermal papers for the receipt, however, when they were replaced, the VCM did not issue receipts for the first two voters. The BEI said that the votes were counted.

In Pantukan, Compostela Valley, a Mover observed that senior citizens had to wait in line alongside other voters.

According to the Comelec, precincts should have an express lane for the exclusive use of persons with disabilities (PWDs), senior citizens, and heavily pregnant women. (WATCH: How to vote on May 9?)

Precincts should also be “accesible and inclusive.” They should be near the entrace of the building and free of physical barriers.

In a press release made by Legal Network for Truthful Elections (LENTE) on Monday, May 8, numerous PWDs, elderly and heavily prgnant women all over the country were disenfranchised even with the Comelec’s Emergency Accessible Polling Places.

Meanwhile, Lente noted Comelec’s effort to protect the IP by piloting the Indigenous People Accessible Voting Centers and Separate Polling Places in some areas in Mindoro, which has reduced the incidents of “Hakot System”.

Many voters experinced delays in the voting process due to Vote Counting Machine (VCM) malfunctions and other technical difficulties. Citizen journalists on the ground reported the following cases of VCM-related problems:

Voters in Lucban, Quezon experienced delays in the voting process due to VCM errors. The local BEIs gave the voters the options to either vote immediately and allow the election officials to cast their ballots for them later or wait for the VCMs to be replaced which could take several hours and cast their ballots themselves.

Meanwhile, around 4,000 voters in the area are unable to vote due to their names being on the official list of voters despite having Voter IDs. Lucban municipal ICT admin Roy Cabungcal said this was caused by a local database error that ocurred on April 29. The local COMELEC has granted around 200 voters from Brgy Nagsinamo authorization to vote due to how they traveled 11 km to reach the polling center.

As a result of these failures, voters of Lucban organized a protest and a vigil asking for a declaration of failure of elections in Lucban.

A precinct in Jose P. Dizon Elementary school in Brgy. Pandan, Angeles City, Pampanga proceeded with manual voting after its VCM failed to function 20 minutes after the opening of the polls, according to the precinct’s BEI chairman Melie Ann Dizon.

The VCM was reported to reject its 7th ballot.

Some voters have already left in dismay, fearing that the whole process might take longer than usual. Some also worried that their votes were no longer safe.

According to the VCM technician, the malfunction might have been caused by “excess ink” in the ballots after voters marked the ballots too hard.

As of 10:36 am, a new VCM has arrived to replaced the broken one. Another VCM, however, broke down in the same school at the very same hour.

At past 11 am, the second broken VCM has been replaced.

Meanwhile, the VCM for precinct 4240 in Balara Elementary School has also stopped working after 86 successful reads at around 8:40 am, according to Teresita Ibanez, Cluster 797 BEI Chairman.

VCM technicians have exhausted all onsite means to no avail. They are still checking if a replacement VCM is available.

Replacement VCMs will have to come from the Comelec itself as no replacements are stationed at any voting area, according to the VCM technician.

In Mapandan, Pangasinan, a VCM malfunctioned was unable to read ballots at around 9:30 am. COMELEC technicians have yet to fix the problem and voting was temporarily suspended.

The VCMs in these areas have been repaired or replaced according to the local police.

A VCM also malfunctioned in Subic Central School in Zambales. While the machine was eventually fixed, senior citizens who could not withstand the heat while waiting for the repairs went home.

Brgy. Palanan was forced to switch to manual voting in clustered precinct 151.

In Brgy. Tabigue in Abuyog, Leyte, voting did not start on time as the VCM is not working. (READ: Leni Robredo voting delayed as VCM malfunctions)

Meanwhile in San Jose Central School in Tacloban City, a resident reported to poll watchdog LENTE that some voting receipts were not printed because the precinct ran out of thermal paper.

When refilled, however, the VCM was still unable to print receipts.

In Brgy. Tabigue in Abuyog, Leyte, people are getting tired of waiting in line as they were still unable to vote as of 9 am, 3 hours since the opening of polls.

The delay is due to a non-functional VCM.

Entering the 3rd hour of voting, another VCM broke down in Plaridel, Baybay City in Letye.

In Kalibo, Aklan,  61-year old voter Melchor Lagon of Taba-ao claimed that while he voted for Manuel Roxas II for president, his voting receipt indicated that his vote was credited to deceased presidential candidate Roy Señeres.

In Davao City, one voter in Clustered Precinct No. 53 reported that his receipt reflected zero votes.

If a voter’s receipt does not match votes casted on one’s ballot, she or he should report it to the BEI, who will then note this down in the Minutes.

The voter will be asked to sign the receipt and take an oath. If the voter’s claims are proven false, he could be charged with an election offense. (READ: Jail time for ‘frivolous’ complaints)

The same story goes for Central Elementary School in Nabunturan, Compostela Valley. The precinct’s VCM was succesfully printing receipts starting 7 am. However, it stopped working after the 37th receipt.

In case of VCM problems, BEIs should seek the help of VCM technicians.

If the technical problem cannot be handled by the VCM technicians and coordinators, the National Technical Support Center should intervene. The campaign period for both local and national candidates officially ended on Saturday, May 7. However, some campaign teams are still seen giving away materials on election day itself. (READ: List of bans for 2016 elections)

A Mover, however, observed that sample ballots and campaign materials of local councilors were still being distributed near precincts in Angeles City, Pampanga.

The distributors caught in the act were children. The same tactic was observed in Taguig. According to the children, tricycles – paid for by the barangay – were giving free rides to everyone along the Maharlika Elementary School.

“The kids did not want to reveal if they were paid or not,” Rappler Pat Nabong said. Meanwhile, some voters in Quezon City were spotted sporting “temporary voter’s IDs” bearing the name and face of a local candidate.

The temporary voter’s IDs were distributed among those who do not have an official one.

Netizens have reported power outages in several areas of Davao City during the early hours of election day.

Almost an hour before the closing of polls, various areas all over the country reported power outages:

In Jiabong, Western Samar, vote buying is reported to have started one hour past the opening of polls.

Witnesses reported cases of vote buying, tagging both mayoral candidates, who are allegedly engaged in a bidding war.

“These are holes from staple wires. This is new money,” Alviola said. “This is an indication that vote buying is rampant.”

Alviola observed the flow of crisp and holed P20, P50, and P100 bills among karinderya, sari-sari stores, and tricycle drivers.

In Legazpi City, cash stapled to campaign materials were also reported to be flowing.

@MovePH Vote buying is already visible here in Legazpi City It breaks my hear Gordon? #PHVoteWatch
in the bathroom pic.twitter.com/8sxlc2XbPi

Money is being distributed house-to-house by “community leaders” hired by candidates belonging to the Liberal Party. In Lapu-lapu City, Cebu, a mayoral candidate is reported to be distributing P100 bills, according to a Mover. Some recipients were complaing about the payment since they were promised to receive P200.

In Consolacion, P500 bills clipped on sample ballots were reported to be given away on the eve of election day.

Election watchdog Lente also reported vote buying in Lipa City, Batangas. Some residents were given sacks of rice accompanied by money anywhere from P1,500.00 to P3,000, according Lente. The group said fingers of these voters are then stained with indelible ink upon receipt. 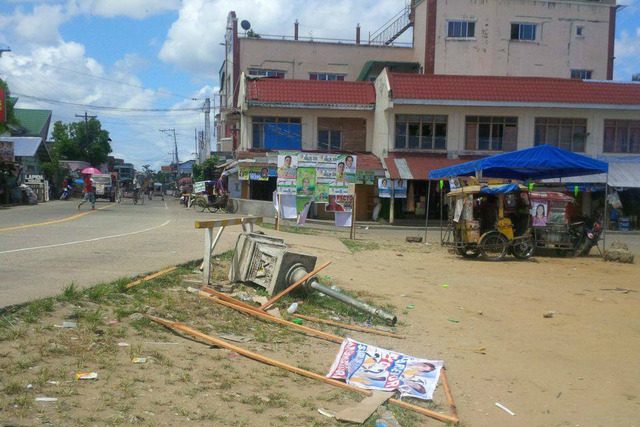 A mayoral bet in San Roque, Northern Samar was allegedly harassed by a barangay chairman on Saturday, May 7, two days away from election day.

Mary Jane Salomon, an independent candidate, claimed that barangay chairman Freddie Jarito humiliated her in public, destroyed her tarpaulin, and threatened her.

The incident, according to Solomon, happened while she was hanging her campaign tarpaulins in a market.

Tosto, however, said that the police officer who attended to the incident did not find a gun in Jarito’s possession. “Those were Solomon’s claims,” Tosto told Rappler.

Meanwhile in Cebu, Dumanjug councilor, Ely Amadora, told the police that he was shot by alleged goons of Vice Mayor Efren Guntrano “Gungun” Gica, who is running for mayor under the Liberal Party.

Amadora, who is seeking re-election under One Cebu, was unhurt.

In Zamabales province meanwhile, unidentified men riding in tandem ambushed the party of candidate for municipal councilor, Gerry Tia on the eve of the elections. No one was reported injured. Tia was a staff of former Masinloc Mayor Jesus Edora, who is running for mayor once more. Tia however is on the slate of Edora’s opponent, Arsenia Lim.

In a press release released Monday, May 8, Legal Network for Truthful Elections said it has observed several cases of unlawful entry of AFP, PNP and barangay officials, saying thera has been an increase in the number of reports involving violence and election-related deaths.

#PHVoteWatch reports are currently being verified by the Rappler research team, Movers, and partner poll watchdogs on the ground.