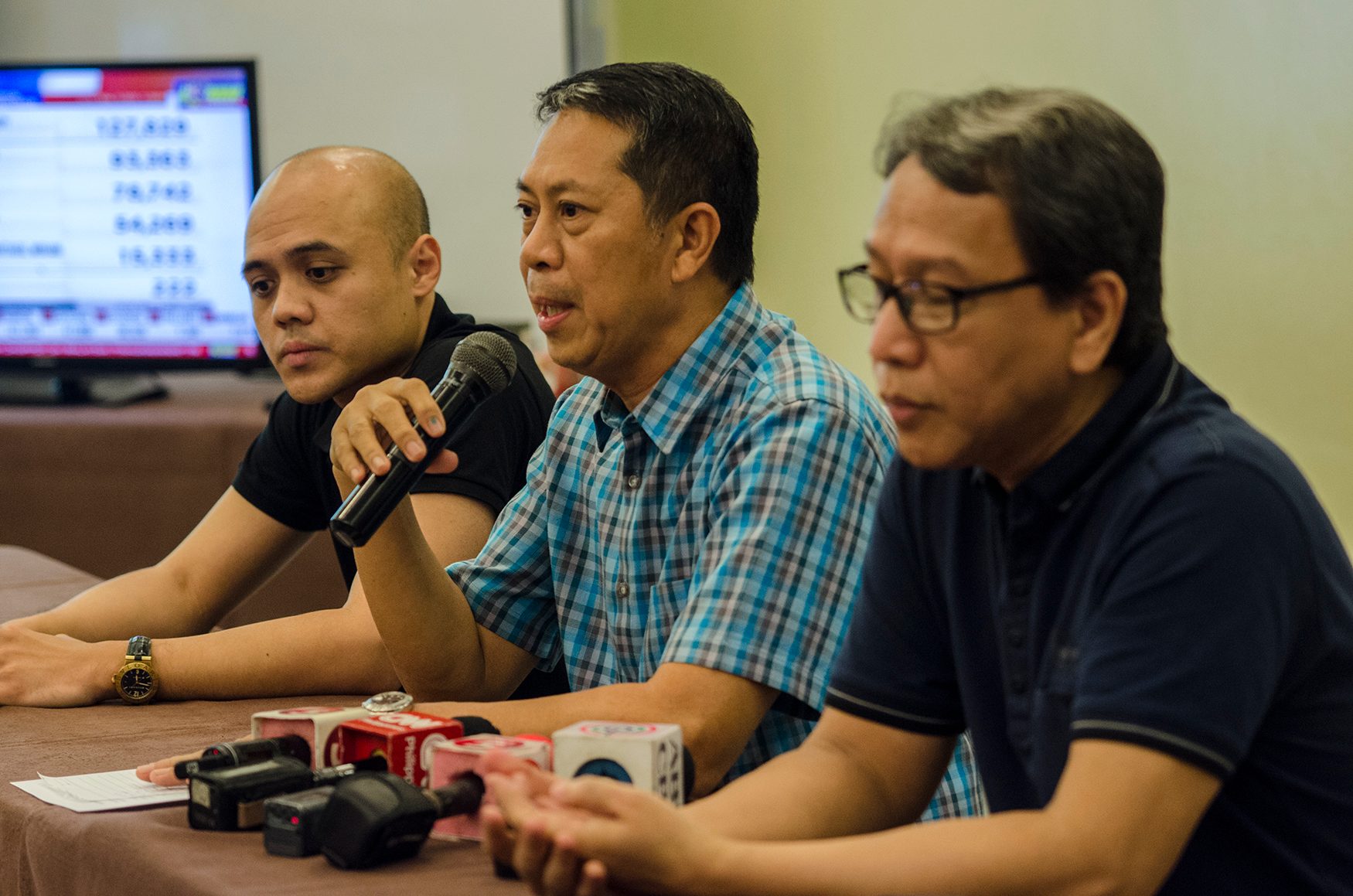 Facebook Twitter Copy URL
Copied
Vice President Jejomar Binay's spokesman clarifies, however, that they are not categorically accusing the Roxas camp of cheating

MANILA, Philippines – As the voting precincts close, officials from the United Nationalist Alliance (UNA) said they have received reports of the alleged intimidation of the supporters of Vice President Jejomar Binay and vote-buying by the ruling administration party.

UNA officials called a press conference on Monday, May 9, at their headquarters at the New Horizon Hotel in Mandaluyong to relay the reports to the media, but clarified that they are not outrightly accusing the camp of administration standard-bearer Manuel “Mar” Roxas II of cheating.

“At present we are collating the supporting documents evidencing these irregularities in order to determine whether the same show a systematic and widespread pre-conceived plan to sabotage the electoral process and mute the electoral will,” said Ilagan.

He said that in some areas in Masbate, Catanduanes, and Parañaque, the voters’ receipts of several people who picked Binay in their ballots allegedly reflected the name of Roxas instead.

He also said UNA has received reports of alleged vote-buying for Roxas, though he could not give specifics as of posting time when pressed for further details.

Salgado clarified that their press conference does not necessarily mean they are categorically accusing the Roxas camp of cheating.

“It’s too early to tell kasi kakatapos lang ng results. It’s early to tell at this point, but again, the fact is itong mga insidente [ay] received and verified by UNA,” said Salgado.

“Para sa amin, we’re still very confident that despite these incidents, the Vice President will win this election. Kaya namin ginagawa ‘to (press conference) para makita ng taongbayan na there are [incidents] certain areas aside from those being reported by media,” he added.

(For us, we are still very confident that despite these incidents, the Vice President will win this election. We’re doing this press conference for the people to see that there are incidents happening in certain areas aside from those being reported by the media.)

Davao City Mayor Rodrigo Duterte is currently leading in the partial, unofficial results of the 2016 elections.

Roxas and Poe are neck to neck in second and third place, while Binay trails behind in fourth place. Senator Miriam Defensor-Santiago is in last place.

According to Ilagan, the multiple reports of vote counting machines (VCMs) malfunctions across the country is a cause for concern as well.

“In Makati City alone, there were 28 defective machines that resulted in confusion and long queues that discouraged voters to cast their votes. Aside from Makati, we also have several areas na ganun din ang problema,” said Ilagan.

Ilagan also shared that Binay supporter Sitti Sahaya Piplani of Barangay Lukbutan, Isabela City in Basilan was barred from voting by the husband of a local politician affiliated wth LP.

At around 7 am, Sitti Piplani went to her polling precinct and saw her uncle Ahmad Piplani, who is the husband of barangay chairperson Sarahaiva Piplani.

“As she shaded the space allotted for Binay, her uncle slapped her and commotion ensued. Her mother, tried to mediate and they were pacified by some pollwatchers. According to her account, the BEIs (board of election inspectors) were just watching and did nothing about the incident,” said Ilagan.

He added that Sitti Piplani’s uncle supposedly “crumpled” her ballot, which she then took out of the precinct as proof when she filed a report to the police.

Ilagan said they will continue relaying the reports they receive to the media.