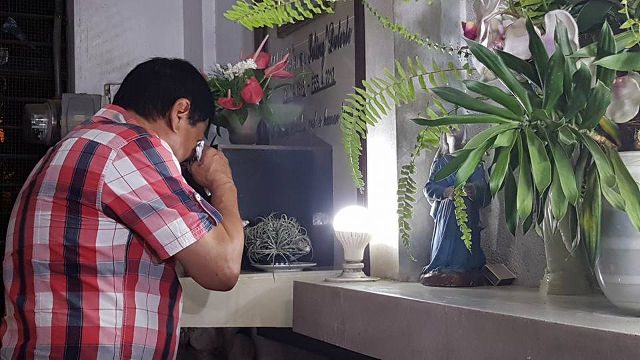 Facebook Twitter Copy URL
Copied
Duterte visits his parents' graves at around 3 am, as unofficial election results show him with a comfortable lead ahead of his rivals for the presidency of the Philippines

MANILA, Philippines – As election results point to his victory, presidential frontrunner Rodrigo Duterte became emotional during a visit to the grave of his parents, Vicente and Soleng, on Tuesday, May 10.

Duterte went to the graves at around early Tuesday at around 3 am, some hours after partial election results showed him leading.

Duterte broke into tears while asking his parents to help him rally the country.

With 87.5% of precincts already accounted for, Duterte, mayor of Davao City, is the presumptive winner of the 2016 presidential elections in the Philippines.

According to the unofficial and partial results from the Commission on Elections’ transparency server, Duterte has 14,680,126 million votes or 36.6% of transmitted votes as of 3:08 am on Tuesday.

For live updates on the aftermath of the May 9 elections, check out our extensive2016 Philippine elections coverage!