Can the OAV vote decide the vice-presidential race? Facebook Twitter Copy URL
Copied
As of 10:05 am of May 11, unofficial partial election results data from the mirror server show that only 349 of the 1,767 precincts abroad have transmitted results

MANILA, Philippines – Given what appears to be a hairline gap between the top two contenders for the vice presidency, getting 99% of the votes counted becomes even more important, according to Pulse Asia research director Ana Tabunda.

Abroad, the overseas absentee voters (OAV) appear to be the biggest bloc yet. A record-breaking 1.38 million overseas Filipino workers registered for the OAV, making them a potential game changer in the 2016 elections.

Locally, an estimated 3 million votes have yet to be transmitted from the precincts.

As of 10:05 am of Wednesday, May 11, unofficial partial election results data from the mirror server showed that only 349 of the 1,767 OAV precincts have transmitted results.

Global turnout for the OAV is currently at 33.93%. If current turnout holds, only roughly 350,000 votes might still be expected from the OAV.

Our computations show that Ferdinand Marcos Jr’s share of these remaining expected votes will not be enough to turn the tide in his favor.

Leni Robredo, who is leading the national count back home, ranked 3rd in the OAV vote, with 24,795 votes or just about 19.5% of totalso far. (See graph below) 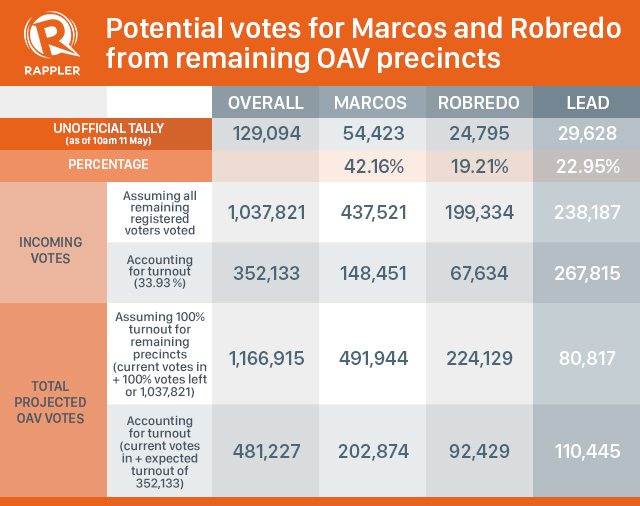 Thus, should the turnout and voter share patterns hold, expected OAV votes will narrow the gap between Marcos and Robredo by 80,817 votes but Robredo could still lead by 144,509 votes.