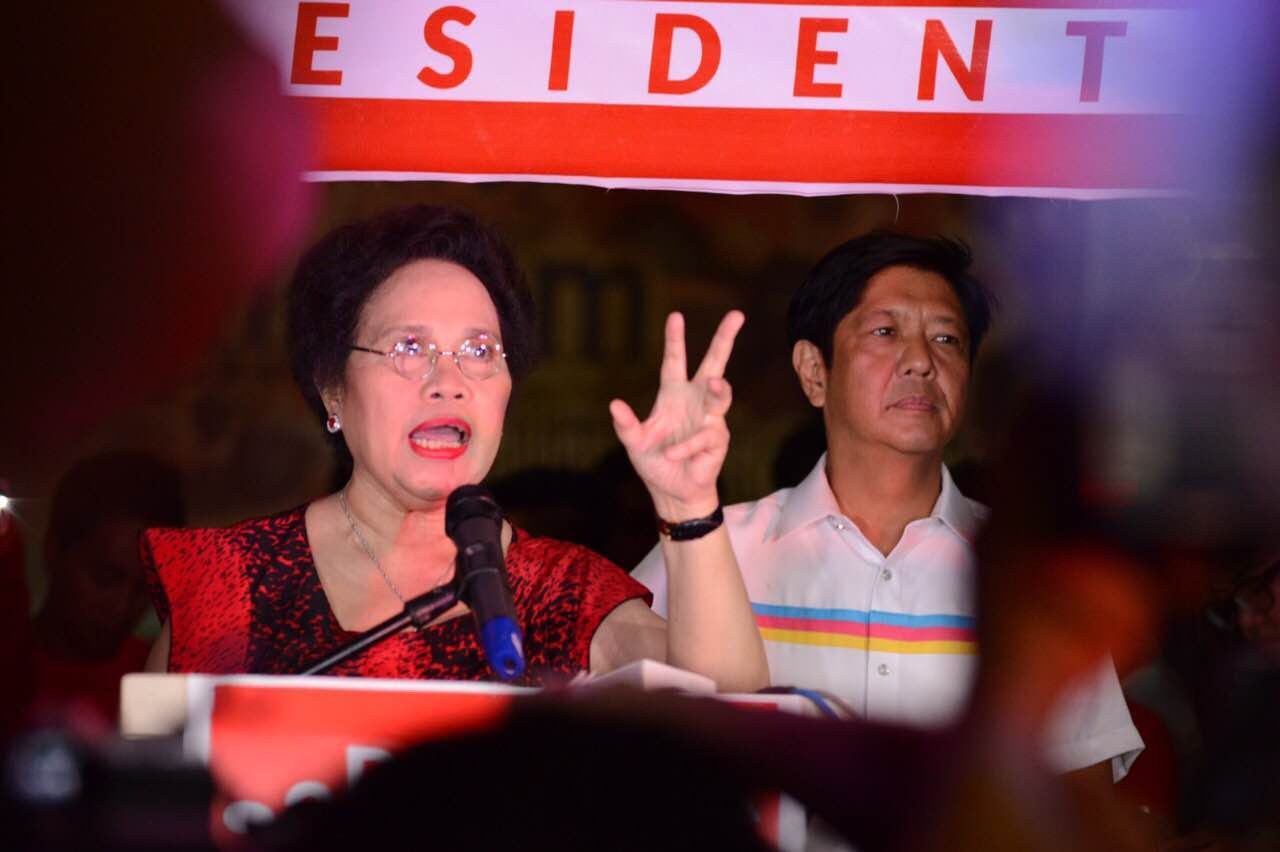 Facebook Twitter Copy URL
Copied
Citing her running mate's numbers in the unofficial vote count, Santiago likens the current administration to an 'authoritarian government' which 'feels free to manufacture numbers as they are needed'

MANILA, Philippines – Senator Miriam Defensor Santiago on Wednesday, May 11, echoed the questions of her running mate on the lead of administration candidate Leni Robredo in the vice presidential race.

Santiago indirectly accused the Aquino administration of  “manufacturing numbers” though she only based this observation on Robredo’s rise in the partial unofficial count, as well as in preelection surveys conducted by different polling firms.

“I find it astounding that Marcos should have led in the vice presidential surveys for many months, until the penultimate month, when suddenly the administration could jump up survey results to finally overtake him,” she said, sharing the observation of her running mate, Senator Ferdinand “Bongbong” Marcos Jr.

“This is an eventuality that will cause the people of the democratic world to shake their heads and question the values of society it produced,” said added.

Citing Marcos’ numbers in the unofficial vote count, Santiago likened the country under the current administration to an “authoritarian government.”

“The roller coaster ride of vice presidential candidate Ferdinand Marcos Jr invites comparison with a garrison state. In such a state, the authoritarian government feels free to manufacture numbers as they are needed,” she said.

Marcos initially led the race during the first few hours of the transmission of election returns on May 9, 5 pm.

His lead continued but the margin between the two tight contenders narrowed from about a million to just a few hundred thousand. By 3:40 am of May 10, Robredo snatched the top spot from Marcos.

Marcos quickly alleged the possibility of cheating in the unofficial results due to the sudden surge of Robredo’s votes. (READ: Unyielding Marcos says Robredo’s rise in tally ‘strange’)

The Marcos camp also insinuated dagdag-bawas (point shaving) by citing two reports where Senator Francis “Chiz” Escudero lost more than 30,000 votes at the time Robredo earned the same number of votes. It insisted on the allegation even after GMA-7 had already apologized for the error.

Robredo denied cheating in the elections and questioned Marcos about the basis of his allegation. She even said in an interview on GMA-7 that she will step down if she finds out the results were rigged. (READ: Robredo to Marcos: Cheating allegations unfair, wait for final count)

In the last weeks of the campaign period, Marcos held the top spot in preelection surveys but Robredo was at second place, just a few percentage points away. She first topped the polls in the Social Weather Stations survey released on April 25: her rating was at 26% versus Marcos’ 25%, a 7-percentage point surge over her previous rating in the same survey.

In the final ABS-CBN-commissioned survey conducted by Pulse Asia Research Incorporated; the SWS mobile survey; and the Standard Poll conducted by Laylo Research Strategies, Robredo soared to first place in a statiscal tie with Marcos. In the last Standard Poll released before the elections, she was 2 percentage points ahead of Marcos.

When Robredo’s ratings soared, Marcos himself questioned the survey results and alleged they had been manipulated to “condition” the minds of the voters. Courting voters in Cavite on the final days of the campaign, he warned them of the ruling party’s supposed Plan B, which is to make Robredo win and impeach then leading candidate Rodrigo Duterte, which Robredo categorically denied.

Robredo had since slammed Marcos’ allegations, saying that he only challenged survey results when he lost the top spot. – Rappler.com

Editor’s Note: We initially wrote that CNN Philippines copied the wrong infographics GMA published. The phrase has been removed and we apologize for this.