May 11, 2016 6:04 PM PHT
Patty Pasion
Facebook Twitter Copy URL
Copied
Despite airing its suspicion to the public, Marcos' camp is still uncertain whether the alleged new codes in fact altered the count 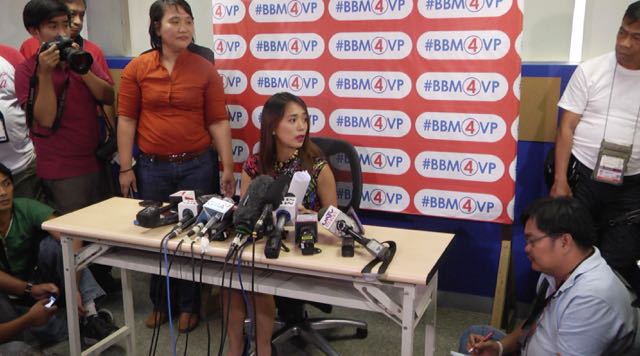 MANILA, Philippines (3rd UPDATE) – The camp of vice presidential candidate Ferdinand Marcos Jr alleged on Wednesday, May 11, that a new computer command was introduced to the Transparency Server of the Commission on Elections (Comelec) that could have boosted the votes of his rival Leni Robredo.

“We received an unsettling information that at past 7:30 pm on May 9, election day, a new script was introduced to the Transparency Server,” the camp said in a statement.

“Apparently, the execution of this computer command was able to alter the hash code of the packet,” they added.

They pointed out that after this new script was introduced, Marcos’ lead over Robredo started to “erode at a rather distinctive pattern.”

In the first few hours after results transmissions started past 5 pm Monday, Marcos was leading Robredo by about one million votes. By past midnight, Robredo had overtaken him by a few hundred votes. (See the history of the transmissions for vice president race here.)

In response, Robredo’s spokesperson Georgina Hernandez said that Marcos should formalize his allegations by filing a complaint with the Comelec.

Hernandez said the allegations made the vice presidential candidate were surprising because it ran counter to the “positive” feedback from foreign election observers, who reportedly said 2016 was the “cleanest, fastest elections that the Philippines has had.”

“So that makes us think what the basis of allegations are,” she told Rappler.

Robredo earlier decried as unfair Marcos’ allegation of cheating, urging her opponent to wait until all votes have been canvassed.

“There was a point in the counting when we trailed behind. While I was trailing, it was depressing but we never hurled unfair accusations. We never said that Senator Marcos was leading only because he was cheating. Because I think that’s a very unfair accusation,” she said in Filipino on Tuesday.

In a press conference Wednesday afternoon, Francesca Huang of Marcos’ legal team said they got the information from an accredited observer at the Parish Pastoral Council for Responsible Voting (PPCRV) center, where the Comelec’s Transparency Server was located.

Huang refused to disclose the identity of the observer, but said he/she has “a particular background in IT (information technology).”

Despite airing their suspicion to the public, Marcos’ camp is still uncertain about the effect of the alleged new code inputted in the server.

She said the kind of information they are awaiting is the movement of the difference of the votes in relation to the entry of the new command.

Marcos’ camp has filed a letter to the Commission on Elections on Wednesday to shed light on their claim.

Earlier on Wednesday, Huang said the Marcos camp would release data that would substantiate its claims of discrepancies in the unofficial count of the elections. She later said the legal team is still preparing the information and is expected to announce it in another press briefing on Thursday, May 12. – Rappler.com