Bichara could be Duterte’s ‘big guy’ in Bicol 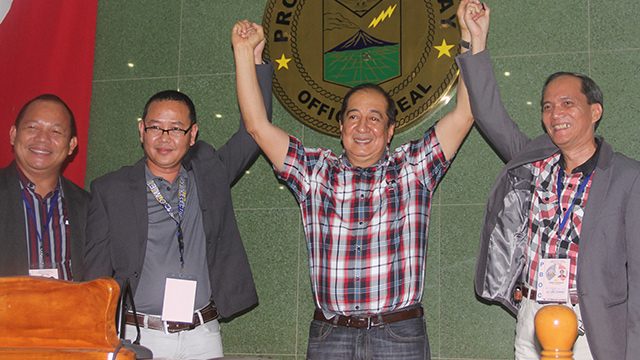 LEGAZPI CITY, Philippines – Albay 2nd District Representative Al Francis Bichara, the incoming provincial governor and one of the convenors of “One Bicol”, could be the regional chairman of PDP-Laban, the party that catapulted president-elect Rodrigo Dutete to the presidency.

Dante Jimenez, convenor of One Bicol and chairman of Volunteers Against Crime and Corruption (VACC), told Rappler that outgoing congressman and governor-elect Bichara is Duterte’s person in command in the Bicol region.

Jimenez visited Bichara in his hotel at Pepperland, where the duo reexamined Duterte’s campaign sorties across the region and discussed matters pertaining to Duterte’s proclamation.

The One Bicol for Duterte 2016 movement was formed to deliver a combined one million votes for the Davao City mayor.

The One Bicol politicians include:

While reelected governor Tallado of Camarines Norte was affiliated with Poe’s candidacy, he secretly helped Duterte’s campaign in his province, providing the vehicle from the Daet aiport, including election paraphernalia and media mileage.

These Bicol politicians showed their strong support for Duterte and his runningmate Senator Alan Peter Cayetano in a rally in Daet and Naga City a few days before elections.

Bichara said that if offered he is willing to accept the post to help Duterte with his programs in the countryside.

One Bicol expects that many local politicians will be jumping ship as early as today. Outgoing governor Joey Salceda changed from yellow to white, Poe’s signature campaign color.

During the proclamation event of the members of the board of canvassers, Salceda wore a blue T-shirt, an indication, according to political observers, that the outgoing governor and incoming second district representative was willing to join Duterte’s camp.

As this developed, Bichara said that he would institute general cleaning and accounting upon his assumption of his gubernatorial post, following reports that outgoing governor Salceda has more than a P1-billion loan that will be left behind.

Bichara said he will resume his initiatives in the past, specifically on agricultural production through an agri-summit.

“We will renew the cacao plantation in the province with inter-cropping for cash craft to help our farmers and for us to be a major supplier in the country and even abroad. I will work and seek the help of my fellow ambassadors to export our cacao product, provide jobs and income to our farmers,” he said.

He added he intends to modernize a soil laboratory to know land classification and identify suitable plants to be planted for agriculture and food production, as well as those able to withstand climate change.

“We will ask assistance and partner with the research and development of the universities in Bicol, specifically Bicol University. We will breed agri products adaptable to our place and not from the national government who make policies for the countryside,” he said.

Bichara said that elections are over and he wishes to reach out to each and everyone of the Albayanos to set aside political differences.

“As your newly-elected governor, I will exert all efforts to bring Albay to a new height of prosperity, promote employment and tourism, maintain peace and order, and improve the quality of life of Albayanos. Our province will continue to be the model for Disaster Risk Management and relief assistance,” he said.

When he was governor from the mid-90s to 2004, Bichara pioneered the zero casualty goal of the government before disaster hits. He said that he can only be a good leader if the Albayanos will rally behind him.

“I have no personal agenda as Governor, except to work for the benefit of Albayanos and promote Albay as the best and safest province to live in, in the Philippines. Together, we will face challenges that will confront us and work for the common good with honesty, integrity and transparency. Good governance in public service will mark my administration as governor of Albay. The best is yet to come with us working together in harmony. Magturuwang kita gabos (Let’s work together),” the incoming governor said. – Rappler.com